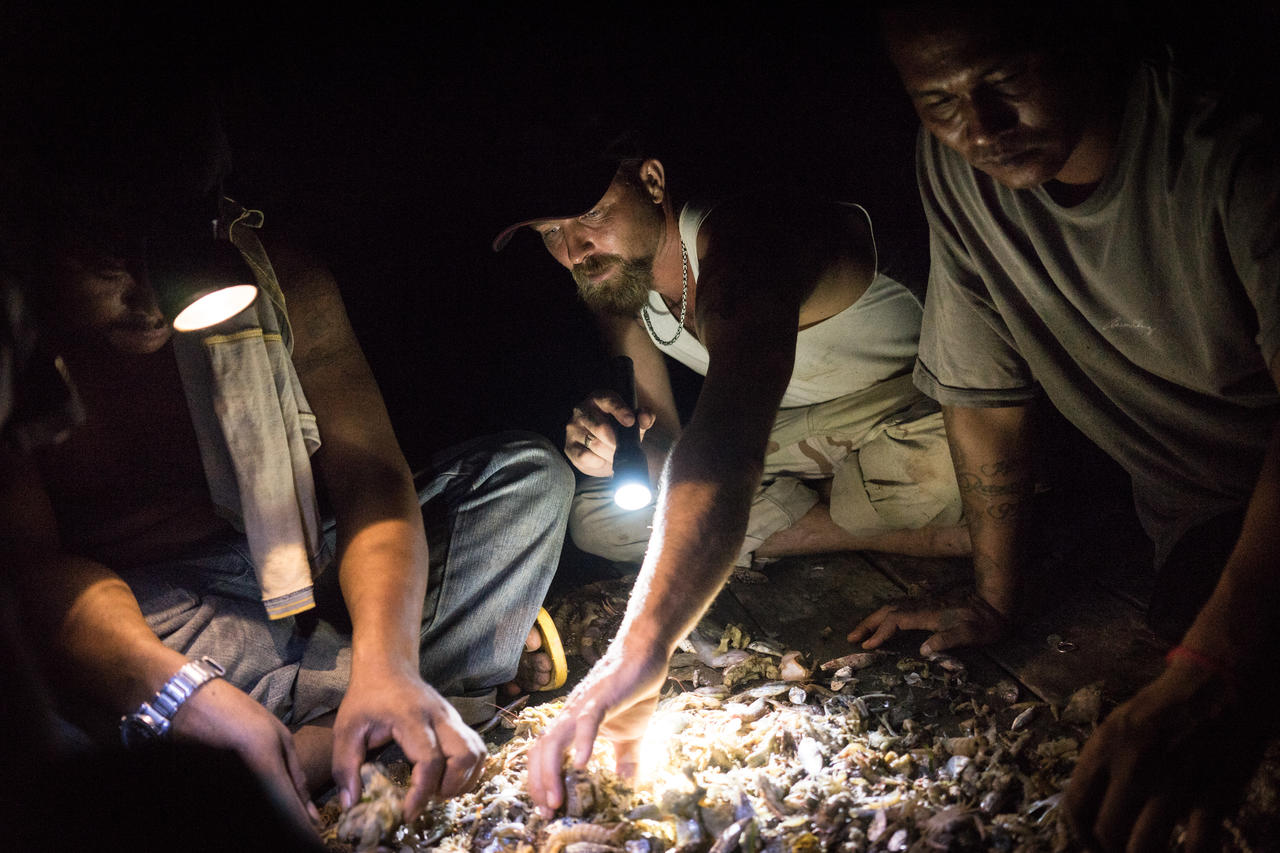 Paul Ferber and his deckhand Puppet stand wide-legged at the bow of their charging vessel. A lopsided half-moon brightens the night, reflected in a shimmering pyramid of light upon the bay. The pair are silhouettes until Puppet flashes on a search lamp and points it ahead. Revealed in the beam, like an apparition, a cracked and peeling fishing boat appears out of the darkness. Its smoky engine pops and bangs, a deep, desperate rattle, the sounds like quick-burst gunshots, as it begins fleeing. Puppet struggles to keep the search lamp steady as they chase after it, illuminating leaping silvery fish in its quivering beam.

“Grab the net!” roars Ferber as they near the vessel. The fleeing boat has become fully consumed in its own smoke, looking less like a watercraft now and more like a storm cloud.

Puppet reaches under the bow and extracts a long, hooked pole. He hands it to Ferber as they near the vessel’s stern, where the trawling net rests.

Ferber dives from the bow, stabbing with the pole. He snags the net, and yanks, but it stays put. Behind, the captain cackles a sharp, wild laugh, like the chortle of an exhilarated video-gamer, audible even over the wind and the roar of two overworked engines: Hah-hah! They fall behind the trawler and zip in for another

continue reading http://narrative.ly/on-a-mission/the-fe ... ed-waters/
Cambodia Expats Online: Bringing you breaking news from Cambodia before you read it anywhere else!

Re: THE FEARLESS ECO-VIGILANTE OF CAMBODIA’S TROUBLED WATERS

When first interviewed about his life back in England, he said he had been a police officer in Whitehaven. The next time he revealed that he had been fired from that job. The third time he said that he had actually been fired towards the end of police training, and thus had never officially been an officer. Why was he let go? For stabbing a bullying colleague in the hand with a fork in the officer’s canteen.

That’s his room, man,” Haissoune said, pointing toward a mattress standing upright, where Ferber sleeps in the open with his wife Sal, joined often by one or two of their five pitbulls. They also have four young children that are raised on the island.

Re: THE FEARLESS ECO-VIGILANTE OF CAMBODIA’S TROUBLED WATERS

For those so quick to criticise, remember this chap was not good enough to be a policeman.
Ask yourself, what would you do if you found yourselves in such a circumstance?
Top
Post Reply Previous topicNext topic
3 posts • Page 1 of 1