Cambodia news in English! Here you'll find all the breaking news from Cambodia translated into English for our international readership and expat community to read and comment on. The majority of our news stories are gathered from the local Khmer newspapers, but we also bring you newsworthy media from Cambodia before you read them anywhere else. Because of the huge population of the capital city, most articles are from Phnom Penh, but Siem Reap, Sihanoukville, and Kampot often make the headlines as well. We report on all arrests and deaths of foreigners in Cambodia, and the details often come from the Cambodian police or local Khmer journalists. As an ASEAN news outlet, we also publish regional news and events from our neighboring countries. We also share local Khmer news stories that you won't find in English anywhere else. If you're looking for a certain article, you may use our site's search feature to find it quickly.
Post Reply Previous topicNext topic
11 posts

Owned by a billionaire’s daughter and her husband, the home is “theatrical” and has “been described, with good reason, as the most beautiful house in America,” the luxury magazine said.

One particularly impressive image showed a two-story central courtyard with several empty pedestals off to one side. The pedestals weren’t actually empty, though: The photo had been altered. Another version of the same photo, discovered by reporters on the website of the home’s architect, shows ancient Khmer sculptures resting on the same pedestals.
The Cambodian government says those stone relics, depicting the heads of gods and demons, match a set that was looted years ago from one of the nation’s sacred sites.

It is not clear who modified the photo or for what reason, but experts interviewed for this story confirmed that the sculptures had been edited out of the magazine image.

The owners of the San Francisco mansion are lawyer and author Sloan Lindemann Barnett and her husband, Roger Barnett, an executive at a nutritional supplements company. The couple, who purchased the property through a limited liability company, did not respond to email and phone messages from reporters.

The Cambodian investigation into the family’s collection goes beyond one set of statues. The stone artifacts in the San Francisco home appear to have come from a larger collection of Khmer relics held by Lindemann Barnett’s billionaire parents, Frayda and the late George Lindemann.

The parents’ collection appeared in an earlier Architectural Digest spread, in 2008, described as “one of the greatest collections of Southeast Asian art in private hands.” Those photos show their Palm Beach, Florida home crowded with Khmer antiquities, many of which the Cambodian government suspects were looted. Two of them appear to match artifacts that rank among the country’s 10 most important stolen relics, the government says. 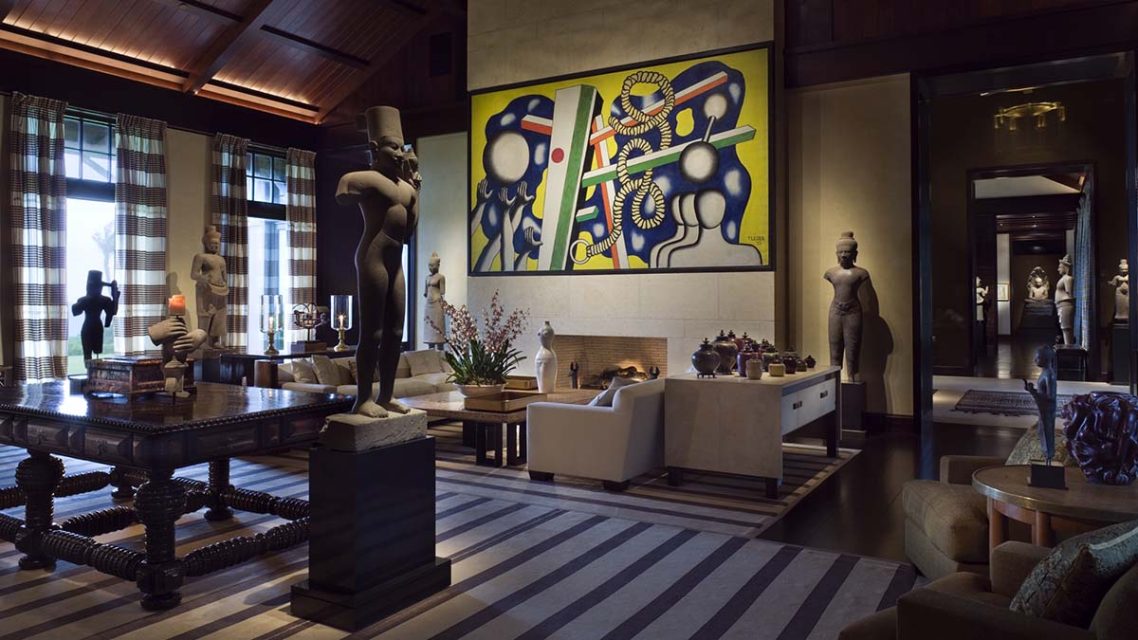 Photo of home interior showing artwork and sculptures
One of several photos from a 2008 issue of Architectural Digest showing George and Frayda Lindemann’s Palm Beach mansion and their extensive collection of ancient Khmer relics. The Cambodian government has identified more than 20 statues in the home they suspect were looted. Image: Scott Frances
https://www.icij.org/investigations/pan ... -magazine/
Join the Cambodia Expats Online Telegram Channel: https://t.me/CambodiaExpatsOnline

Ancient relics everywhere, with a hideous painting! Serious mismatch there.
Once you've read the dictionary, every other book is just a remix.
Top

I was wondering where those statues my militia mate scavenged and sold for $42 in 1987 went to.
Silence, exile, and cunning.
Top

The law only applies to the poor.

Agreed, if this is the most beautiful home in America, the photos don't do it justice.
Top

Are you serious? I have a nice little spot on my balcony that could benefit from an ancient relic, if "your mate" is still around lol.
Once you've read the dictionary, every other book is just a remix.
Top

The tony $42 million Peter Marino-designed San Francisco manse was the subject of a multi-page spread in the January 2021 edition of the magazine. A spokesperson for Architectural Digest said that photoshopping was required by “unresolved publication rights around select artworks,” but an eagle-eyed attorney working for Cambodia’s Ministry of Culture and Fine Arts who originally spotted the empty plinths indicated their resemblance to a pair allegedly taken from one of the country's most sacred sites a few years ago.

“It’s easily one of the most important statues in the temple, and probably all of Koh Ker,” Bradley J. Gordon is reported to have told the International Consortium of Investigative Journalists (ICIJ). “By having this in their collection, the Lindemanns essentially had the Cambodian equivalent of a sarcophagus stolen from King Tut’s tomb sitting in their living room.”
Join the Cambodia Expats Online Telegram Channel: https://t.me/CambodiaExpatsOnline

Those photos show their Palm Beach, Florida home crowded with Khmer antiquities, many of which the Cambodian government suspects were looted. Two of them appear to match artifacts that rank among the country’s 10 most important stolen relics, the government says.

I think that is a Fernand Léger painting. FYI Joseph Fernand Henri Léger (French: [leʒe]; February 4, 1881 – August 17, 1955) was a French painter, sculptor, and filmmaker. In his early works he created a personal form of cubism (known as "tubism") which he gradually modified into a more figurative, populist style. His boldly simplified treatment of modern subject matter has caused him to be regarded as a forerunner of pop art.

Fernand Léger paintings can fetch up to $70 million...

It's hideous.
Once you've read the dictionary, every other book is just a remix.
Top
Post Reply Previous topicNext topic
11 posts