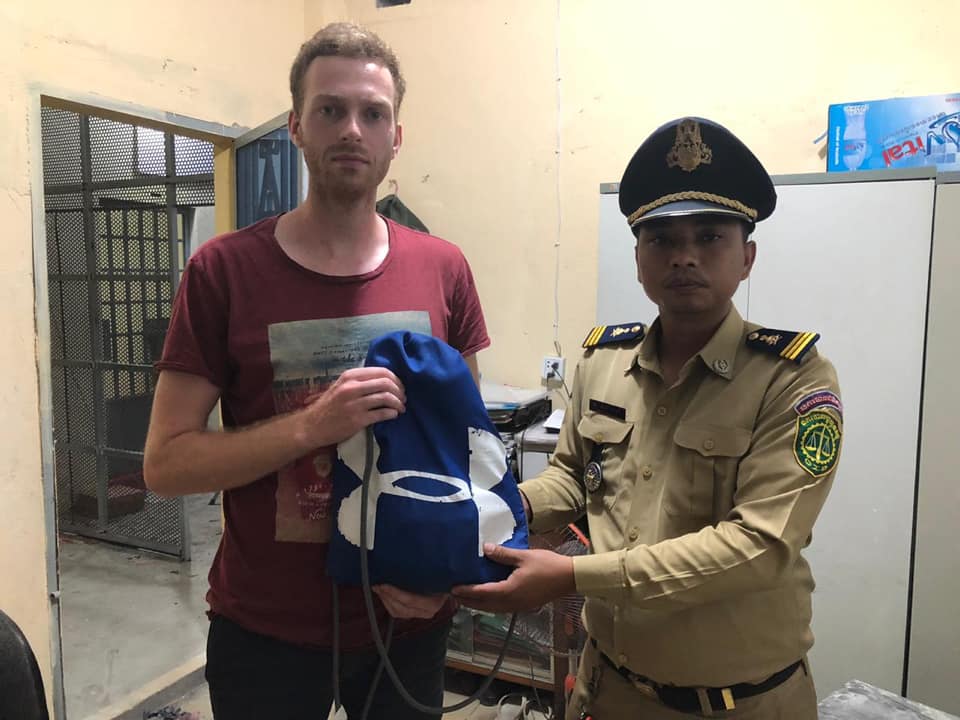 The police recovered a blue bag which contained an iPhone6, and a book. The police are preparing the suspect's case and are searching for the other thieves in his bag-snatching gang.
Cambodia Expats Online: Bringing you breaking news from Cambodia before you read it anywhere else!

Glad to see they pinched the MFer. I saw it go down. Was riding south on Sisowath when two jaos sprinting headlong, dashed in front of my bike. Almost laid it down. Right in front of Deja Vu. One threw a bag to the ground and i heard what sounded like a breaking sound. The athletic looking German was hot on their heels. Good on him. My kgf riding pillion said she saw someone, a tuk tuk driver maybe, trip one of the jaos up.

Yeah I know they’re poor, desperate and drug addled but... I hate those mothershaggers.

I imagine the thief was far from pleased when he found an iPhone 6, which by Cambodian standards is very old. Most of people I know have much newer models, poor German.
Top

You know, some people don't give a fuck about phones.
Top

Careful when wandering around on riverside and in that area of Phnom Penh. Tourists are getting their bags snatched there on an almost daily basis as the Khmer New Year approaches.

The police recovereded the woman's bag, which had Vietnamese money for 410,000 dongs, an iPhone7, a driving license, three master cards.

Before the incident, the victim went to sit at the riverside and carried a little black day bag . Two thieves came to stand behind the victim and snatched her bag, then they tried to run away to escape. The victim screamed for help. The local police who were on patrol arrived to detain one of the suspects and took him to the Psar Kandal 1 police station for questioning. The other thief got away, but is being sought by police.
Cambodia Expats Online: Bringing you breaking news from Cambodia before you read it anywhere else!

I think the Cambodian police get a bad rap by expats in Cambodia.
If this sort of crime would have happened in Europe I doubt very much the offender would be caught at all, possibly it would be recorded on CCTV but that's as far as it would go.
There are no police on the streets of Europe walking the beat,where in the past there would be a policeman on every street corner now you only see them racing around in cars turning up mob handed.
At least here there are still police on ever corner and for the two offences above both both thieves were caught near the scene. Good on them.
Top

Police are expensive in the West. They are professionally trained, well equipped and backed up. They have dogs, SWAT, even helicopters. Khmer cops? They are cheap. So cheap that they work as tuk tuk/taxi drivers, tour guides, and require daily bribes in order to survive.

In the past when cities were small and compact in the west, the cops walked the beat. Cities are now so large and cops are so few (what percentage of the population are cops in the west?), they have to go in cruisers to cover the area.

In Cambodia, lots of the thieves operate as gangs and are well known to the local cops. They have their own home to sleep in, a boss that gets them out of jail if arrested and pays for medical treatment if they get hurt.
Top
Post Reply Previous topicNext topic
7 posts • Page 1 of 1