Breaking news from Cambodia can be found here. CEO often finds Khmer news and translates it into English for our readers if it is interesting to expats, locals, Cambodians living abroad and anyone who wants to stay informed of the latest local and international news stories about Cambodia and our neighbors in South East Asia. There are many sources for Khmer news articles and they can all be found here in one place. Most of the media comes out of Phnom Penh, Siem Reap or Sihanoukville, but we cover national Cambodian news from all provinces.
Post Reply Previous topicNext topic
25 posts

Phnom Penh, Cambodia News: A 68 year old British expat, Roy Brown, is in critical condition in Calmette Hospital and reportedly has bleeding in his brain.

Roy Brown is the owner of Ream Yacht Club in Sihanoukville. He apparently received such terrible medical services at a hospital in Sihanoukville that he plans to sue them for malpractice. 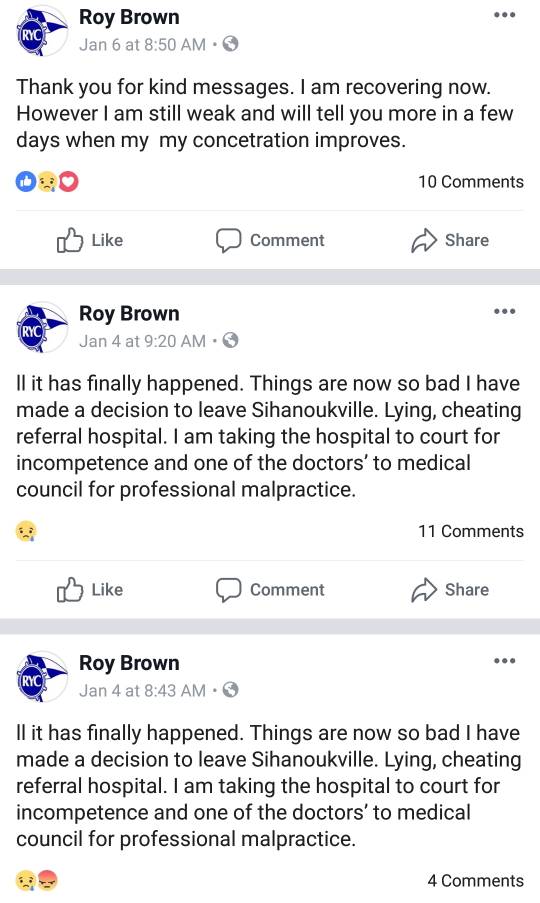 His posts on social media and some responses from the above screenshots:

lt has finally happened. Things are now so bad I have made a decision to leave Sihanoukville. Lying, cheating referral hospital. I am taking the hospital to court for incompetence and one of the doctors’ to medical council for professional malpractice.

Thank you for kind messages. I am recovering now. However I am still weak and will tell you more in a few days when my my concetration improves.

Roy has taken a turn for the worse. In ICU in PP. Postive thoughts n prayers do n will help. .

Hi Kevin apparently Tic spoke to his sister on Sunday night. He had a major brain hemmoarage,bit his tongue bad. Tic said that upon scans etc the specialists are grim. Yesterday aftnoon she foned to say he remains in ICU.

Hi Kenny Barry this is Roy's sister I spoke to tic Sunday the private hospital in p p said they thought he had a bleed on brain, he has now been taken to another hospital in p p a government hospital where tic told me they have done a scan and his brain shows nothing. A message came through later that he has broken his shoulder. Then anither message later to say they need another head scan I am waiting to hear from tic, can you keep in touch with my cousin Kevin and me please as I am unsure how to is. The message I just read from him is baffling me as thought he not talking and in severe pain last I heard today.
Cambodia Expats Online: Bringing you breaking news from Cambodia before you read it anywhere else!

Oh sihanoukville hospital. Well worse hospital! I believe that my ex-colleague died because of mis-diagnose by one the doctor!
Uh formalin cost $500! Really? That hospital should be sued. And all it's doctor need to be schooled again. Are they really a doctor still question me till today!!!

his condition has deteriorated today
Top

I guess that's Roy of the old Snooky's Bar? Friendly guy. Hopefully he pulls through.
Top

I wonder what he went to the Sihanoukville Hospital for and how he was (allegedly) misdiagnosed. And why did he move from private hospital in Phnom Penh to Calmette?
Top

owns a yacht club but goes to hospital in Cambodia...get the fuck to Bangkok and get there quickly !!
Sorry i know this guy is friends of some of you, but Whats more stupid, thinking you will get real medical care in Cambodia or thinking you have any shot in hell at suing them.

That's akin to getting aids from a dentist in Cambodia and not blaming yourself...
Freelance coder / web developer. I make REAL web applications.
c#, NodeJS, Python... Contact ME !! I work for 50c beers !!!
Top

console wrote: ↑
Tue Jan 08, 2019 9:52 am
owns a yacht club but goes to hospital in Cambodia...get the fuck to Bangkok and get there quickly !!
Sorry i know this guy is friends of some of you, but Whats more stupid, thinking you will get real medical care in Cambodia or thinking you have any shot in hell at suing them.

That's akin to getting aids from a dentist in Cambodia and not blaming yourself...

There are some good doctors in Cambodia. Just not at Calmette or SHV hospital (or even Khema!).
Royal Hospital is the least dangerous death trap out of all the death traps/ hospitals in Cambodia. It's not cheap, but one is more likely to get out alive from there...

He may have a shot at suing them if he gives tea money to the right people.. Otherwise, they'll just dismiss his case and claim that his brain issue was caused by a bad batch of rice wine...
Top

Come on, owning a "yacht club" in Cambodia doesn't make someone Bill Gates. He could have been running paddle boats and canoes for backpackers. Not everyone has money to fly to Bangkok and pay cash at Bumrungrad at the drop of a hat. And if you have an emergency type situation one evening in Sihanoukville, Bangkok may be 12+ hours away.

Have some compassion, calling a man fighting for his life "stupid" is a dick move.
Top

i have just visited Roy and apart from having a dislocated shoulder and a few bumps and bruises he looked a lot better than i expected,he is not in ICU he is still in the Emergency ward.