Thailand is Cambodia's neighbor to the West, and this forum is dedicated to Thai news, stories, reviews, blogs, videos, Thai people and anything else related to the country. A lot of expats have both lived and worked in Cambodia and Thailand, and this area is a place to discuss all aspects of life in Thailand and what's going on there. Most topics are about Bangkok and Pattaya because of their larger populations of expatriates and tourists in those cities, but this is for all things Thai.
Post Reply Previous topicNext topic
10 posts • Page 1 of 1

Australian woman's desperate messages from Thai immigration detention
15 January 2019 — 11:22am
An Australian woman has begged a friend for help after being detained in Thailand for reasons unknown.

A week after she was to fly in to Sydney, Claire Johnson messaged a friend saying she was "so scared" and asked her to contact the consulate.
Claire Johnson is being held in detention in Thailand.

Ms Johnson describes herself on social media as founder and managing director of Cosmetic Holidays International, "a medical tourism agency that offers cosmetic packages in Phuket".

On Monday night, she got in touch with her friend Juliet Potter via a series of Facebook messages, indicating she was in an immigration detention centre.

Ms Potter said she believed Ms Johnson, who was due to move into her apartment in Sydney after a year overseas, may have overstayed her Thai visa accidentally.

However, the reason for her detention is unclear.

In a statement, a spokeswoman from the Department of Foreign Affairs and Trade confirmed the department had been in contact with Ms Johnson.

"The Department of Foreign affairs and Trade is providing consular assistance to an Australian woman detained in Thailand in accordance with the Consular Services Charter," the spokeswoman said. "For privacy reasons we are unable to provide further details."

Ms Potter said she first became concerned when Ms Johnston wrote "all grand adventures end with a big bang" in a Facebook post on the day she was due to leave Bangkok.

When another friend asked what happened, Ms Johnson said "some pretty serious stuff went down," and said she would be flying back into Australia on Saturday January 12 instead.
However, she did not return, and sent Ms Potter a string of desperate messages on Monday night, starting with "help me". 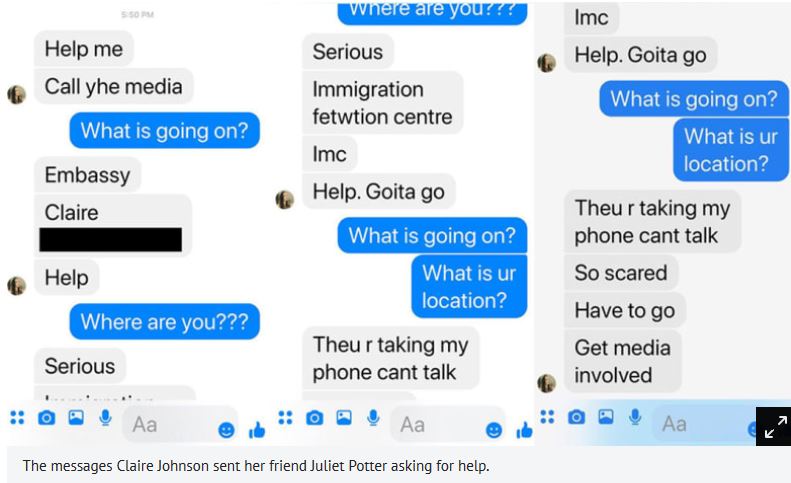 When Ms Potter asked what was going on and where she was, Ms Johnson responded by saying she was in an immigration detention centre but she couldn't talk because her phone was being taken from her.
https://www.smh.com.au/world/asia/help- ... 50rdn.html
Cambodia Expats Online: Bringing you breaking news from Cambodia before you read it anywhere else!

Was she practicing medicine in Thailand without a license?
Top

Ms Johnson describes herself on social media as founder and managing director of Cosmetic Holidays International, "a medical tourism agency that offers cosmetic packages in Phuket".

At a wild guess; no Thai work permit.
Top

I don't think she was practicing medicine. The facebook page of her company says that they use elite Thai surgeons.

If she was qualified to do tit jobs, labiaplasty, buttocks implants, etc., she'd make much more money doing it in Australia.

She probably just overstayed her visa.

She might have taken advantage of the company's services and had a little too much vagina tightening surgery, and thus become too much of a tight cunt to pay for a visa extension.
Top

may have overstayed her Thai visa accidentally.

Overstay is set at MAX 20,000 baht and if u have that and money for a ticket out u can get out<
if not you end up waiting until u go to court>


....a medical tourism agency that offers cosmetic packages in Phuket".

very popular with Australians an they use the new plastic surgery center at Bangkok Phuket international hospital.


Whatever....bottom line...she fucked up
look for a go fund me page coming soon.
In a nation run by swine, all pigs are upward-mobile and the rest of us are fucked until we can put our acts together: not necessarily to win, but mainly to keep from losing completely. HST
Top

I have been living in Thailand for past 14-15 years. I go in and out of Thailand at least once a month but most often twice. I have never gotten into any trouble.

Rules are there published so clearly yet people break the rules. I really cannot understand.
Top

https://www.stickboybkk.com/news/aussie ... GrYs39rUeY
In a nation run by swine, all pigs are upward-mobile and the rest of us are fucked until we can put our acts together: not necessarily to win, but mainly to keep from losing completely. HST
Top

She was jailed for overstaying her visa by 111 days. the Daily Mail is on the story because they have a lot of bikini photos of her: 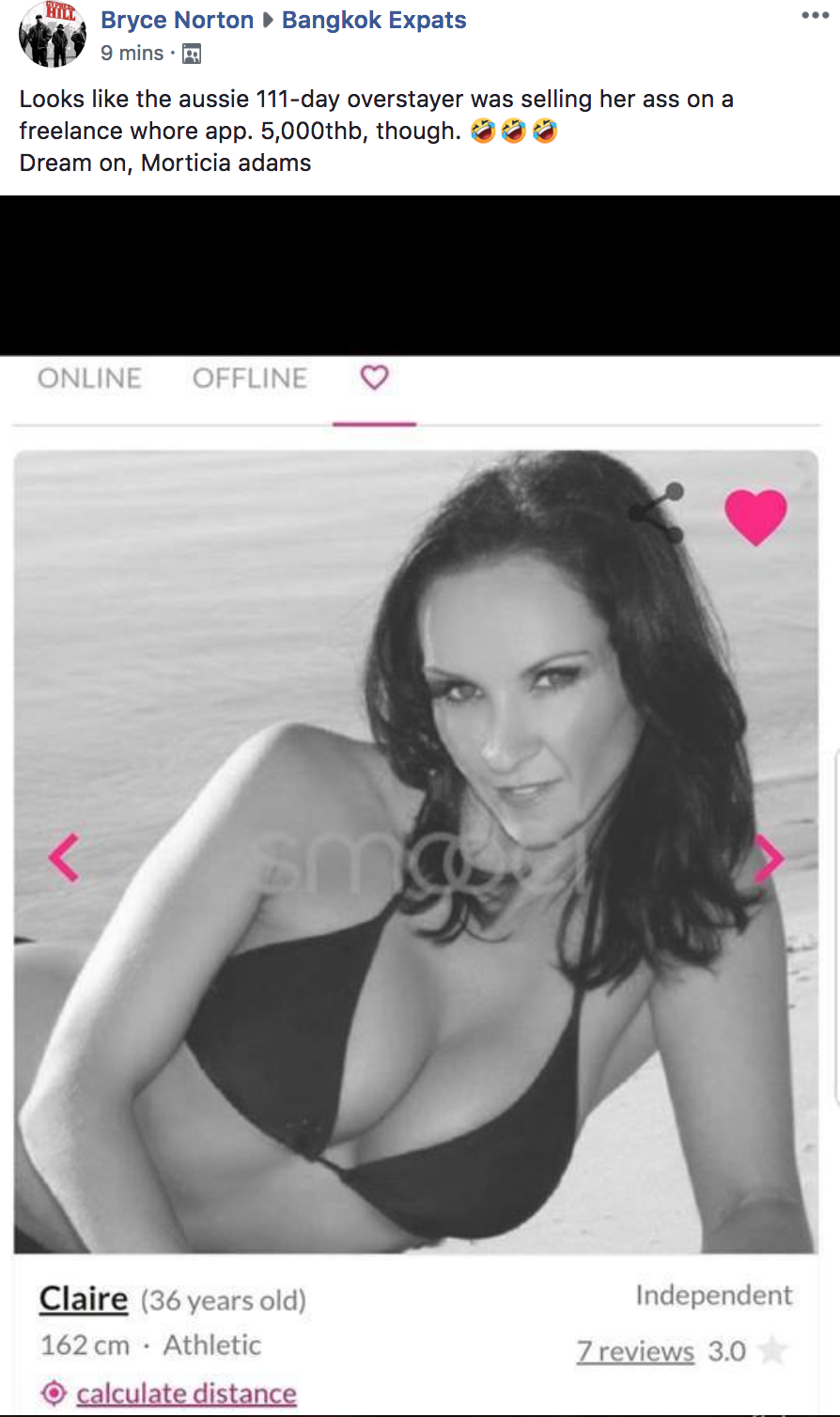 The 'victim's' story: According to her, it was everyone else's fault that she overstayed 111 days and spent 12 whole days in a detention centre.

31 January 2019
[Excerpt]
HOW IT HAPPENED
Embassy representatives didn’t arrive until the day before Ms Licciardo left the Immigration Detention Centre in Bangkok after 12 days locked up, forcing her to send frantic and desperate texts to someone back home when she briefly got her phone.

The former Gold Coaster, who’s currently back in Sydney, had been travelling since 2017 when she packed up her life to tick off places from her bucket list.

She knew she’d overstayed her visa in Thailand because she was waiting on a new passport to arrive from Australia after hers was stolen.

While she’d officially overstayed for 111 days she said she had no choice and kept being assured by the consulate and the embassy that she was following the right process.

“I didn’t mean to overstay. I was dealing with the consulate and the embassy the whole time,” she said.

“I couldn’t extend my visa because my passport was stolen and I had to wait to get all the documents like my birth certificate from Australia.

“I did everything right but every time I rang the embassy I was speaking to someone in Canberra and they didn’t know what was going on.”

Ms Licciardo said she left Pattaya, where she spent New Year’s Eve, to go via Bangkok and was going through immigration to get her new passport stamped when she was stopped.
At worst she thought she’d get a 20,000 baht fine ($880), whether official or not. She’d had one before that she still had a receipt for...
Full article: https://www.news.com.au/travel/travel-u ... 0bfb49d65e
Cambodia Expats Online: Bringing you breaking news from Cambodia before you read it anywhere else!

Users browsing this forum: No registered users and 104 guests