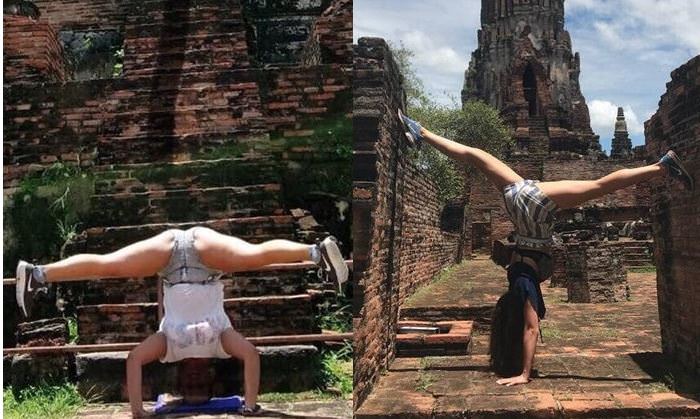 Netizens were up in arms and calling for immediate action after pictures of some foreign tourists were posted on the page of the Ayutthaya Historical Park.

In a place sacred to most Thais the foreigners – a man and a woman – were seen displaying their flesh in a series of moves including the reverse splits.

Netizens called for education that this was highly inappropriate behavior in such a place.

Most wanted the authorities to act without delay, said Sanook.

Some wanted a tent set up so that tourists could hear in different languages what was expected of them at such old, cultural sites.

Others wanted Thais to step up to the plate and have the English skills to inform tourists that this was wrong.

All felt it was just not on in Ayutthaya.
http://www.samuitimes.com/disgraceful-t ... aya-ruins/
Cambodia Expats Online: Bringing you breaking news from Cambodia before you read it anywhere else!

Problem with this one was that the people displaying their agility were PRC Chinese so having English skills would not have helped.
You don't stop riding when you get old, you get old when you stop riding
Top
Post Reply Previous topicNext topic
2 posts • Page 1 of 1