Eating in the UK during the 50's

If you have something so weird, strange or off-topic to post and think it doesn't belong in any other forum; you're probably right. Please put all your gormless, half-baked, inane, glaikit ideas in here. This might also be a place where we throw threads that appear elsewhere that don't belong ANYWHERE end up, instead of having to flush them. FORUM RULES STILL APPLY.
Post Reply Previous topicNext topic
13 posts

Eating in the UK during the 50's 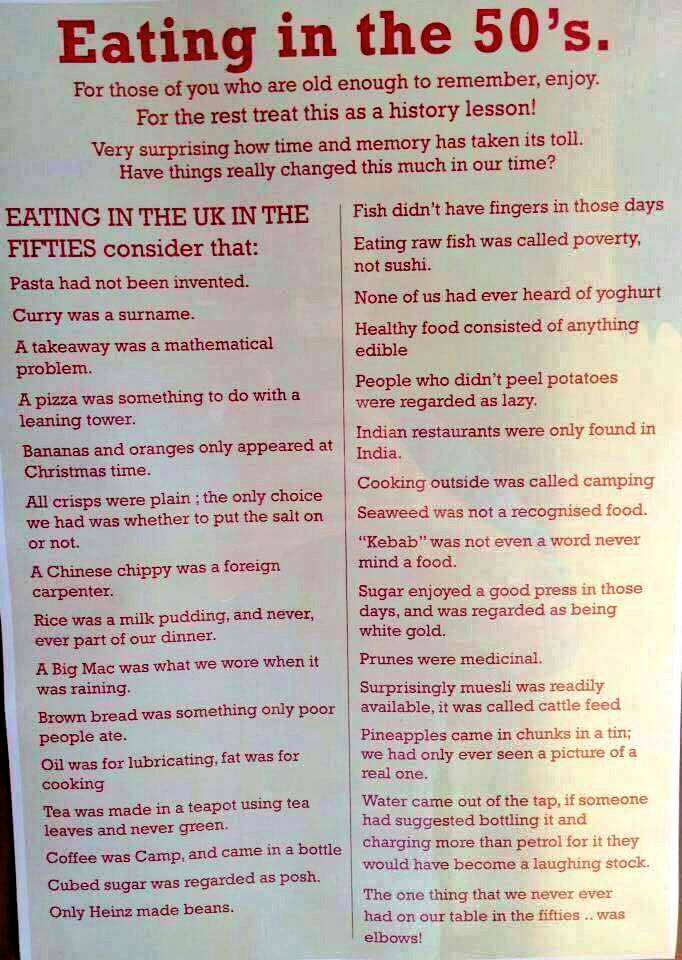 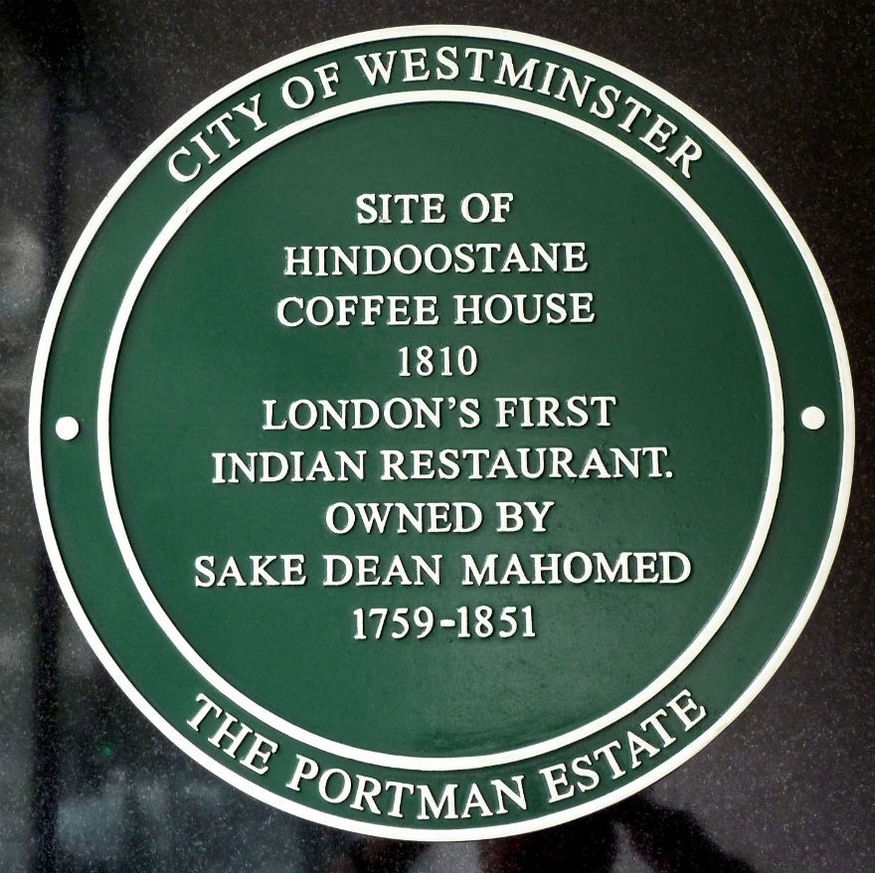 the first chinese restaurants opened around 1909, it was actually during the 50's that they became a popular thing

if takeaways were only to do with maths, im not sure what people were doing with their fish and chips wrapped in newspaper lol

fish fingers were invented in the 1950s

it's obviously just a put on.

[b] One hates to say so caddish a thing, but really & truly this is about class and - to some extent - geography:

Posh people - and those a lot poorer but still cosmopolitan and sophisticated - in London and even in Liverpool and Manchester
1 ... knew about *real* pasta and cooked it often (NOT the tinned spaghetti suitable for Arctic explorers)
2 ... cooked and ate curry
3 ... ate oranges,bananas, pineapples and even grapes throughout the year
4 ... cooked and ate rice (but NOT - at that time - brown rice)
5 ... adored Hovis and other forms of brown bread (UNSLICED)
6 ... drank green tea
7 ... drank real coffee (NOT Nescafe, deemed suitable for Arctic expeditions - like tinned spaghetti)
8 ... knew about and consumed yogurt (which makes a brief appearance in Evelyn Waugh*s novel *Handful of Dust*)
9 ... cooked with olive oil (as Elisabeth David told them to) - although even quite prosperous households remained unswervingly loyal to hideous white lard
10 ... scrubbed and cooked unpeeled potatoes, urged to do so by the aforesaid Elisabeth David

A young woman blurted out *I was raised by savages - I was nearly twenty before I had spaghetti which hadn*t come out of a f-cking tin!* [/b]
Top

Exactly, real coffee was popular and people in the UK were drinking real coffee in coffee shops well before the 1950's. The Kardomah cafes for example were a feature in many English cities, serving real coffee for quite some time.

"Kardomah Cafés were an integral part of the British High Street (as well as further afield in places like Sydney, Australia) from the Edwardian era onwards peaking in the 1960s before gradually dying out.

The last remaining cafe in the UK is perhaps the most famous Kardomah Café of them all - sited in Swansea, it was the meeting place for Dylan Thomas and his peer group of writers, artists and musicians who actually became known as The Kardomah Gang.

The cafés were an offshoot of the main business, The Kardomah Coffee Company, which was founded in Liverpool in 1845. The early 1900s saw the company start opening up cafés, including a Leeds branch on Briggate in 1908." http://news.bbc.co.uk/local/leeds/hi/pe ... 128435.stm

1930's picture of the Kardomah Cafe in Liverpool

bananas first came to the uk 125 years ago

id say youre quite gullible!

i have some beans i am prepared to swap for your moto if you think you are not!

oh and the tea bag was patented in 1902 and lipton produced tea bags in 1952
Last edited by SinnSisamouth on Thu Oct 27, 2016 11:47 am, edited 1 time in total.
i am on these blocked lists;
pucketrichard
hotdgr
sailorman
rozzieoz
stroppychops

''In the United Kingdom, Sainsburys began a pilot experiment on distributing milk in bags in 2008 in conjunction with Dairy Crest.[4] It was originally targeted at 35 stores at the same price as a regular 2-imperial-pint (1.1 l) plastic bottle of milk,[5] the product was expanded through the North of England nationwide in 2010 at which point the bags retailed at a discounted price compared to traditional containers.[6]''

https://en.wikipedia.org/wiki/Milk_bag
Check out my website for all things Kiwi in Cambodia at https://tiny.cc/j410iy
Top

i remember our little milk cartons at school (and maggie tried to take them away)
i am on these blocked lists;
pucketrichard
hotdgr
sailorman
rozzieoz
stroppychops

"fish didn't have fingers in those days" Actually fish fingers were introduced in1955.

On a similar vein, an interesting article here:

Noshtalgia
The British attitude to food has changed beyond all recognition in the past half century. So here's a little reminder of the people, trends, dishes and products that shaped the nation's tastebuds. https://www.theguardian.com/lifeandstyl ... .shopping1
Top

My two times in the UK & the cooking my brothers Brit wife had me wondering if Brits have taste buds.
More bland than Ruskie food.