Do any of you understand Cambodian superstitions?

In the following video, after a woman was killed, a man came along and jumped over her 3 times.


In some Cambodian villages, people put up what look like scarecrows in front of their properties.

One girl who went to the pagoda on a certain day, told me if they don't go, in their next life they may come back as an animal, instead of a human.

I sometimes buy chocolate flavoured drinks. Before drinking them I shake them up. Cambodian have often told me, if you shake a drink up, you will get diarrhea.

Do any of you understand, these or other Cambodian superstitions? If you do, please share.
## I thought I knew all the answers, but they changed all the questions. ##
Top

I don’t know. Just make sure you switch off your phone during a thunderstorm. Every Cambodian knows those attract lightning.

Driving your moto through the storm is fine though, as long as your phone’s switched off.
Top

Kammekor wrote: ↑Wed Jul 15, 2020 11:24 am Just make sure you switch off your phone during a thunderstorm. Every Cambodian knows those attract lightning.

In Australia, back when all phones were on land lines, people did say, if lightning hit the phone line, it could travel down the line to the phone, and get the person on the phone. Some people discouraged using a phone during a thunderstorm.

The idea probably came to Cambodia when the first landlines were installed in Cambodia, and foreigners told them that.

But they don't differentiate between phones on land lines, and mobile phones.
## I thought I knew all the answers, but they changed all the questions. ##
Top

explorer wrote: ↑Wed Jul 15, 2020 12:48 pm In Australia, back when all phones were on land lines, people did say, if lightning hit the phone line, it could travel down the line to the phone, and get the person on the phone. Some people discouraged using a phone during a thunderstorm.

This happened to my brother when I was very young, there was a massive storm, he and my sister were babysitting, I was getting hysterical, he rang my parents, who were at friends.
Lightning clap and his arm turned greeny blue, it freaked all three of us out.
Once you've read the dictionary, every other book is just a remix.
Top

I don’t think there are clear historical explanations for many of them, though it would be interesting to compile their origins if possible (though likely not as they obviously didn’t keep written records as much as western cultures did). They’re just simple superstitions like any country has (or used to have, they’re definitely rather strong at times here)
.
Mangosteen and sugar is one of my favourites. You also can can’t be a bridesmaid more than 3 times or you won’t find a man. Burying people in sand who’ve been electrocuted is a funny one, turning kids who’ve drowned upside down is a bit sad. Many aren’t really superstitions, but just ill-informed peculiarities, like the guy jumping over the body three times.
You also shouldn’t plant a frangipani on your land or you won’t be able to fix any black magic curses set upon you.

There’s also the odd “jompai”, like a banana leaf thing they put on the ground to ward off bad spirits or curses. If someone steps on one they’ll go crazy. 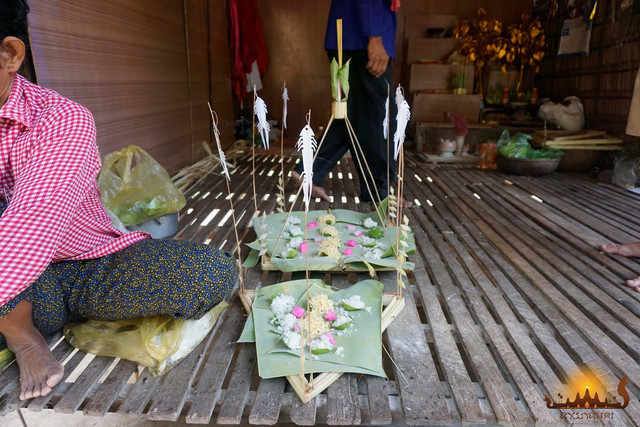 Then there’s the “neang poun”, where if they find a small stone or something stuck in a tree (where the tree growth has enveloped it and it becomes like a hard ball), it can fetch a ton of money. There was that woman a little while back who got stopped by the cops and reeducated because she joked with her friends about the cops in Battambang. The English translation was that she’d called them “monsters” which seems a bit harsh, but she actually used the term “lok poun” (like male version of it, but it doesn’t exit, that’s what’s funny). She was essentially saying: “Look everyone! I’ve found lok pouns!” with the cops in the background. So it was quite clever and funny, but she got in trouble with it. I’ve never seen one myself but apparently rich people will pay a ton of money for an original one. As people do for good luck charms here…

There are also tons of Chinese ones intertwined with Cambodian ones, so much so that it can be hard to distinguish them (lucky numbers, can’t marry on x day, dates of birth don’t match etc). I think a lot of the ones with numbers in them are Chinese. There are actually weddings called off because of numbers not matching (though it might just be an "extra excuse" by one of the families).
Ex Bitteeinbit/LexusSchmexus
Top
Post Reply Previous topicNext topic
5 posts • Page 1 of 1