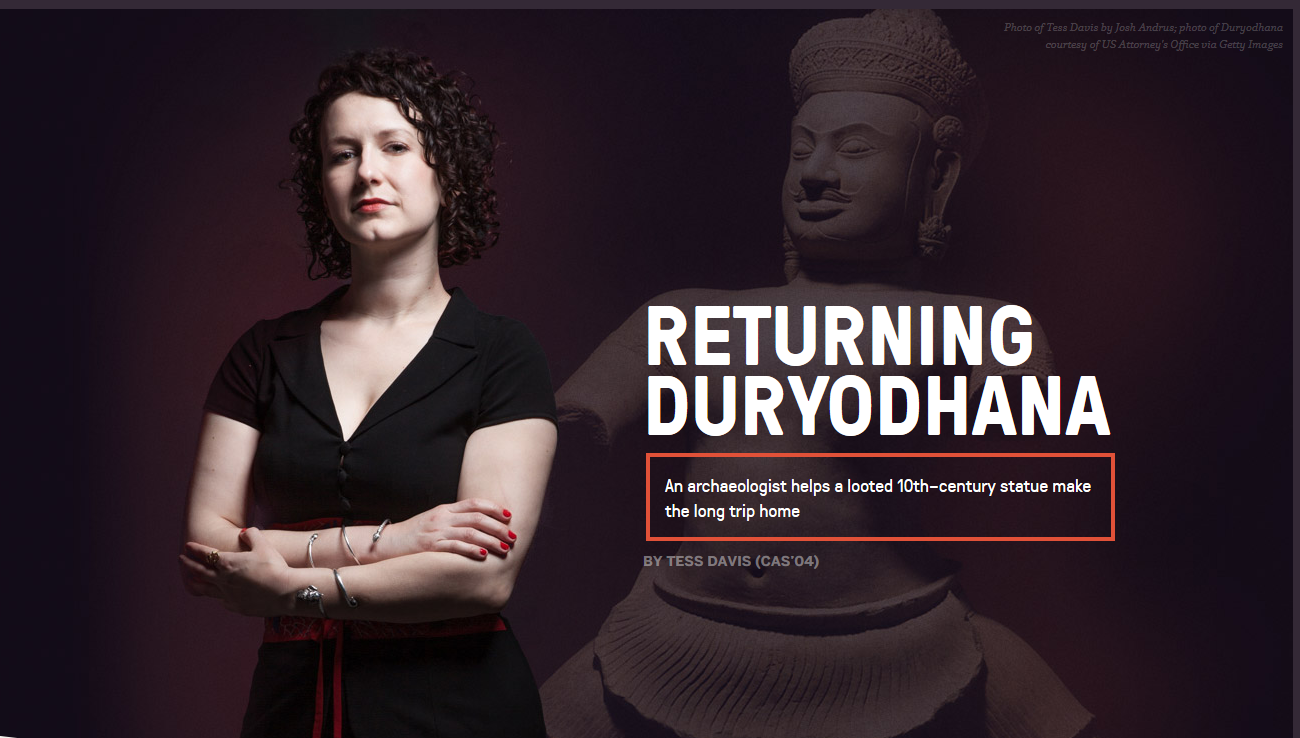 The old woman had lived through many chapters of Cambodian history: the French colonial period, independence, civil war, genocide, the Vietnamese occupation, and finally, peace.

Some villagers knew the statues had gone on from Thailand to Europe and to America. Many did not, and they reacted with a combination of shock, horror, and perhaps even a little pride when shown a glossy coffee­–table book showcasing hundreds of Khmer masterpieces now in top overseas collections. Some of the people we spoke to had helped to steal the sculptures, and many had relatives who had done the same. Their reasons were understandable. It was war. They were under orders. They were starving and needed money. Did they want to rob the temples? Of course not—it brings very bad luck. A curse even, illness and death. How to stop the looting? This was the question no one could answer. As long as foreigners wanted to buy the statues, there would always be someone to steal them.

Two years later, in 2009, French archaeologist Eric Bourdonneau confirmed Warrack’s finding. Bour­donneau made another breakthrough: the missing companion to the Norton Simon piece, matching the other fragmented slab at Prasat Chen, appeared to be on the opposite coast of the United States. In fact, it happened to grace the cover of Sotheby’s Asia Week catalog. The sale of this “highly important sculpture of an athlete” was scheduled for March 24, 2011, in Manhattan and was expected to bring in between $2 million and $3 million.

In January 2013, I joined the University of Glasgow as part of Trafficking Culture, a team made up of archaeologists, criminologists, and other lawyers. With a $1.5 million grant from the European Research Council, Trafficking Culture is working to produce a clearer picture of the illicit antiquities trade in the hope of developing effective policy recommendations to counter it. In practical terms, this means gathering and analyzing data from customs records, auction sales, and museum acquisitions, conducting interviews with key players in the art trade and law enforcement, and studying comparable trafficking markets, like those in arms, drugs, and wildlife.

On March 24, 2011, just hours before the Duryo­dhana was to go on the block at Sotheby’s, the Cambodian government intervened. Madame Tan Theany, the secretary general of the National Commission for UNESCO in Phnom Penh, contended that the statue had been looted—noting that its feet remained in situ at Koh Ker—and demanded its return. Sotheby’s refused. In the year of negotiations that followed, the auction house pressed Cambodia to buy the warrior or find a wealthy donor to do so. One such buyer did step forward, offering $1 million, but Sotheby’s wanted more.

In early 2012, I made a special trip to Cambodia, hoping to see if any of these documents had survived the war. I’d planned to spend a couple of weeks in Phnom Penh’s old French quarter, leafing through the crumbling records of the National Archives (this cream–­colored colonial building was probably under construction while Malraux was under house arrest just around the corner). But within just a few days, I found a trove of papers, enough to keep me busy (and likely will) for the rest of my career.

The fight for the Duryodhana continued for anoth­er six months, with accusations lobbed by both sides. Sotheby’s claimed that US agents and attorneys had been overzealous in their investigation and prosecu­tion, and the government claimed that the auction house had provided it with false and misleading in­formation. As Jason Felch, then of the Los Angeles Times, said, “The gloves had come off.”

full https://www.bu.edu/bostonia/summer14/cambodia/
The idea that seeing the world is going from place to place to look at obvious things is an illusion natural to dull minds.
Top
Post Reply Previous topicNext topic
1 post • Page 1 of 1