Beginning on March 5, the films will be screened across 10 venues around Phnom Penh, with admission free on a first come, first served basis, with last-minute tickets at $1.25.

While the selection of Cambodian films is not as large as last year’s, there are a handful of highlights. Among them is the premiere of Surviving Bokator, a documentary five years in the making by a Canadian crew about the Cambodian martial art.

Other local premieres include Angkar, a documentary by French-Cambodian director Neary Adeline Hay about her father’s return to Cambodia for the first time since the Khmer Rouge.

There will also be the first screening of a restored version of the film 12 Sisters (Puthysen Neang Kong Rey) by 1960s director Ly Bun Yim.

At a press conference for the festival yesterday, Ministry of Culture Cinema Department representative Sok Song said the event was another opportunity to show off the country as a potential filmmaking destination.
http://www.phnompenhpost.com/post-life- ... s-8th-year

by CEOCambodiaNews
The Cambodia International Film Festival 2018 starts in Phnom Penh next week,5-11 March. The Phnom Penh Post has done a brief review of some of the festival highlights.


In sheer size, variety and star power, little in the Kingdom compares to the Cambodia International Film Festival, now in its eighth year. Beginning on Tuesday, six days are packed with films from around the world. Filmmakers, actors and producers are flying in to attend screenings, give talks and generally soak in what Cambodia has to offer to the world of cinema.

With more than 100 films, it is impossible to provide a comprehensive “best of” guide but The Post has scoured the schedule to pick its highlights. Not included here, with some exceptions, is the astounding assortment of international films from all over the region, and beyond, which will be screening throughout the capital.

All showings are free, with a $1 charge for last-minute tickets. 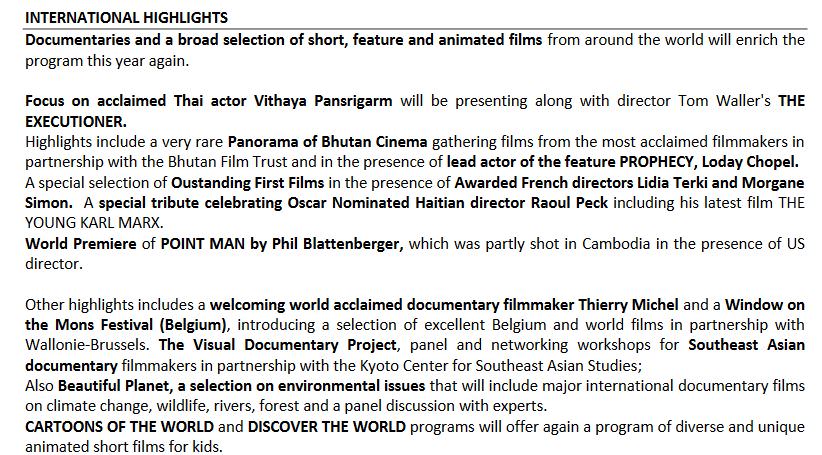 by CEOCambodiaNews
Apologies, too late for tonight but there is another screening on Saturday. 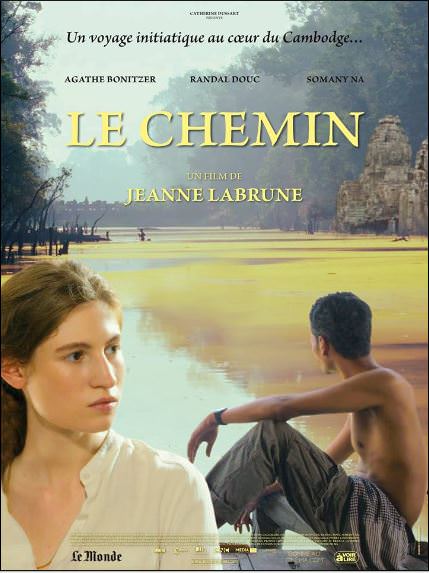 by John Bingham
I'll be checking it out. Looking forward to being in the Chatromuk Theater for the first time. 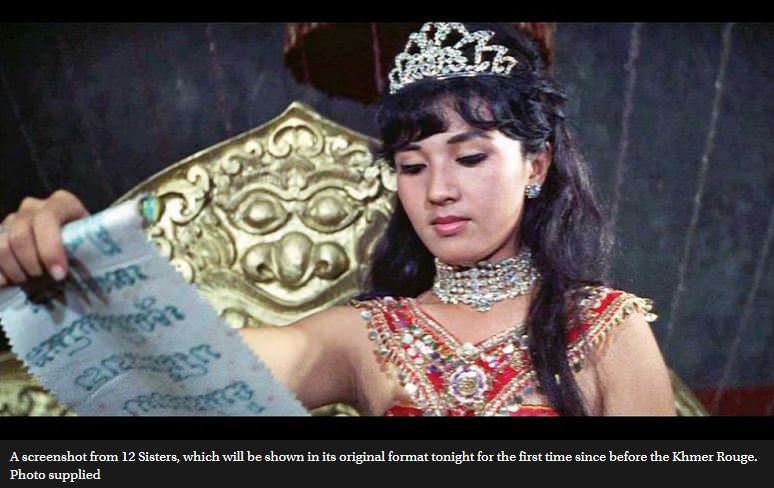 Exactly 50 years ago, the Cambodian film industry was propelled forward by the release of Puthyisen Neang Kong Rey, or “12 Sisters”, by iconic director Ly Bun Yim. It was one of the first local films shot on 35 millimetre film, not 16mm, and it used daring special effects in a way the Kingdom had not seen before – showing a flying Pegagus, gory eye-gouging and a dramatic earthquake. The story follows the hardships of the dozen sisters, who suffer from sins committed in past lives.

Between 1960 and 1975, Bun Yim produced more than 20 films. But when Cambodia fell under the rule of the Pol Pot regime, almost all of his works were lost. Just three are known to remain in usable condition today – “12 Sisters”, Sobasith and Orn Euy Srey Orn.
http://www.phnompenhpost.com/post-life- ... phnom-penh

by CEOCambodiaNews
Films from the diaspora
(Phnom Penh Post article OP)
As much as the festival is an opportunity to show local films to an international audience, it is also an occasion for some of the huge diaspora community to convene in Cambodia. Every year, Cedric Eloy says, there is at least one film from a director in the diaspora exploring ties to either their birth country or the former home of their parents. This year, there are three films exploring these themes, including The First Generation – Memoirs of Cambodia by Kemara and Abraham Pol, which is an oral history project about five people now living in Austria who fled the Khmer Rouge regime.

The filmmakers will be present for the screening, which will be the film’s Cambodia premiere. There will also be two documentaries with remarkably similar themes from diaspora directors continents apart. French-Cambodian filmmaker Neary Adeline Hay’s Angkar was inspired by her lack of understanding about the experiences of her parents under the Khmer Rouge. In the documentary, her father returns to Cambodia for the first time to face his past. Meanwhile, the short documentary film A Life Like This, by New Zealand director Isaiah Tour, shows the director trying to get closer to his father by making a film about him – an attempt to unpack the details of his refugee story.

[And ] a film that had begun as a genocide story about struggle and perseverance had morphed into another, perhaps more genuine post-conflict tale, of intergenerational strife and the likely impacts of post-traumatic stress.

As Boschler filmed, he went back consulted research on collective trauma, noticing factors, such as a quick rise to anger, at play throughout the filming that he hadn’t originally appreciated. In screening the film in areas with a large Cambodian diaspora population, Bochsler has been repeatedly approached by viewers saying aspects of the conflict mirrored their personal lives.

Surviving Bokator will show at the Cambodia International Film Festival in an open air screening at Koh Pich City Hall on Friday, March 9 at 6:30pm, and at the same time on Saturday, March 10 at Chaktomuk Theater.
http://www.phnompenhpost.com/post-life- ... ppy-ending

by CEOCambodiaNews
The Cambodia International Film Festival 2018 closes today.
Trailer for the film The Witch in case you missed it: