Why Some Cambodian Women Are Attracted to Older Foreign Men

Why Some Cambodian Women Are Attracted to Older Foreign Men

by General Mackevili
This was on the "Only in Cambodia" Facebook Page, along with this comment, which I have to say is reasonable, LoL: 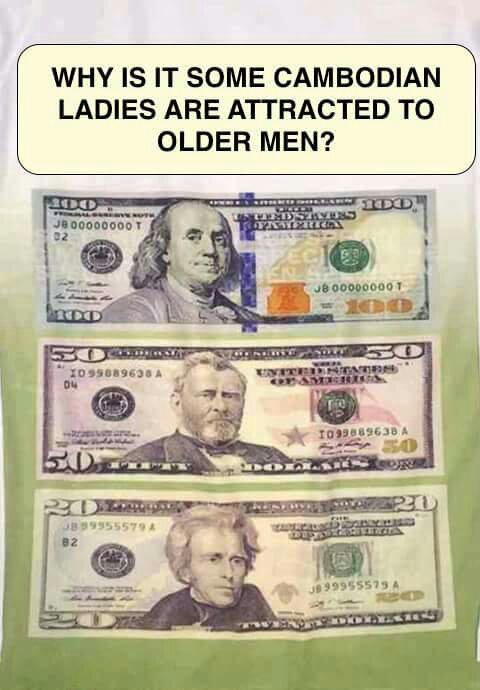 "Ah, the arrogance (and ignorance) of youth. Take your ease there a minute and let this 68 yr. old Paddy see if he can straighten out your heads a bit. Now, I could, justifiably, describe this post as ageist, imperialist, sexist and prejudiced but labels will serve no useful purpose. For a start, you're absolutely right that for some Cambodian women, it's an older man's money that is the primary attraction. But, were I a younger man, I wouldn't be feeling too smug, cos' guess what, there's absolutely no difference; young man or old, for some - in fact I'd say most - Cambodian women, money is the primary attraction. Does that devalue the relationship a barang has with a Khmer woman? Not in the slightest. Is that being disrespectful of Khmer women? Not at all and in fact, if we hadn't got our heads so far up our arses we'd see that it could not be otherwise. A quick perusal of Maslow's "Hierarchy of Needs" would serve well to illustrate my viewpoint but essentially it says we have different levels of needs; our primary need, not surprisingly, is survival. Coming from the affluent "West" our survival needs are mostly assured; few will die of starvation or exposure because the "state" has developed sufficient safety nets. Our relative luxury allows us elevate "romantic love" to the status of being the most desirable basis for a relationship ( tho if truth were told, romantic love - because it is so bloody whimsical - is probably the least suitable basis for a sustainable relationship ) and to consider a relationship based on anything other than romantic love as inferior. In our arrogance we tend to forget that in our own societies, up to maybe 3 generations back, the vast majority of relationships were economically based and to this day, on vast swathes of the planet, romantic love is not a consideration in forming relationships. Now, locate yourself in the reality of life for many Cambodians. If you're not sure where the family's next meal is coming from, are you, as a Cambodian woman, going to consider romantic love when you meet a barang? Are you going to consider age? Are you going to consider looks? Well are you? Money = Survival; its that simple. That said, if a barang makes and keeps a deal with a woman that ensures hers and her family's survival then she can move on to romantic love, she can move on to the intimacy we seek; getting there is down to our skills in courtship. I could go on to tackle the obviously prejudiced perspective on why older men hang out with younger women but I fear I might have already overtaxed your youthful attention capacity. Slainte.

by juansweetpotato
Good stuff, and he's right of course. Although, it could be that old barang dance sexier as was/is often proved on the dance floors of Martini's and Pontoon.

However true, I very much doubt if it will stop western women from lying to themselves and western men. Especially young ones. Disgust and Jealousy being the prime motivators behind such old/young criticisms.

by bolueeleh
another reason is that old man croak faster, leaving them with some valuables

by jaclu
I think it's actually not that different in the west. The main three criteria are still charm, wealth and power (regardless of sex and preferences) If you can compete in at least one field, your general desirability increases a lot. So to pretend that western girls as a group are immune to wealth / power is flawed.
The main difference would be that the level where a guy stands out on the wealth scale is lower, but the principle is the same. This is just about the general concept of desirability, on an individual level, there will of course be specific factors that influence choices.

by Anchor Moy
Very thoughtful OP. The only thing I disagree with is that this is a specifically OIC topic, or even that it is only women who are attracted by wealthier people of the opposite sex. Disadvantaged young guys will marry older women for the same reasons.

For a long time in the western world, romantic love relationships were frowned on as being impractical; marriage was a financial and social transaction. Things changed when women obtained legal rights over their property and started to earn their own money, and therefore became less dependent on marrying for money and status.
However, if you look at women with little education in lower socio-economic groups in western countries, I think that there are just as many who will marry well-off older men to improve their chances to have a better life. (Look at Donald Trump etc.)

IMO, there are a lot of people from all over will do what they can to make a better life, including getting married to someone who will help them improve their lot. It's not specific to Cambodia or Cambodian women.

Ok, now for some serious stuff JPS; i'm afraid those girls at Pontoon were lying to you about your sexy dancing. (And being "hansum"

juansweetpotato wrote:Good stuff, and he's right of course. Although, it could be that old barang dance sexier as was/is often proved on the dance floors of Martini's and Pontoon.


You can't trust anyone.

by TheGrinchSR
Marriage is a financial transaction in the West too. At 18... hot chicks are banging hot guys from the college rugby team or track team or whatever... by 30 - they've all married accountants and those hot dudes are out in the cold with the ugly chicks.

by vladimir
I think some of the criticisms of women on here stem from anger that they see through what men want, and decide that such stupidity demands suffering, LOL

How many of us put down 'pleasant personality' when seeking partners, as opposed to 'big knockers, long legs, and easy' ?

I remember my friend trying to set up an intro once, I was interested until she said the death words: ' she's got a nice personality'.

Now, if she had said" she's got a hot body and really cute face'...

by TheGrinchSR
I'm not criticizing. It's pretty sensible for security to be prioritized over "romantic love" and it's also fair to say that choosing security does not preclude romantic love either. Love comes over time; I know people in arranged marriages who are clearly in love, guys who married hookers who inhabit loving relationships, people who've married so far out of their visual league that you'd expect their partners to vomit when they see them but instead are over the moon with their choice, and so on... I suspect none of these relationships started with that burst of infatuation (at least one side of the relationship) that we refer to as "falling in love" but that didn't stop love from blossoming anyway.

The flip side of the coin is that this kind of arrangement means that men who demonstrate their value rather than those who rely on being born attractive get partners too. It's not unfair that a guy who can afford the biggest cave, the best schools, etc. gets a hottie... any more than it's unfair that a guy who walks through a room and makes women moist by just looking at him gets a hottie.

The only ones who complain about this are those that are neither hot nor able to compensate for it any other way.

by juansweetpotato
I notice that it's all men that have posted.I was brought up in the 70's and 80's, it's the hypocrisy that's found in my generation that I can't stand. Not sure about the new kids on the block, but hopefully they see things as they really are.Lol

I suspect the idea of romance is key. Here's the etymology;

c. 1300, "a story, written or recited, of the adventures of a knight, hero, etc.," often one designed principally for entertainment," from Old French romanz "verse narrative" (Modern French roman), originally an adverb, "in the vernacular language," from Vulgar Latin *romanice scribere "to write in a Romance language" (one developed from Latin instead of Frankish), from Latin Romanicus "of or in the Roman style," from Romanus "Roman" (see Roman).

The sense evolution is because medieval vernacular tales usually told chivalric adventures full of marvelous incidents and heroic deeds. In reference to literary works, often in Middle English meaning ones written in French but also applied to native compositions. Literary sense extended by 1660s to "a love story." Meaning "adventurous quality" first recorded 1801; that of "love affair" is from 1916. Romance novel attested from 1964. Compare Romance (adj.).

by vladimir
Interesting that romance had its origins in wealthy societies, knights etc.

Always regarded that whole chivalric culture as BS, somewhat akin to Khmer teenagers, you see someone and you instantly love them, even if you haven't met them an dthey are completely unaware of you, and you must do a bridge jump if they won't agree to marry you.
All times are UTC+07:00
Page 1 of 12
Powered by phpBB® Forum Software © phpBB Limited
https://www.phpbb.com/