Basically, a man claiming to be English chats up single (or not so single as well?) Cambodian women online for a while, tells them they're sending them a package from overseas containing a laptop and an iPhone, and all they need to do is pick it up at a courier in Phnom Penh.

When the woman calls the courier to find out where to pick it up, they're informed that they first need to pay a couple hundred dollars of customs/import fees and are given a Wing account to send it to.

It's a fake courier of course, and after they send the money it's assumed that they never hear from their "English boyfriend" again.

So everyone should make sure they tell their Cambodian girlfriends and wife to not have any English online boyfriends on the side, as they might get scammed.

Here is a report about this from the Cambodia Scammers Page: 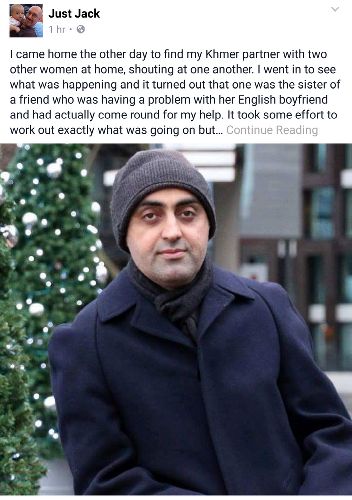 "I came home the other day to find my Khmer partner with two other women at home, shouting at one another. I went in to see what was happening and it turned out that one was the sister of a friend who was having a problem with her English boyfriend and had actually come round for my help. It took some effort to work out exactly what was going on but apparently he had sent her a parcel containing a laptop, an I-phone and a large sum of cash. It had been held up at customs and the courier company were demanding $300 to release the package. She asked me to speak with him since she didn't speak English (at all). I did and he was clearly not English himself, and we could scarcely understand one another. She showed me a pic of the delivery label and I googled the company so we could find out what was going on. It didn't exist, I couldn't find any details about it anywhere. Fast Courier Services, Cambodia. Also, their Email address was invalid and their business number was a Smart mobile. I spoke with her and found that she was actually only talking to him on Facebook for several months, never having met him. I checked his account, no friends and only a few pics of himself that I suspect were simply clipped from some other site. His name is Alex Nobel, sure enough, I searched his details on the UK databases and there's no such person in his age range in the place he was meant to live. The account was clearly fake. When the courier company called her, she told them she knew it was a scam and threatened to call the police and they rang off and her 'boyfriend' stopped speaking with her. The $300 was meant to be sent to Siem Reap via Wing. This is clearly not a sophisticated scam and targets women who are naive and well... not the kind of women we'd want to date but still. I imagine this is fairly widespread and there are other fake profiles out there. I include the pics from his account but I'm fairly certain they are not of him. If I'd have been around later when the company called back I would have got her to offer to send the $300 via Western Union so we had a name and address and target town to offer up to the authorities (Yeah... I know) or at least to share around the town. So, watch out for this. Cheers."
"Life is too important to take seriously."

That has been going on for quite a while.
Top

Re: RE: Re: "Courier" SCAM Targeting Single Cambodian Women in Phnom Penh

hanno wrote:That has been going on for quite a while.

Yeah, a nice and simple scam, which I'm sure has a plethora of versions to it.
"Life is too important to take seriously."