NO BUSINESS SALES HERE PLEASE, WE HAVE A SECTION FOR THAT IN THE CLASSIFIEDS.
Post Reply Previous topicNext topic
19 posts 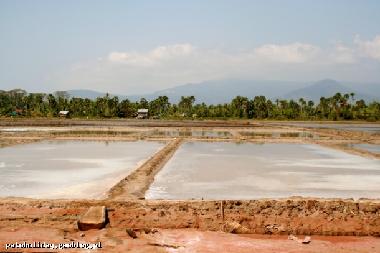 Photo: Trip Advisor
Salt Imports Spoil Market
Though the Kingdom’s existing salt farms in Kampot and Kep produce enough salt to support domestic consumption, industry experts, however, are worried that a flood of the vital commodity from neighboring countries will spoil the market for Cambodian producers.

Mr. Baraing said he was worried that locally produced salt will remain much in stock if the import of lower-priced salt is not stopped.

“We consume a maximum of about 100,000 tons of salt per year. However, if even 20,000 tons of cheaper salt is imported, it will affect our local production forcing us to keep the surplus salt in storage,” he pointed out.

Mr. Baraing said salt from Thailand and Vietnam was machine produced whereas the commodity from Cambodia was produced by hand, which, he added, was very labor intensive.

“This makes our salt more expensive. We cannot lower the price because of the higher production cost and also higher cost of packaging,” he said. “Although our salt quality is good, our salt’s color is not white compared to other salt produced by machine.”

The price of local salt is currently about $38 to $48 per ton, down from about $80 a ton in previous years.
http://www.khmertimeskh.com/news/27907/ ... il-market/
Cambodia Expats Online: Bringing you breaking news from Cambodia before you read it anywhere else!

hopefully the imports are iodised to relieve on of the most severely iodine deficient populations in the world.
the kampot producers were directed by HE to iodise several years ago with no result.
a tariff would very easily solve this problem if local product was iodised.

aside from salt as a commodity- kampot salt is artisanally produced, and could possibly compete teamed with pepper
Top

Yes, you're right FLB. That's very interesting. I didn't realise how serious the iodine deficiency problem still is in SEA, or that it was actually worsening in Cambodia.

This study says the level of iodine consumption in Cambodia has dropped alarmingly, and the importing of non-iodized salt from Vietnam may be partially responsible as more imported salt is being consumed. Cambodian salt is iodized, but is more expensive to produce and therefore to buy. Also, according to the 2016 report, the iodizing of Cambodian salt has become insufficient since the monitoring came under the control of government authorities, and deficiency levels are now close to those of 1997.

For those who don't know, among other things, iodine deficiency causes increased rates of cretinism, retarded mental and physical development, and a lower IQ in children. This is not good for the future development of Cambodia.


According to the 2014 data, the prevalence
of non-iodized salt (coarse and fine) varied
significantly between provinces (p<0.001)

Surprisingly, the proportion of
non-iodized salt on the market was high
also in the salt-producing provinces of Kep
and Kampot, which may be due to leakage
of non-iodized salt from production areas. The presence of non-iodized salt also
raises a question about the possible impact
of Vietnamese and Thai imported salt on
Cambodia. The price variance between
Cambodian domestic salt (US$65 per metric
ton) and Vietnamese salt (US$30–$40 per
metric ton) encourages the influx of non-
iodized salt across the border, aided by a
lack of border controls and import monito-
ring. Vietnam stopped iodizing salt after the
2005 revised decree on the production of
iodized salt failed to uphold the mandatory
iodization requirement In Vietnam

This is the latest report on iodine deficiency in Cambodia from May 2016: http://www.ign.org/newsletter/idd_may16_cambodia.pdf
Top

Kep salt workers.
The Ministry of Commerce plans to push Kep salt to obtain geographical indication (GI) status thanks to the natural quality of salt in the province.

Commerce Minister Pan Sorasak said the ministry was reviewing the possibility of GI status for salt farmed in Kep because the province is a limitless source of natural salt and seafood.

“If the plan for GI status for Kep salt is successful, the province will be more attractive to investors and tourists and will help create more job opportunities and income for the people,” he said.

“Salt is a partner of pepper. Our vision is to help Kep province with its GI products. We are studying Kep salt because many countries are interested in this product.

Bun Baraing, the co-executive director of the Salt Association of Kampot and Kep, said getting GI status would be good for salt exports, but for now, salt from the two provinces was just supplying the local market...
http://www.khmertimeskh.com/news/33807/ ... gi-status/
Cambodia Expats Online: Bringing you breaking news from Cambodia before you read it anywhere else!

Sorry about the problem but really stretching the point with this. Battle cry, "“Salt is a partner of pepper. " Do they really think tourists will come to Kep to buy salt to partner up with their pepper? Sea salt is preferable to types lacking iodine but other than that NaCl is just NaCl

IMO pepper from Kep while excellent is of no higher quality than pepper from Memot.
As my old Cajun bait seller used to say, "I opes you luck.
Top

I took Kampot pepper home and I have been cooking with it a lot. I can't taste any difference from the usual black pepper wherever that comes from.
Top

willyhilly wrote: ↑Tue May 29, 2018 3:28 pm I took Kampot pepper home and I have been cooking with it a lot. I can't taste any difference from the usual black pepper wherever that comes from.

its not the taste, its the smell, kampot pepper is more aromatic and not so prickly (cant think of a better word) to the nostrils
Money is not the problem, the problem is no money
Top

Iodised salt to boost children’s brain development
June 22, 2018
UNICEF nutrition experts and our partners have been closely monitoring the iodine situation in the country because of its direct link to child nutrition and have been supporting the government to find innovative solutions to remedy the issue. The government’s new commitment at policy level will provide more thorough oversight of the salt being manufactured and sold in Cambodia, which is an essential step in improving children’s health and food safety in the region.

One of the ways UNICEF is working to combat improper salt iodisation is with a simple machine called ‘The Nimble.’ This reliable, low-cost technology was developed specifically for small-to-medium sized salt producers in rural areas that may not have access to electricity. To date, several salt producers have remodeled their factories and invested in this technology to ensure that their products meet the government’s salt iodisation standards.

Proper salt iodisation practices are essential, merely using iodine is not enough. To ensure the highest quality product, the correct equipment is required. In the past, there have been cases where improper manufacturing practices led to salt being sold with excess iodine concentration – which could be toxic. The Nimble ensures that salt is iodised sufficiently, but also safely, without excess concentration.

Bun Narin, the owner of Thaung Enterprise and one of the salt manufacturers who has acquired The Nimble machine, was present to witness the launching of the new Prakas 85 at the event hosted by the Ministry of Industry and Handicraft.

Mr Narin described how he did not always produce salt using iodine, explaining that it wasn’t until UNICEF approached him that he understood the importance of adapting his manufacturing practices. Now, Mr Narin uses The Nimble to ensure that his salt meets the recommended iodisation standards and says that the machine is easy and efficient to use. He recognises its importance to his business because he wishes to bring the highest quality salt to the market.

Mr Narin is also aware of the vital public service he is contributing by following the government’s regulations: “By iodising my salt, I am helping the people of Cambodia, especially the younger generation.” Mr Narin plans to expand his business, and his daughter, Thyda, has recently opened her own iodised salt producing company and brand in 2016.
https://www.khmertimeskh.com/50503420/i ... velopment/
Cambodia Expats Online: Bringing you breaking news from Cambodia before you read it anywhere else!

“We are very proud to have entered this partnership with such a renowned European producer,” said Hay Ly Eang, Confirel’s chairman.

Both firms are now studying ways of improving the quality of local salt and training farmers so that the product can meet European Union quality standards, Mr Ly Eang said, adding that Confirel’s salt products will be exported to the EU market.

However, salt production this year has been hampered by heavy rains, he said.

Bun Baraing, executive director of the Salt Association of Kampot and Kep, told Khmer Times that unfavourable weather in the country’s south is inhibiting farmers from harvesting salt, adding that production this year will probably not be enough to meet domestic demand.

Mr Baraing estimates an extra 20,000 to 30,000 tonnes of salt will need to be imported to complement local production.
https://www.khmertimeskh.com/50531255/c ... roduction/
Cambodia Expats Online: Bringing you breaking news from Cambodia before you read it anywhere else!

According to the president of Kampot’s Salt Producer Community, Cambodia is exporting high quality salt to the French market for high prices, while buying in cheap salt from China for local markets at only about $ 90 per tonne plus shipping costs.

Labour shortages, as well as the weather have pushed Kampot salt prices up, meaning it is better economics to sell the product directly to France, rather than the domestic market, while the Chinese salt is much cheaper for local consumers.
Cambodia Expats Online: Bringing you breaking news from Cambodia before you read it anywhere else!