Winning the war on dengue
4 July 2017
The number of people suffering from dengue fever in Cambodia has dropped by half in one year, but people still need to be on their guard, the Health Ministry warned yesterday.

The ministry yesterday used National Dengue Campaign Day to announce that there were 1,133 reported dengue cases in the first 24 weeks of this year and just one fatality, compared with 2,447 dengue cases and five deaths in the same period last year.

Leang Rithea, national dengue control programme manager at the ministry’s National Centre for Parasitology, Entomology and Malaria Control, applauded the latest statistics.
“It means that the number of cases decreased more than 50 percent and deaths dropped more than 80 percent,” Dr Rithea said...
http://www.khmertimeskh.com/news/39932/ ... on-dengue/
Cambodia Expats Online: Bringing you breaking news from Cambodia before you read it anywhere else!

A bad start to 2018 with 3i6 cases of dengue recorded in the first three weeks. 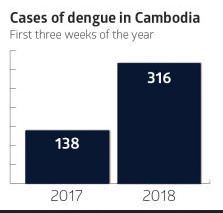 ‘Critical’ year for dengue, as cases jump by 130 percent and one death reported in Phnom Penh
5 February 2018
Dengue fever cases have spiked by more than 130 percent in the first three weeks of 2018 as Cambodia enters an “epidemic” year, the likes of which haven’t been seen since 2012, when the mosquito-borne virus infected nearly 40,000 and left some 160 people dead.

Dengue cases spike according to natural cycles, and health officials had predicted that another epidemic would strike the country in 2017 or this year, with this year’s number of cases already having already reached alarming rates, officials and experts said.

What’s more worrisome is that the rainy season – when virus transmission peaks – is still months away, they added.

During the first three weeks of January, there were 316 dengue cases – one of them fatal – compared to only 138 nonfatal cases in the same period last year, according to Dr Ly Sovann, spokesman for the Ministry of Health and director of the ministry’s Communicable Disease Control Department.

“We urge the public to take preventive measures and [to] go to [the] hospital for treatment,” Sovann said in a message.
http://www.phnompenhpost.com/national/c ... phnom-penh
Cambodia Expats Online: Bringing you breaking news from Cambodia before you read it anywhere else!