The suspects' names are Hok Dork, 44, Ki Chantha, 26, and Heang Poch, 27. They are all construction workers from Prey Veng province.

General Brigadier, Sor Bun, a general commander in chief of Bonteay Meanchey province told reports that the three suspects were arrested by Monkol Borey police when there was a complaint from a woman, Yee Leap, 35, a vendor who sells phones at Rersey Krok village, Rersey Krok commune, Mongkol Borey district, accusing Hok Dor and his gang members of buying a SIM card with a fake $20USD note and leaving immediately after getting money exchanged on February 19, 2016.

The gang visited her shop again on February 25, 2016. Hok Dor and his group members eventually visited this time to buy another SIM card. This is when she decided to file a complaint to Mongkol Borey district police to stop the three men. Five $20 notes were found and their Ford pickup truck, plate number 2H 0275 Phnom Penh, was also confiscated by police.

The 3 men are awaiting trial. 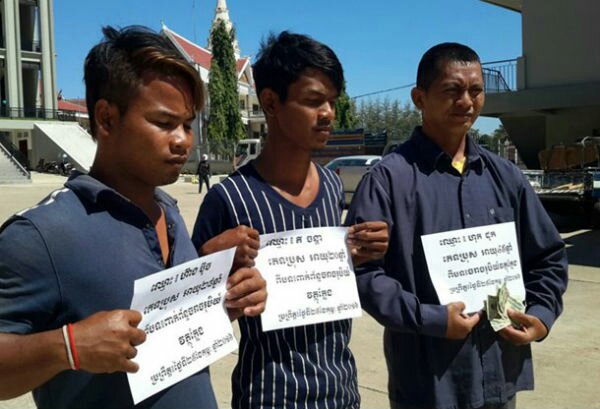