William Somerset Maugham – “Dying is a very dull and dreary affair. My advice to you is to have nothing whatever to do with it.”

Errol Flynn - “I’ve had a hell of a lot of fun and I’ve enjoyed every minute of it.”

Queen Elizabeth I - “All my possessions for a moment of time.”

John Quincy Adams – “This, is the last of earth. I am content.”

Buddha – “Work hard to gain your own salvation.”

Oscar Wilde – “Either that wallpaper goes or I do.”

Che Guevara - “I know you have come to kill me. Shoot, Coward. You are only going to kill a man.”

Thomas Edison - “It is very beautiful over there.”

Salvador Dali – “I do not believe in my death.”

Curt Cobain – “It’s better to burn out than to fade away.”

Adolph Hitler – “I myself and my wife – in order to escape the disgrace of deposition or capitulation – choose death. It is our wish to be burnt immediately on the spot where I have carried out the greatest part of my daily work in the course of a twelve years’ service to my people.”

Luciana Pavarotti – “I believe that a life lived for music is an existence spent wonderfully, and this is what I have dedicated my life to.”

James W. Rodgers – “Bring me a bullet-proof vest.” (Asked for a last request when facing a Utah firing squad in Utah.)

Leonardo Da Vinci – “I have offended God and mankind because my work did not reach the quality it should have.”

Alfred Hitchcock – “One never knows the ending. One has to die to know exactly what happens after death, although Catholics have their hopes.”

Sir Winston Churchill – “I’m bored with it all.”

Bing Crosby – “That was a great game of golf, fellers.”

Charles Darwin - “I am not the least afraid to die.”

Surgeon Joseph Henry Green – “Stopped.” (Checking his own pulse as he lay dying.

Thomas J. Grasso – “I did not get my Spaghetti-O’s. I got spaghetti. I want the press to know this.” (Convicted murderer using his last words to complain about his last meal.)

Amelia Earhart – “Please know that I am quite aware of the hazards. Women must try to do things as men have tried. When they fail, their failure must be but a challenge to others.” (Last radio communiqué before her disappearance.)

George Washington – “It is well, I die hard, but I am not afraid to go.”

Jesus Christ - “It is finished. Father, into your hands I commend my spirit.”

Robert Alton Harris (California Gas Chamber, 1922) – “You can be a king or a street sweeper, but everyone dances with the Grim Reaper.”

General John Sedgwick – “They couldn’t hit an elephant at this distance.”

Crowfoot (American Blackfoot Indian Orator) – “What is life? It is the flash of a firefly in the night. It is the breath of a buffalo in the winter. It is the little shadow which runs across the grass and loses itself in the sunset.”

These are some of the most interesting dying words I’ve found on the net. They’re in no particular order and I add to the list as new stuff shows up. If you have anything to suggest, ship me an email and I’ll post it.


LOL, [From profound to LMAO, my favorite was,]

“Bring me a bullet-proof vest.” (Asked for a last request when facing a Utah firing squad in Utah.)

HE Asquith...This is not the end of me.
Top 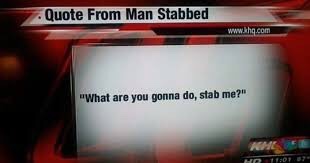