If you have something so weird, strange or off-topic to post and think it doesn't belong in any other forum; you're probably right. Please put all your gormless, half-baked, inane, glaikit ideas in here. This might also be a place where we throw threads that appear elsewhere that don't belong ANYWHERE end up, instead of having to flush them. FORUM RULES STILL APPLY.
Post Reply Previous topicNext topic
3 posts • Page 1 of 1

Lots of heavy stuff on the forum news at the moment. Let's lighten up ...

Here's one man's solution on how to deal with his personal problems. Much better idea than choppping people with an axe or burning down the house IMO. I give him 9/10 for dealing with his shit.

A food deliverer seen riding his motorcycle without clothes in Songkhla province reported himself to police on Monday (September 21).

On Monday, a video of a naked man riding a motorcycle with a food delivery bag behind was shared via social media. The incident took place on Kanchanavanich Road.

However, the video was later deleted.

Reporters visited the nearby areas where the naked man was seen. A local trader said that the sight of the man was unbearable, and she would not eat food delivered by him.

A taxi biker named Bai Aumaoom, aged 66, said that he saw the man park his motorcycle in front of Hua Pom Nok Temple. Then he took off his clothes and walked around, and later rode off on his motorbike.

The biker also mentioned that the naked man later returned to the temple, walked around, and finally wore his clothes before leaving.

On the same day, the suspect reported himself to local police. His name was Botsin Dueanchamroon, aged 24. He was fined by Bt500 for being naked in public.

The man claimed that he decided to be naked that morning due to his personal problem.

I only want a better life
in a safe country
where the streets are paved with...
Not gold???
OK, naked bodies are even better.. 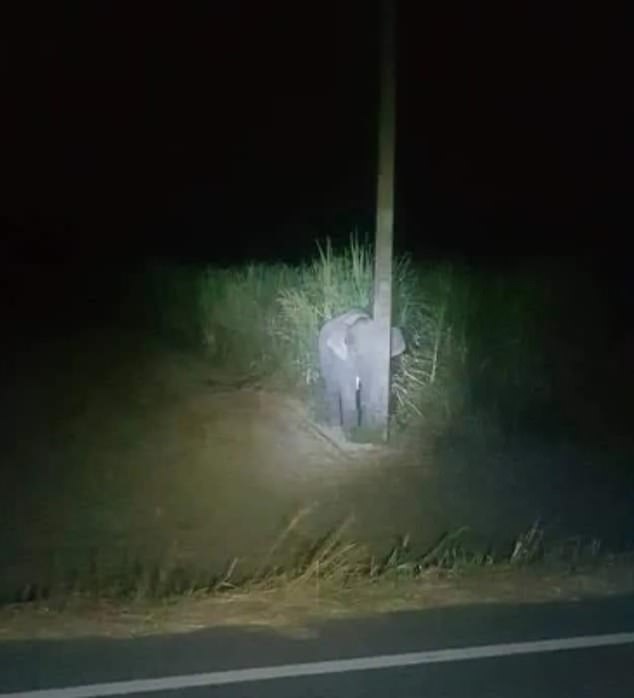 A baby elephant who was chased out of some sugar cane fields in Thailand took refuge hiding behind a power pole, standing completely immobile while searchers shone torches at it.
Cambodia Expats Online: Bringing you breaking news from Cambodia before you read it anywhere else!