Breaking news from Cambodia can be found here. CEO often finds Khmer news and translates it into English for our readers if it is interesting to expats, locals, Cambodians living abroad and anyone who wants to stay informed of the latest local and international news stories about Cambodia and our neighbors in South East Asia. There are many sources for Khmer news articles and they can all be found here in one place. Most of the media comes out of Phnom Penh, Siem Reap or Sihanoukville, but we cover national Cambodian news from all provinces.
Post Reply Previous topicNext topic
77 posts

all the illegals have a chance to be legal now 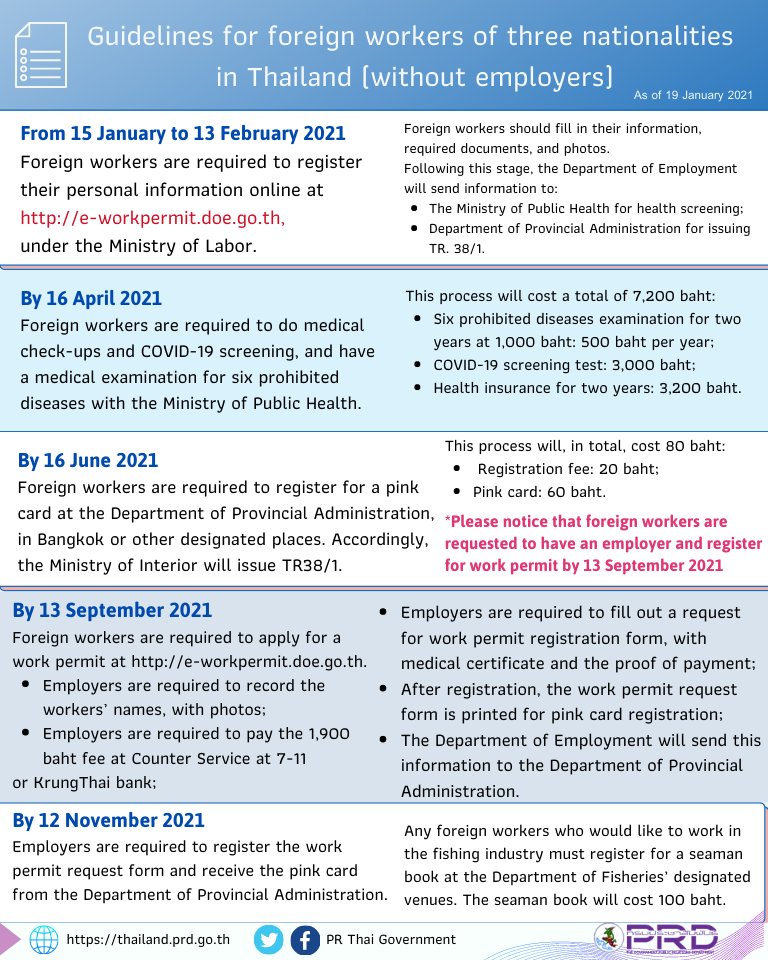 
Labour Minister Suchart Chomklin expects about 500,000 illegal migrant workers will be registered by the middle of next month.

The minister said on Tuesday that registration started on Jan 15, and since then 190,000 illegal migrants had applied.

The special registration period for illegal Cambodian, Lao and Myanmar migrants is set to continue until Feb 13. The minister expected about 500,000 of them would grasp the opportunity to become legitimate.

https://www.bangkokpost.com/thailand/general/2057483
In a nation run by swine, all pigs are upward-mobile and the rest of us are fucked until we can put our acts together: not necessarily to win, but mainly to keep from losing completely. HST
Top

i wonder what happened>>>
In a nation run by swine, all pigs are upward-mobile and the rest of us are fucked until we can put our acts together: not necessarily to win, but mainly to keep from losing completely. HST
Top

Kamrieng (BATTAMBANG): They come in groups of between five and 10 and at teams a family of three or even just one.

They walk through the night at times for hours, stumbling and getting bruised in the process, all the time fearful of stepping of landmines, bandits and wild animals to reach a four meter wide and one meter deep stream between the Chan Kiri corridor and Dung Border, Kamrieng district, Battambang province.

Their objective – to cross the stream into Cambodian territory and safety from what they feel is a hopeless and dangerous situation in Thailand, caused by unemployment, job losses and a spiraling COVID-19 pandemic in Thailand.

Many of them cross the illegal check points without valid documents and prior to the exodus, would have been detained and deported by Thai authorities prior to the spike in the pandemic in Mid December.

However, now, they are encouraged by the same Thai security forces when they stumble upon them, who also offer them directions, drinking water and some food.

Several migrant workers who arrived at the Kamrieng and the Sompov Loun quarantine centres said that though they face an uncertain future in Cambodia, the risk of crossing back was worth it as the situation in Thailand had become volatile as Thais had blamed other migrant workers, especially from Myanmar for the sudden surge of COVID-19 there.

“We didn’t want to be caught in the rising sentiments of hatred and anger which put not only us, but all other migrant workers at risk of violence in Thailand,” a group of migrant workers who crossed the border on Sunday morning said, while awaiting their essentials kit and swab tests for the deadly virus.
https://www.khmertimeskh.com/50809402/a ... om-safety/
Cambodia Expats Online: Bringing you breaking news from Cambodia before you read it anywhere else! 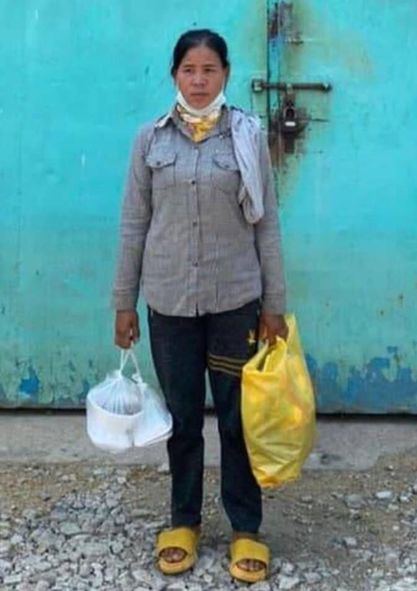 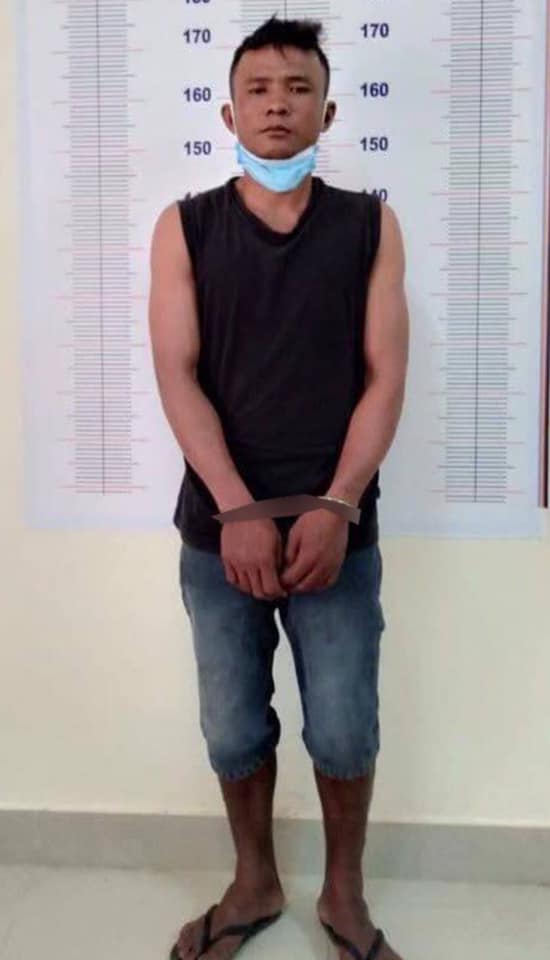 Police nab 80 migrant traffickers
Lay Samean | Publication date 23 February 2021 | 22:15 ICT
Police around the country have arrested 80 brokers accused of having arranged illegal transport across national borders for migrant workers as authorities attempt to carry out strict quarantine measures and crack down on traffickers pursuant to orders from the prime minister.

National Police spokesman Chhay Kim Khoeun told The Post on February 23 that the suspects would be quarantined in accordance with health procedures before prosecutions would proceed against them and the migrants who had sought to evade protocols.

Prime Minister HE on February 20 ordered border police to scrutinise people’s travels to clamp down on illegal cross-border traffic. He also appealed to Cambodian migrant workers in Thailand not to return home during the spread of Covid-19, even for the Khmer New Year.

While the Kingdom would always welcome its nationals home, they would be subject to two weeks of quarantine upon entering the country – and further measures if they sought to return to Thailand for work, HE explained, saying it was not worthwhile to try to return for just the holiday.

“We cannot refuse to receive our citizens who come back home, but we must keep them in quarantine. We also cannot allow them to cross surreptitiously from Cambodia into Thailand, Vietnam or Laos. All border police must stop migrants from doing so,” he said.
https://www.phnompenhpost.com/national/ ... raffickers
Cambodia Expats Online: Bringing you breaking news from Cambodia before you read it anywhere else!

Note ; "Due to limited finances, returning migrants at Ou Beichoan are not administered proper Covid-19 tests"

Crossborder migration has long been a part of life in the rural Cambodian borderlands, where paid work can be scarce. But the well-trodden routes of the past have been redrawn during the pandemic. With the previous thoroughfare of Poipet officially closed to migrants, and confronted by alarmist rumours of intensifying crackdowns by Thai authorities, many returnees are relying on the help of paid brokers to get back home.

In an unfamiliar landscape, these brokers are hired to help migrants circumvent Thai authorities and locate the new and obscure POE in the remote border town of Ou Beichoan. While widespread anecdotal accounts from migrants support the prevalence of broker solicitation, the firm details of these transactions and the journeys they entail remain unconfirmed, said Dum Chanthida, the national project officer at IOM Cambodia.

Despite its military jurisdiction, which might suggest a certain level of security, prior to the pandemic, Ou Beichoan had been left relatively unmanned, garnering a reputation as a deregulated border point. Those looking to cross into or out of Cambodia without proper documentation could do so with relative ease, especially with the help of a broker.

According to unpublished data collected by the IOM in January, since the pandemic began, 150-200 migrants pass through Ou Beichoan on an average day – making it one of the busiest POEs in Cambodia, along with Osmach in neighbouring Oddar Meanchey.

With little known about Ou Beichoan, those who make it to the inconspicuous crossing often do so under the advice of relatives who have come through before, or more commonly the guidance of paid brokers, familiar with the POE as a former smuggling route.

When the migrants first enter Cambodia and arrive at the Covid-19 screening checkpoint in Ou Beichoan, they are told to leave their belongings in a designated area and take a seat under a nearby tarp. After taking a seat, they are divided into groups based on their province to ensure that they are sent to quarantine centres near their communities.

Once sectioned off, a group will be ushered into the second tent for their Covid-19 screening. Due to limited finances, returning migrants at Ou Beichoan are not administered proper Covid-19 tests. Instead, they’re called up in groups of four for temperature checks.

https://southeastasiaglobe.com/cambodia ... 44700f68e1
In a nation run by swine, all pigs are upward-mobile and the rest of us are fucked until we can put our acts together: not necessarily to win, but mainly to keep from losing completely. HST
Top

another good report on the migrant situation

PHNOM PENH (Thomson Reuters Foundation) - For the past two weeks, Cambodian migrant Mony Sunret has been hanging around an electrical workshop in the Thai province of Rayong, hoping to pick up odd jobs and save enough money to make a covert exit from Thailand.

Sunret, who recently returned to Thailand after leaving due to coronavirus restrictions last March, decided to flee once again when he found out his work permit was fake - putting him at risk from a government crackdown on undocumented workers.

“It’s like the old Khmer proverb: turn left, face a tiger; turn right, face a crocodile,” Sunret, 49, said of his year-long back and forth across the border.

“There isn’t much for me in Cambodia: just 14 days free food and shelter, in quarantine. But I must go: it’s not safe for me here anymore.”

More than 150,000 have returned home by official means since borders were shut in March 2020, but finding scant work opportunities, increasing numbers are risking arrest to sneak back into Thailand, campaigners said.

Like Sunret, others are trying to slip out of Thailand due to fears over the government crackdown, continued fallout from the pandemic on their jobs or simply tired of the discrimination they often face.

https://www.reuters.com/article/us-camb ... SKBN2AQ03B
In a nation run by swine, all pigs are upward-mobile and the rest of us are fucked until we can put our acts together: not necessarily to win, but mainly to keep from losing completely. HST
Top 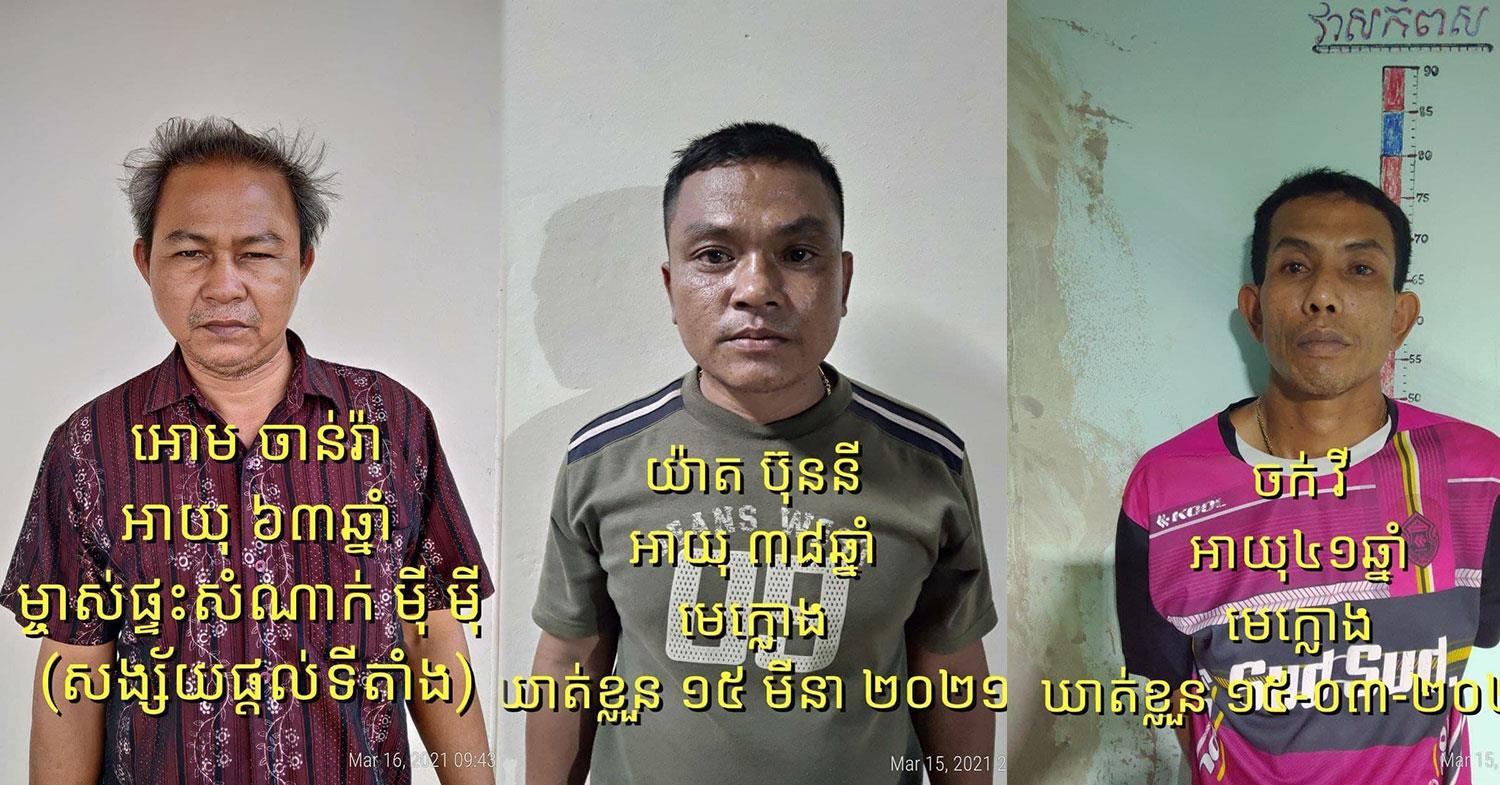 Cambodia News,(Banteay Meanchey): On the night of March 15, 2021, police in Banteay Meanchey province cracked down on illegal immigration into Thailand from Malai district by arresting two brokers who were smuggling 14 workers across the border into Thailand.

The two brokers hid 14 male and female workers in Mimi Guesthouse in Doung Village, Malai Commune, Malai District, Banteay Meanchey Province, in preparation for crossing the border illegally to Thailand on the night of the 15th. Om Chanra, a 63-year-old man who owns Mimi Guesthouse, who was part of the people smuggling operation, did not cooperate with the authorities, and he was also arrested.

The two brokers and the owner of the guesthouse are being questioned at the district police inspectorate to prepare a case to be sent to the Banteay Meanchey Provincial Police for legal action. The 14 workers are being interrogated at the inspectorate.
Cambodia Expats Online: Bringing you breaking news from Cambodia before you read it anywhere else! 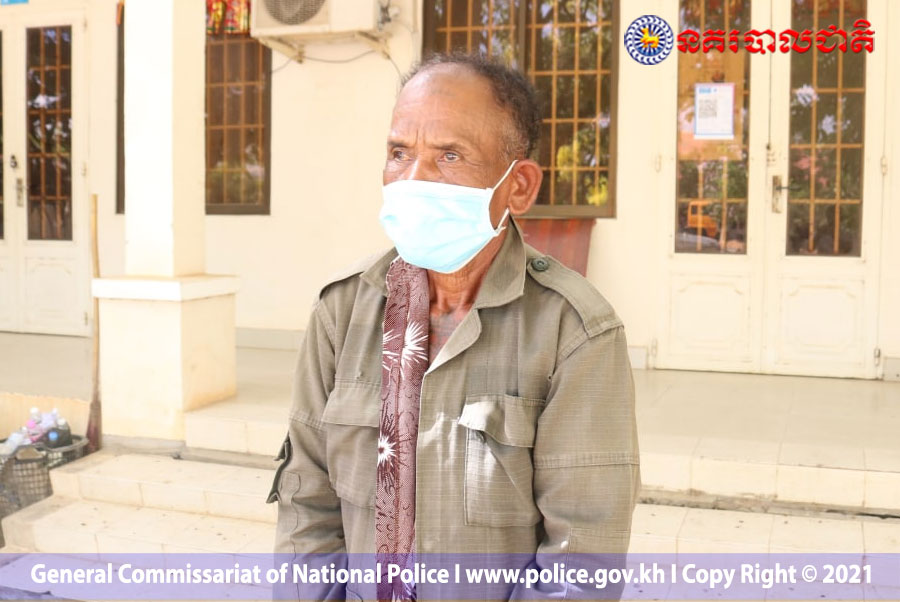 The border police arrested the suspect with two people, named Tor Soriya, a 39-year-old woman, and a Math Beum, a 20-year-old man, that the suspect was smuggling across the border to Thailand, in Thmor Pok district.

After receiving the command of general lieutenant Seth Los, the police chief, and the coordination from the prosecutor in Meas Chanpiseth, the suspected people smuggler was sent to Thmor Pok police station at 11:20 am, on April 20, 2021. Then, he was sent to Banteay Meanchey police station to be charged. 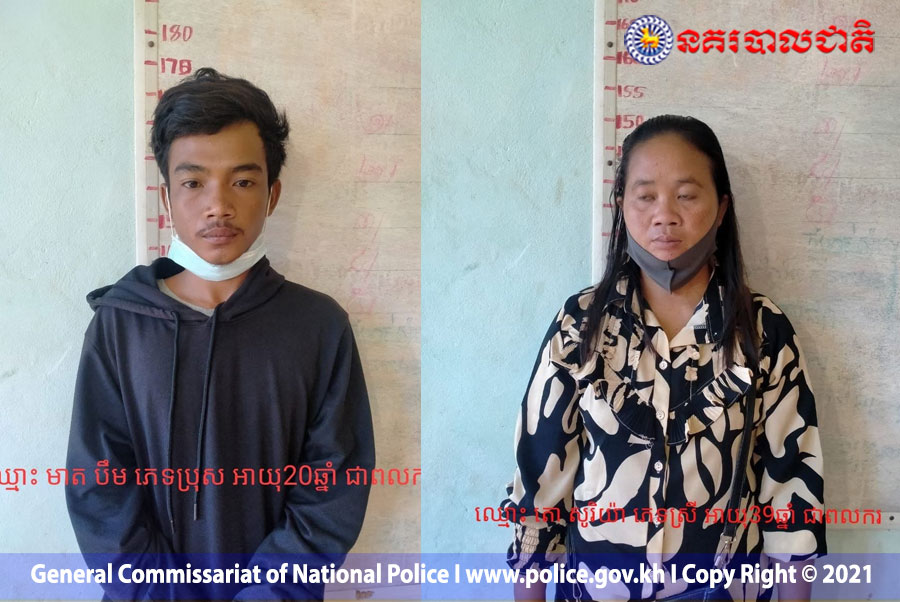 His two customers were taken to get quarantined for 14 days.
Cambodia Expats Online: Bringing you breaking news from Cambodia before you read it anywhere else!