I only need one glove and one shoe but its not worth the risk.

Totally agree. I guess I'd rather lose one lung than lose an arm and a leg.
Top

UPDATE: News from the hospital is encouraging. The patient is being treated successfully, but more treatment is necessary. 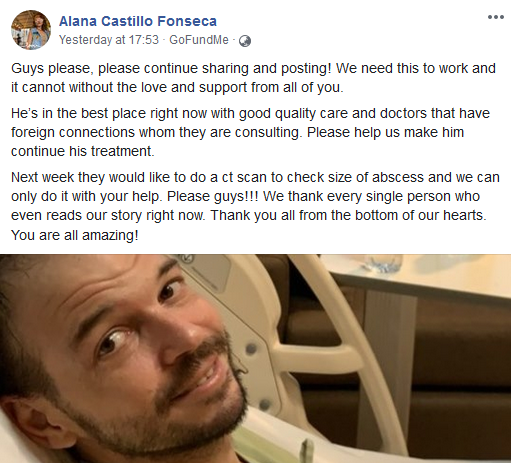 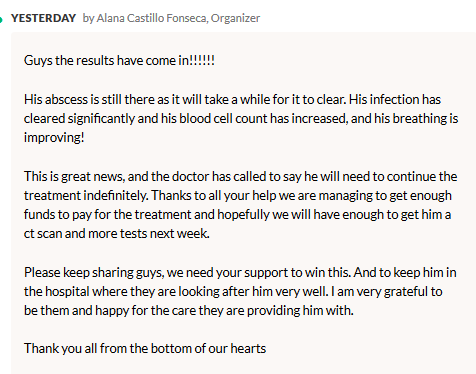 https://www.gofundme.com/f/my-partner-i ... supporters
Cambodia Expats Online: Bringing you breaking news from Cambodia before you read it anywhere else!

Sick Brit trapped in Cambodian hospital told ‘pay up £20k or we take out your lung’
Anthony Igoe, 31, had been working as a teacher out in Cambodia when he fell ill with a lung infection - now he can’t afford his medical bills and docs want to take drastic action
ByMatt Clemenson
Vivienne Aitken
08:23, 22 MAY 2020Updated08:38, 22 MAY 2020

A sick Scot stuck in a Cambodian hospital bed has been told he will lose a lung unless he can come up with the cash to pay for private treatment.

Teacher Anthony Igoe, 31, was working in the Asian country when he fell so ill with a serious lung infection he required hospital treatment.

But with his insurance firm refusing to pay out, medics in the poverty-stricken country have now told him he will have to pay the £20,000 for antibiotic drugs himself – or doctors will simply remove the infected lung.

And that has left his family back here in the UK desperately scrambling to come up with the cash.

Dad Jerry, 66, from Clydebank in West Dunbartonshire, told the Daily Record : “My guts are in knots. I wake up in the middle of the night and it feels as if I have been eating a ton of ice.

“I have no real words to say how it feels to have a son in hospital and be unable to get to him. His sister Andrea is in Australia and she is doing what she can from there to help too.”

And girlfriend Alana Fonseca, 28, who has been by Anthony’s bedside since he took ill, added: “If I could, I would have brought him home to Scotland but he is not allowed to fly.

“We have literally been told the doctors at the public hospital will have to remove Anthony’s lung because the drugs he needs are too expensive if we can’t pay for them.”

His insurance firm, Cigna, is refusing to pay for his treatment because it says he was already suffering from the lung condition when he took out a policy in February.

The first indication Anthony was ill was in January when he started coughing and getting chest pains. He was given antibiotics by doctors in Cambodia.

In March, Anthony began to feel poorly again – and his health has gone downhill due to the lung ­infection.

Alana said: “He was warm to the touch and one day in school he lay down on the floor and said, ‘I can’t do this.’ It was the first indication he was so sick.

“He just got worse and his fever wasn’t going away. The last week in April he was really bad. He had lost 20 kilos in a month.”

Alana took him to hospital where he was taken to intensive care.

She said: “This is when we realised things were really bad. I feel so guilty I didn’t get him to hospital before.”

After tests, it was found he’d picked up two bacterial infections.

One has led to an abscess in his lung – causing permanent damage – while the other led to pneumonia.

Alana added: “He needs to be in hospital for at least another week on very strong intravenous ­antibiotics and then he will need between eight months of strong oral antibiotics as well as X-rays.
https://www.dailystar.co.uk/news/latest ... l-22068007
Cambodia Expats Online: Bringing you breaking news from Cambodia before you read it anywhere else!

It sounds like a potential scam, but the guy also appears to be seriously ill.

I find it strange no hospital named in these stories, no Facebook presence on local groups etc.

And the comically presented "bill" they showed on first appealing.

So, if they aren't scamming for personal gain they are being scammed by an unscrupulous clinic , I say.
Top

Wonder what hospital they're in. Seems more expensive than the Bumrungrad....

"Anthony Igoe, 31, was taken to hospital in Cambodia, where he is a teacher with a serious Infection in his lungs. But medics in the poverty-stricken country have now told him he will have to pay £20,000 for antibiotic drugs or doctors will simply remove the infected lung,” the website wrote.

http://m.en.freshnewsasia.com/index.php ... 57-41.html
Conscience can be a terrible thing. So I hear. Not if you're something like me, of course. I don't give a fuck. Iain M Banks
Top

22 May 2020 by Alana Castillo Fonseca, Organizer
Hello everyone!!

Today we have started receiving more and more help from Scotland amongst other countries! We would just like to thank everyone for the amazing support.

We would also like to stress how amazing the Cambodian people have been, not only in hospital but at work and in daily life. The school we work in are constantly checking on us, our landlord has been magnificent and our doctors and nurses have been nothing but helpful and kind. This is a country who knows pain, and filled with hard working people. And we are grateful for everything everyone is doing for us!

22 May 2020 by Alana Castillo Fonseca, Organizer
Guys we have reached half way of our GoFundMe!!!!! This is incredible and astonishing, thank you all so much for helping us get here!!!

Yesterday we were told that the plan is to give him intravenous antibiotics for another week, then 3 days observation on oral antibiotics. This is if he continues to show signs of healing.

If he shows progress the love of my life will finally be able to continue his treatment and rehabilitation at home. It’s been a hell of 3 weeks to say the very least.

All we want is for him to come home now and start getting back some level of normalcy. It would not have been possible without your help and cooperation. He would have not been able to get treatment and we would have been in a very messy situation.

He has never had to be hospitalized before. So this has been incredibly traumatic for both of us. The love and support you showed us, snapped us out of our darkness and gave us hope. Please continue to share the story. Together we can and will beat this!
Cambodia Expats Online: Bringing you breaking news from Cambodia before you read it anywhere else!

Looking up Facebook, he has no close family or friends from Scotland expressing concern.

Same looking through the fundme page.

Except one double barreled name pops up in both: Louise Scerri Montaldo. Which is a weird name. Almost as weird as
Anthony Ruaridh Massena Igoe.

Also, under the news article in the echo. Not a single fam member or friend had commented or shared. All seemed to be by readers.