Yeah, that place out 'there'. Anything not really Cambodia related should go here.
Post Reply Previous topicNext topic
1566 posts

Summer Festivals Get the Go-Ahead in the UK
Latitude festival-goers 'can jump, dance and hug in safety'
Published 2 hours ago

The organiser of the Latitude Festival has said Covid testing meant those attending this month's event could "jump, dance and hug" in safety.

Anyone attending the festival must show proof of a negative lateral flow test or double vaccination.

The event in Suffolk starts three days after the government expects to lift all limits on social contact.
The 40,000-capacity event at Henham Park is part of the government's events research programme (ERP).

"It will be quite an emotional moment for me and I think it will be emotional for the music industry at large as it really will be the first event that opens properly as a camping event anywhere in the world," said Mr Benn, managing director of the Festival Republic Group.

He said a number of ministers and MPs would be at the the four-day event, which begins on 22 July.

Musical headliners will include Wolf Alice and the Chemical Brothers.

Many of the music festivals have already cancelled this year's events. Regards to the people's and organisers, opinions expressed, such has being vaccinated with proof of two shots to be allowed entry. Also it's so much safer outside. Many people have already forgotten the outdoor religious festival in India.
Always "hope" but never "expect".
Top

Labour scrape through in Bately by a couple of hundred votes. It was a nasty election with a small minority of islamists causing problems, going on about gays and jews. We can expect more of them in the coming years. Eventually an Islamist will be voted in, dark days ahead I fear.

tightenupvolume1 wrote: ↑Fri Jul 02, 2021 12:25 pm Labour scrape through in Bately by a couple of hundred votes. It was a nasty election with a small minority of islamists causing problems, going on about gays and jews. We can expect more of them in the coming years. Eventually an Islamist will be voted in, dark days ahead I fear.

A very good reason to avoid proportional representation. That opens the door to every religious fuckwit to garner enough votes to enter parliament. You'll have the UK Islamic party contesting the inner city seats and taking probably 50 of them. Look at Newham, or Tower Hamlets: White Face = Fuck Off.

Look at the Israeli Knesset, they have a Party List system, and it creates a hotchpotch of mainstream and religious zealots leading to coalitions where tiny minorities wield power way beyond their mandate. The tail wags the dog.

Anyway, Labour managed to impose a lesbian women with no qualifications for public office or even an interest in political activity on the fine people of Bately and Spen. Her ONLY qualification seems to be being the sister of the former MP Jo Cox who was murdered. George Galloway doing his best to destroy labour and get Kier Starmer out.

Labour deserved to lose choosing such a dud candidate. A teacher of physical health with a degree in "health-related exercise and fitness from Leeds Beckett University in 2005". (Trumped-up poly' flogging worthless pieces of A4 paper for £30,000). She only joined the labour party a few weeks before her selection. How depressing for all the genuine local Labour party activists who have given their lives to the cause and have been insulted by such a phoney being parachuted into one of the most desirable formerly safe Labour seats.

No wonder George Galloway came so very close to pissing on their parade.

On 23 May 2021, Leadbeater was selected as the Labour Party candidate for the Batley and Spen by-election. Her older sister, Jo Cox, had served as the constituency's MP from May 2015 until her murder in June 2016.[6][7] Upon her selection, Leadbeater declared that she was "the candidate the Tories fear". Her selection proved controversial as Leadbeater had been selected despite only joining the party in recent weeks. The rule requiring that candidates should be a member of the party for a year before being nominated was waived.[8][7] She was elected as a Member of Parliament (MP) for Batley and Spen on 1 July 2021, with a 323 vote majority.

Have a look at all the runners and riders in this donkey derby. The stand out for me is that Howling Laud Hope of the monster raving loony party got more votes than the Rejoin the EU Party! Another is that the country has no opposition to the Conservative or Labour tribal votes. 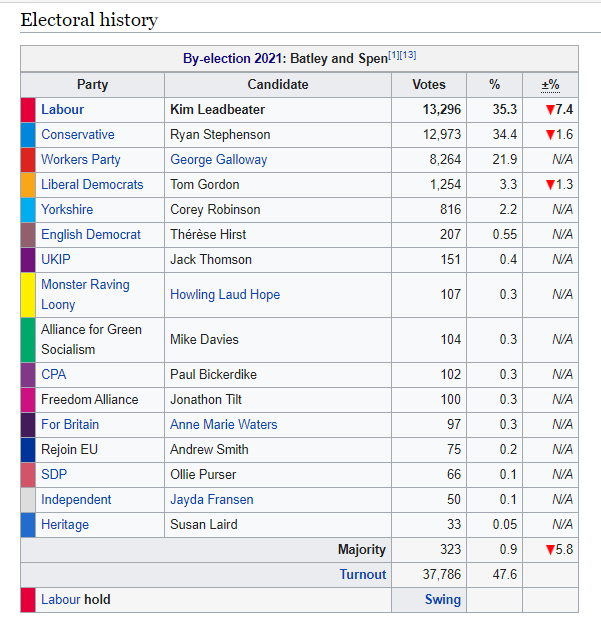 tightenupvolume1 wrote: ↑Fri Jul 02, 2021 12:25 pm Labour scrape through in Bately by a couple of hundred votes. It was a nasty election with a small minority of islamists causing problems, going on about gays and jews. We can expect more of them in the coming years. Eventually an Islamist will be voted in, dark days ahead I fear.

The land of Yorkshires old mill towns, with the small town of Batley just a stones throw down the hill from the place where I was born and raised. Batley Park with its ornate pond, Museum and butterfly garden was always on the "somewhere to go", down the steep hills being just nippers, the return journey was that of a harder task, now we knew the name, and why, of our so called pushbikes.
It was some years later we would see the new buildings of many more Mosques, with the offering of religious studies and teachings for the migrant workers that had been in need to fill the vacances, the plentiful jobs in the textile mills of the immediate area, and that of the many more mills in the areas around Yorkshire and Lancashire. The people whom would fill the jobs were here long before I arrived on the scene, some of their children would become our friends too over time.
The mills came too their end, the days had passed basically a turn of full circle for that of the first original workers, now the textile work of such materials, cotton and wool, would now be woven in that of the countries where they first came from.
The communities and families had grown over the time in the old mill towns, and that of the votes for the Labour party was always strong in those areas and beyond with the employment, mostly of manual work. But just has the mills had ceased to operate in their capacity of textile producers, they would stand empty and mostly forgotten, some even went into decay, others would become shopping outlets, commercial office buildings, and even new trendy apartments, how things can change in a short time, just how the political votes will go along with the changes of people and that of what is today.
One thing is for sure, and there will not be any big changes in the area of plentiful restaurants, food dishes of numerus types of curries that the first immigrant workers bought along with their own culture, recipes from the far away lands of India and Pakistan. Something I have enjoyed over many years living in the area that what was once that of my home.
Always "hope" but never "expect".
Top

This clown should be arrested and sent for trial. 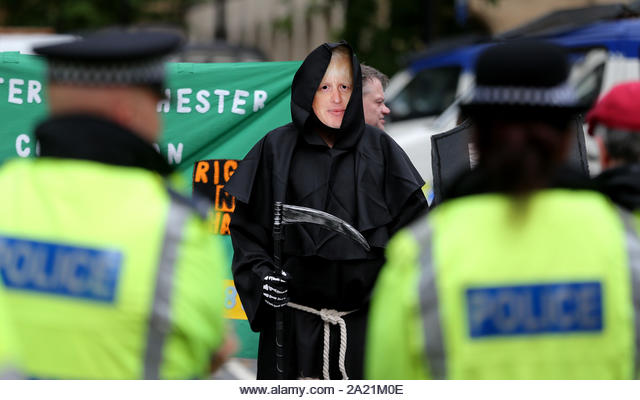 Can you paste the full article please?

It's been clear for sometime now that our government is out of its depth and doesn't have a clue. All the hard work and sacrifices we make are pissed all over by poor decisions time and time again.

I just hope what we fear doesn't happen. It's now a lot more likely that a new variant will emerged and if it does it will have a lot of experience with various vaccines.
Top

England’s health secretary, Sajid Javid, has tested positive for coronavirus and has mild symptoms, he has said.

In a video posted on Twitter on Saturday, Javid wrote: “This morning I tested positive for Covid. I’m waiting for my PCR result, but thankfully I have had my jabs and symptoms are mild.”

Javid got the positive result from a lateral flow test he took after feeling “a bit groggy” on Friday night. He said he was self-isolating at home with his family.
https://www.theguardian.com/politics/20 ... -for-covid
Cambodia Expats Online: Bringing you breaking news from Cambodia before you read it anywhere else!

At 50,000 cases a day and rising fast, are we going back to March 2020 when two thirds of the Government are isolating because Whitehall became a plague pit?

The failure to put India on the Red List in March, and then to completely ban all travel from India and Pakistan, is now becoming a national catastrophe, as predicted by yours truly. How come the public are not seeking Johnson's head on a spike? It was his fault. His colleagues know it too.
Top 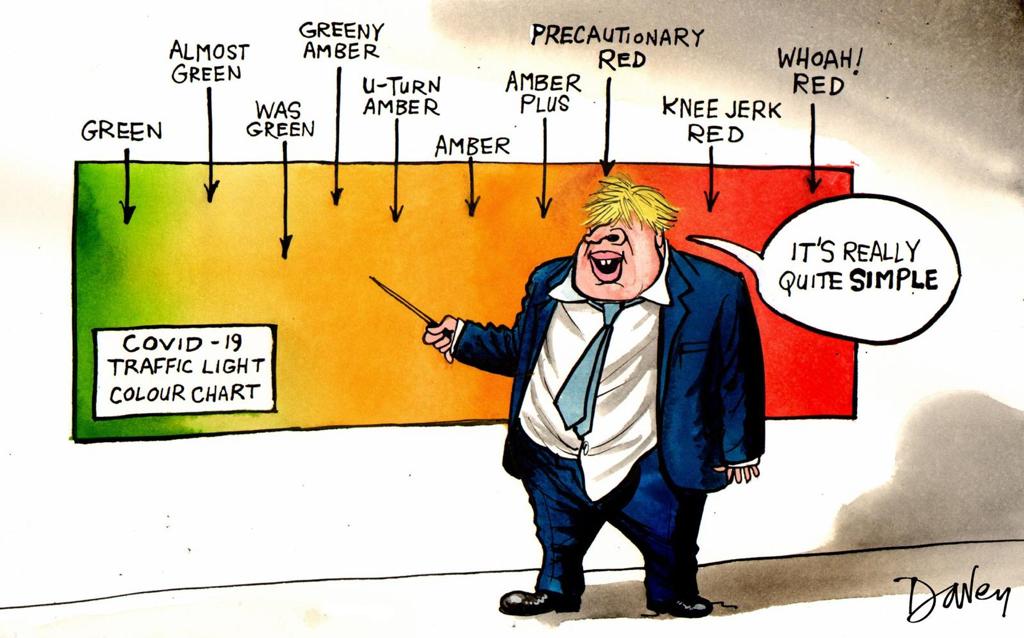