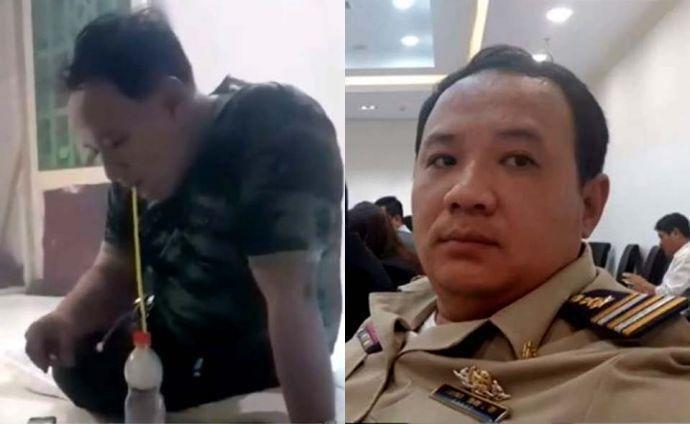 Cambodia News (Phnom Penh): On January 06, 2020, in the evening, Mr. Kuch Kimlong, the spokesman of Phnom Penh court, reported that the prosecutor Mr. Riel Sophen, decided to charge a 37-year-old man, Pen Rotanak, a police officer of the anti-drug department, for theft and the unauthorized use of weapons.

Mr. Kuch Kimlong said the case of the suspect was handed over to the judge for questioning. The suspect was arrested according to the complaint of a 36-year-old man, Ouk Rethy.

Mr Rethy said that on December 17, 2019, the suspect arrived at his house in a car, with two other men on a motorbike. Suddenly, the suspect took a pistol to hold up the victim and he told his team to take his money. The men took 3,200 USD and 280,000 riels and a phone.

After that, the victim went and filed a complaint at Somrong Krom police station. The suspect was arrested immediately after a video that showed him using drugs (methamphetamine) was posted on social media.
Cambodia Expats Online: Bringing you breaking news from Cambodia before you read it anywhere else!

That is of a rare level of stupidity, from a cop who could have the good life just by acting as a local cop.

Congrats on the new life with more cell friends, less drugs but overpriced.