This is a part of our Cambodia forums to chat about anything Cambodia-related. This discussion forum is at the top of our site because it's usually the busiest part of the expat community chatter with random topics on just about everything, including expat life, Khmer politics, Cambodian blogs we have or have come across, or whatever else our members want to discuss. Whether you're an expatriate, tourist, Cambodian or random traveler just passing through South East Asia, you are welcome to talk about anything or start new topics yourselves.
Post Reply Previous topicNext topic
78 posts

Noticed this one today in the news - Brick lane London - 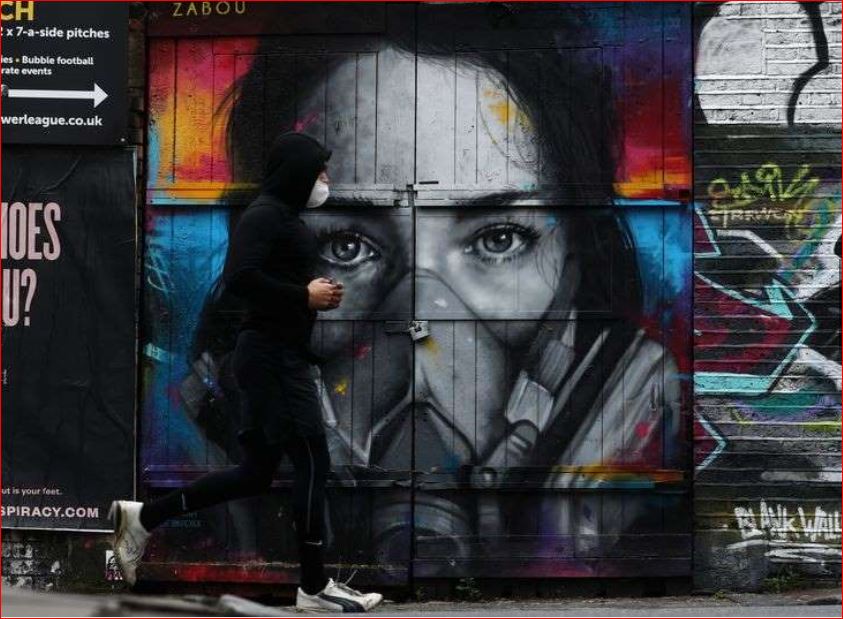 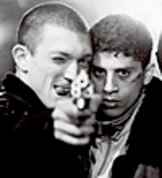 I say, not Dreph
Sure a few of D's black and white works are nearly as photo-realistic
but this face looks too white to me, i don't think he does caucasian.
And the background/highlighting is not the same style.

- that's my call, after just a quick scroll thru google images
??
Top

Dreph paints amazingly but, has SternAAlbifrons quotes - Sure a few of D's black and white works are nearly as photo-realistic but this face looks too white to me, the background/highlighting is not the same style.
SternAAlbifrons as a keen eye. 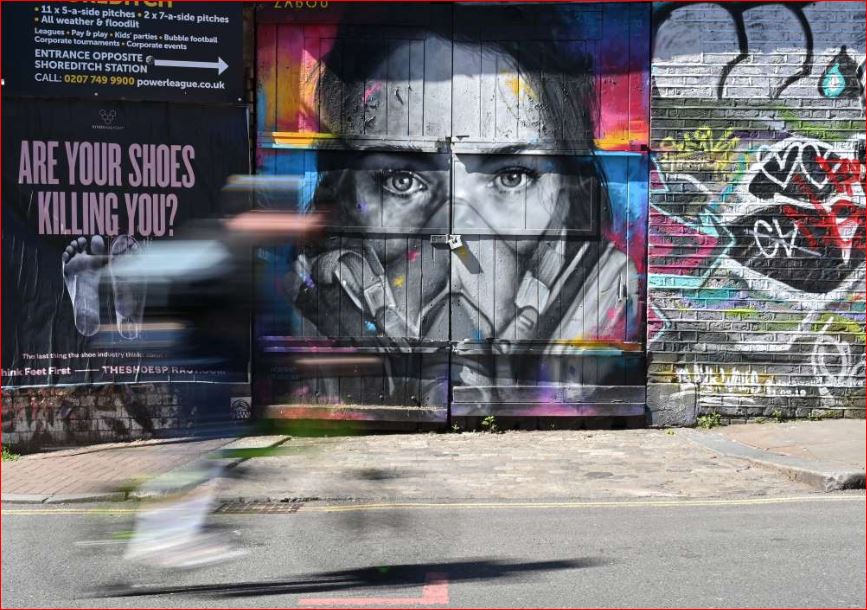 Zabou is a French street artist living in London known for her large-scale realistic portraits. Her artistic adventure began in 2012 when she moved to London to pursue her studies. Impressed with the local street art and graffiti scene, Zabou found inspiration and decided to give spray painting a try. The rest is history!


The piece of graffiti by Zabou is of artist BK Foxx wearing her graffiti mask,

BKFoxx is a public artist from New York (Long Island, technically).
She paints photorealistic murals in only spray paint; no brushes, no projectors, no stencils.

She usually starts with an idea or a concept, then sets up a scene and photographs it,
and from that makes a reference image for the wall.
The images are meant to be high quality, potent, and thought provoking to the viewer.

She likes the idea that some art should be temporary,
existing while it is relevant and meant to be appreciated in real time.

She thinks that art is important for everyone, and focuses on public art for that reason.
She believes in honesty, authenticity, and respect.
She wants to make the world a more fair place.

While on the subject of art and artists - album covers have always been interesting on the artistic side. 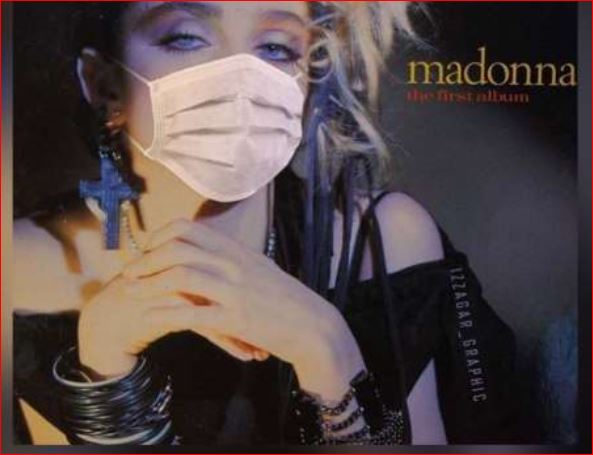 Madonna’s coronavirus content continues, as the pop star gives her debut album cover a relevant edit to reflect the current times.
Madonna, 61, has shared the cover of her first album on Instagram but in this edited version, the singer is wearing a face mask.
The cover is taken from the re-released version of Madonna’s debut, titled Madonna: The First Album in 1985. 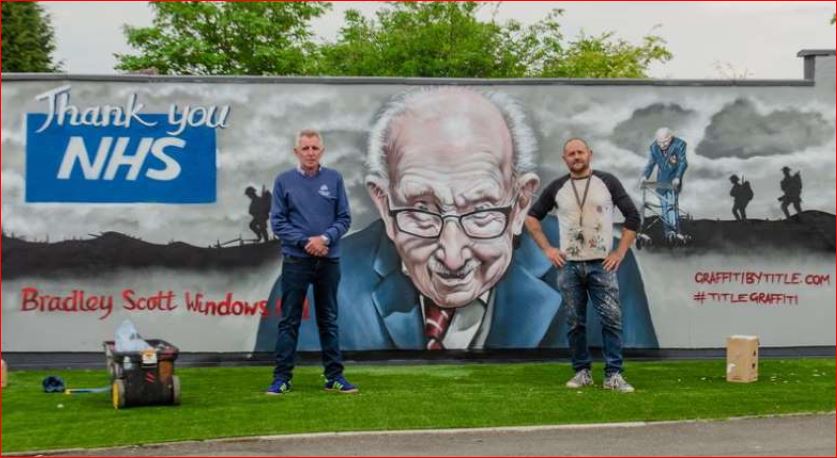 Meet Andrew Mills, the creator of Tamworth's touching tribute to Captain Tom Moore.
Andy, of Graffiti by Title, produced the stunning mural at Bradley Scott Windows in Watling Street yesterday and has been inundated with positive messages ever since.
He admitted: "I am a bit blown away by it all really. I was getting compliments all day. Virtually every car that went past was tooting its horn and everyone that walked past stopped to take a photograph and say how much they loved it.
"That means a lot to me, of course it does. it was fantastic. Obviously what I do is a bit of head turner so I am used to getting a response but nothing like this. I have never had such a positive response in such a short space of time, it is crazy. Everybody loved it. 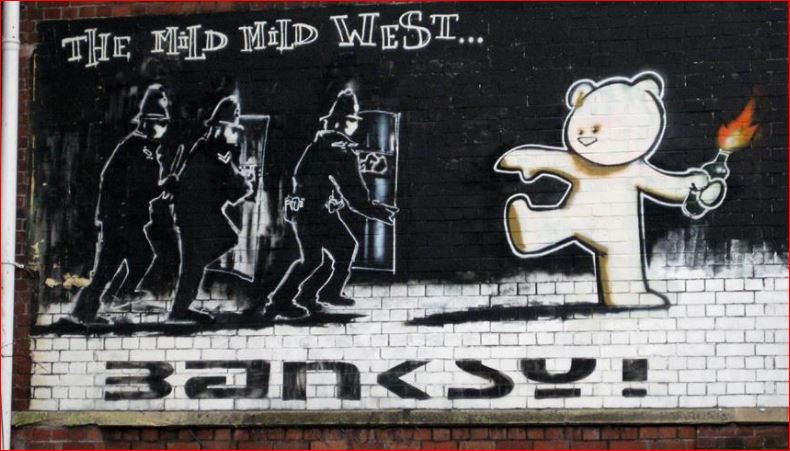 Banksy’s Mild Mild West artwork is located on Stokes Croft, right next to The Canteen Bristol, with the best views being from the Jamaica Street Junction.

Banksy drew the artwork over three days in broad daylight in 1999. It was drawn in response to various unlicensed raves and parties held in abandoned warehouses around Bristol in the 1990s, that drew increased attention from the police. A specific trigger for the mural was such an event at Winterstoke Road, where riot police began to attack partygoers.

The artwork is popular with the local community who consider it a good symbol of the heritage around Stokes Croft. It has been cited as an archetypal piece of Bristol culture, showing how a relaxed hippie can still fight back against the government and commercialisation.

In April 2009, the artwork was vandalised with red paint by an anti-graffiti organisation called Appropriate Media, but was quickly repaired. Bristol City Council announced plans to enclose the mural in glass in front of new flats, which was criticised by the local community because it would make it harder to see from the street. Coexist, an organisation managing regeneration of Stokes Croft, did not understand the vandalism. Their spokesman said, "I don't see how spraying red paint is helping with the positive change" and was happy that volunteers quickly came together to repair it. A dressmaking shop opposite the mural has complained about graffiti, and that continual cleaning has begun to damage the Bath stone walls

With thanks to Bubble T for making me aware of the Mild Mild West.
Always "hope" but never "expect".
Top

Graffiti I saw tonight riding around looking if there was any new art about. Koh Pich 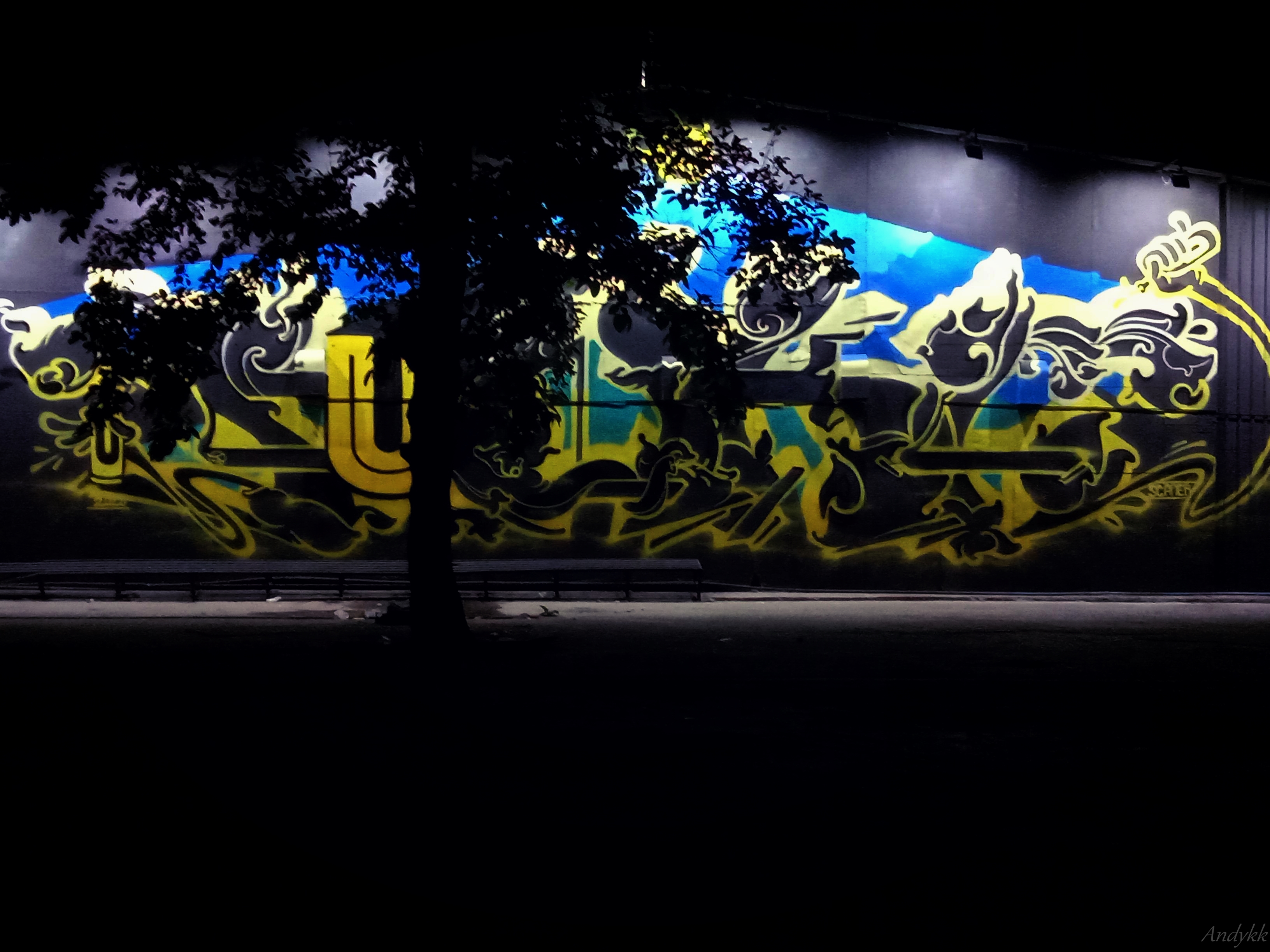 His stuff is often clever, yes, but it is also always contrived, twee, expressing some simplistic counter cultural observation, throw away and quite narcissistic. I am not a huge fan of his stuff but I admire him.

I like old school wild style, semi wild style lettering and especially top to bottom whole cars on trains - which are very rare these days.

I did my History Of Art A Level thesis on Graffiti Art in 1991 and was really into it back then. Less so now but I will still admire a good piece if I see one.

I watched the new movie yesterday; it was interesting alone on the time period it was obviously filmed around. It was like a jog of the past times along with memories of the times.

AndyKK wrote: ↑Sat Nov 07, 2020 10:38 am I watched the new movie yesterday; it was interesting alone on the time period it was obviously filmed around. It was like a jog of the past times along with memories of the times.

https://www.1377x.to/torrent/4462817/Ba ... H264-BONE/
In a nation run by swine, all pigs are upward-mobile and the rest of us are fucked until we can put our acts together: not necessarily to win, but mainly to keep from losing completely. HST
Top
Post Reply Previous topicNext topic
78 posts