The China Machine-Building International Corporation (CMIC) – affiliated to Sinomach subsidiary CNEG – has signed a cooperation agreement with Cambodia’s SNTP Company on providing electricity in Preah Sihanouk province, according to a company press release.

Lu Wenjun, CNEG chairman, said that the agreement on a grid substation and transmission line project in Sihanoukville was signed last week in the Chinese capital Beijing.

A sign for further Chinese fund to come for SHV???
Top

Re: Chinese firm inks deal with SNTP on electricity supply in Preah Sihanouk 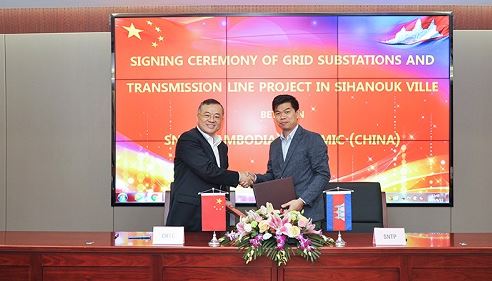 On August 12, in Beijing, China Machine-Building International Corporation (CMIC), affiliated to CNEG, a subsidiary of Sinomach, signed a cooperation agreement with Cambodia’s SNTP Company on a grid substation and transmission line project in Sihanoukville, Cambodia.

A number of projects, including the Tatay Hydropower Plant, the trunk lines and substations of Cambodia’s national power grid, and an expansion of rural power grids, have been jointly built by CMIC and EDC since 2007, said Lu Wenjun, chairman of CNEG, at the ceremony.

Lu promised that CMIC will put the best technology and management into the project as it did in the previous projects to ensure smooth progress.

Keo Rottanak, general director of EDC, the state-owned electricity power company in Cambodia, reviewed the cooperation between the two sides over the years. He said that the Tatay Hydropower Plant has become one of the best hydropower projects in Cambodia. Cambodian Prime Minister Samdech Techo HE has attached great importance to it and inspected the site many times during its construction.

Rottanak was very pleased to see the establishment of a new partnership between CMIC and SNTP, and hoped that the two sides will take the project as a new start and develop diverse cooperation in more fields.

The project will be build in Sihanoukville, Cambodia, and includes the construction of two new GIS substations and a new 230kV and 115kV transmission line of 27 kilometers, as well as the expansion of a substation. The project will greatly relief local power shortages and further boost local economic development.
https://www.webwire.com/ViewPressRel.asp?aId=245634
Cambodia Expats Online: Bringing you breaking news from Cambodia before you read it anywhere else!