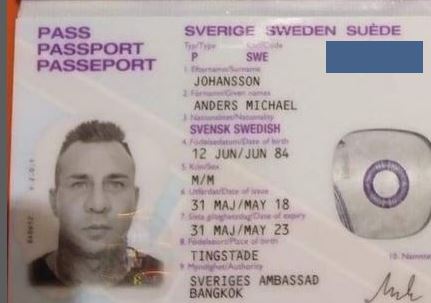 After receiving the information, the local police went to the scene and reported to the prosecutor, the police of technical science , the criminal police of investigation and procedure department (Immigration officials), and the autopsist, for the postmortem examination. The autopsist, Mr. Nong Sovannaroth, concluded that the victim died of a heart attacked caused by drug overdose of methamphetamine and morphine.

The victim's belongings, such as a passport, three phones, a necklace, two rings, a laptop, an ATM card and other cards, money US$5000, 5,720 Bath, 9,8000 riels and personal luggage, were taken to the immigration department to be kept for the family. After the examination, the body was sent to the mortuary in Steung Meanchey Pagoda.
RIP and condolences to the family and friends of the deceased.

There is another thread on this forum, which possibly relates to the death of Mr Johansson: general-chatter/two-irate-swedes-t31498.html
Photos from Khmer news on the darknet forum.
Cambodia Expats Online: Bringing you breaking news from Cambodia before you read it anywhere else!