This is a part of our Cambodia forums to chat about anything Cambodia-related. This discussion forum is at the top of our site because it's usually the busiest part of the expat community chatter with random topics on just about everything, including expat life, Khmer politics, Cambodian blogs we have or have come across, or whatever else our members want to discuss. Whether you're an expatriate, tourist, Cambodian or random traveler just passing through South East Asia, you are welcome to talk about anything or start new topics yourselves.
Post Reply Previous topicNext topic
115 posts

AdamS wrote: ↑Tue Mar 19, 2019 5:24 pm I got told this by the doctor at the Phnom Penh travellers clinic. Seemed like a nice guy, unnverved the hell out of me at first but really warmed to him. Spoke like a mix of Marc Bolan and the hunter from Jumanji, sporting Gary Numans hair. Glad to see their are good old fashioned English eccentric's still roaming free, and equally glad to know he wasn't chatting waffle about the fake notes. Will now withdraw all notes from inside of the bank.

That is undoubtedly the most accurate description of Gavin ever!

Lol. Dr Gav. (I love his quote about being arrested years ago - it’s on the web if you wish to search. Common knowledge I’m not outing him, although the article will...).

For anyone interested it’s the new Jumanji with Dwayne The Rock, not older one.
Top

I have taken several ten's of thousands out of ABA ATMs over the past couple of years. Never had a fake yet.
Top

I heard a rumor that the ABA on 182 across the sports bar ejected $500 in 5 fake notes to someone this week.
Top

ABA Riposte Over Fake Money Allegations
The ABA bank have responded to the recent allegations of fake US$bills from their ATMs. They deplore the tendency of posting allegations on social media, rather than directly addressing the bank.
ABA have posted their reply on social media: 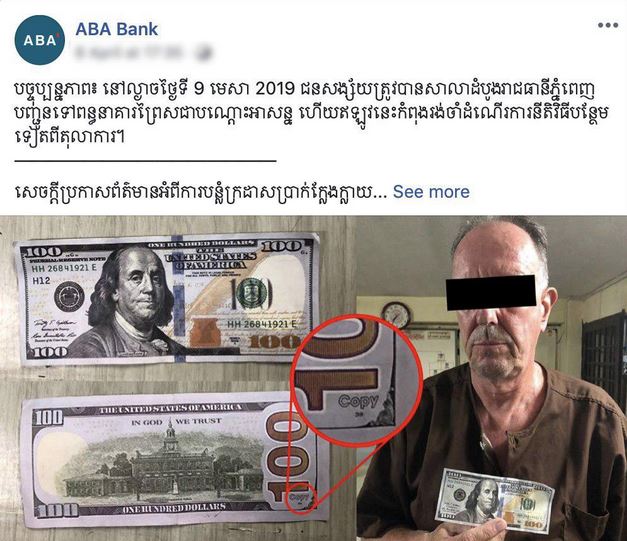 According to Mealy Polin, ABA Bank's Business Development Manager: "Since the middle of last year, we've seen 15 Facebook social networking posts, alleging they obtained fraudulent money from our machines. This is very surprising to us because our problem management office rarely gets complaints about fake bills, either through our bank branches, by phone or online, even if we broadcast widely for customers to request, ask for information, and seek out a solution directly from the bank.Instead, they post on social media before contacting us."

Mr. Igor Zimarev, ABA Marketing Manager, said: "Trust is one of the key drivers of customer service, which is considered to be our core value. ABA Bank closely monitors social networking and will continue to contact clients who posted complaints on social networks about the bank's services by encouraging them to submit complaints or requests to banks directly, rather than posting messages on Facebook or on other websites."
"The best way to address the relevant issues is to get in touch with the bank, where we have a broad range of solutions, including a detailed investigation into the problem," Zimarev said.
"In case of attempts to defraud the bank or to damage our good name, we will take the appropriate legal action. As an example, there is a Swiss man being held in Phnom Penh jail for deliberately replacing real money from our ATM machine with a fake banknote labeled COPY.
According to a thorough investigation, we have determined that the complaints made about fake money are attempts to defraud the bank or undermine our reputation. We are determined to work with law enforcement agencies to ensure that any issues are resolved in a legal way, in which criminal prosecutions can be carried out." 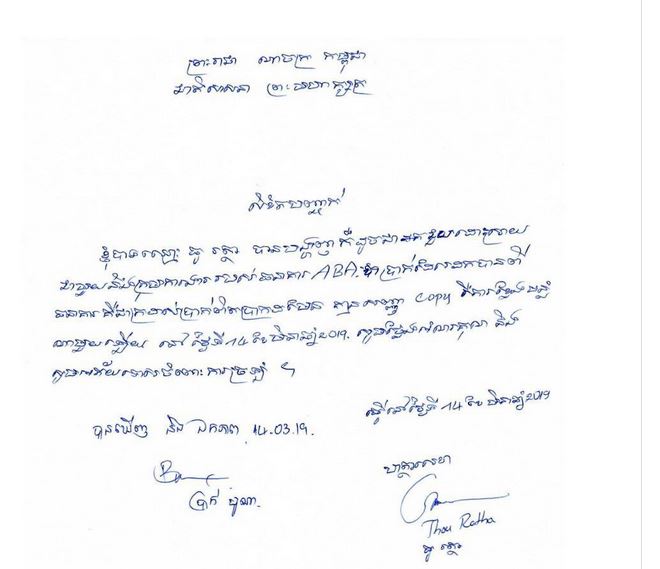 Always threatening and bullying people in every response from the bank is very unprofessional.
They very well know the state of these law enforcement agencies they want to work with.
Very unusual behaviour for a bank.
I wonder why it is mostly ABA who is in the news with these issues, rarely hear about other banks.
They should explain why it's impossible that there is fake money in their ATMs instead of threatening people, that would reassure the faith in this bank.
Top

Another post from ABA today claiming another false accusation: 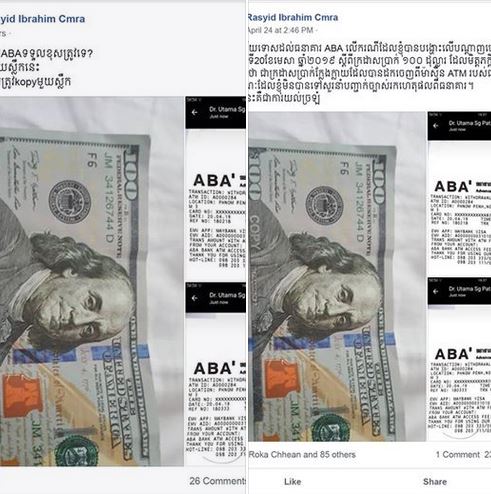 Dear fans,
On April 21, we ran across yet another Facebook post on false COPY note claim from the user Rasyid Ibrahim Cmra who published it on behalf of his Malaysian friend who paid a visit to Cambodia. In his post, Rasyid Ibrahim claimed that one of the five $100 notes his friend had withdrawn from the ATM in ABA Chhroy Changvar Branch contained the word COPY.

The friend of Rasyid Ibrahim withdrew money in the evening of April 20, 2019 and in the afternoon of April 21 Rasyid Ibrahim published his post. Neither of them filed a dispute to the Bank about the case.

Immediately after we saw the publication, our respective team tried to contact Rasyid Ibrahim via Facebook Messenger for details, but he did not reply (while still replying to the comments under his post). We only could get in touch with him and his friend on April 23. Concurrently, we were conducting a thorough investigation on the case. Like in the previous fake note cases, we found no evidence that the note with the word COPY came out of our ATM.

We invited Rasyid Ibrahim and his friend to our office to present our findings to them. Both said they were not able to come as the one who withdrew the money was already leaving Cambodia, while Rasyid Ibrahim claimed he was on a trip to province. We provided explanation to Rasyid Ibrahim via phone call, and he fully accepted it.

On April 24, Rasyid Ibrahim posted his apology to ABA Bank on Facebook for the groundless accusation, still refusing to visit our office.

As before, we reject the accusations appearing online related to dissemination of unfit currency notes and remind all our customers to get in touch with the Bank first before posting anything online. Otherwise, we consider such posts defaming and will act together with the police as permitted by law.
Thank you.

Seems like their sole resource is Facebook. Thank God they're not counting all the reports on CEO!!
Top

King Keil wrote: ↑Tue Apr 30, 2019 10:34 pm Always threatening and bullying people in every response from the bank is very unprofessional.
They very well know the state of these law enforcement agencies they want to work with.
Very unusual behaviour for a bank.
I wonder why it is mostly ABA who is in the news with these issues, rarely hear about other banks.
They should explain why it's impossible that there is fake money in their ATMs instead of threatening people, that would reassure the faith in this bank.

these aren't FAKE BILLS,
it clearly states on them COPY

I seriously doubt ANY bank would put COPY bills in their atm.
In a nation run by swine, all pigs are upward-mobile and the rest of us are fucked until we can put our acts together: not necessarily to win, but mainly to keep from losing completely. HST
Top
Post Reply Previous topicNext topic
115 posts