The odds favor the businessman

As they say here, this is disturbing footage of the conflict between the police and land protesters at Otres, Sihanoukville, but so far, there is no confirmation of the death by shooting that was earlier reported on social media . Rumors abound.

As Cambodia heads towards a head-on crash with the European Union (EU) and the United States government over political freedom and human rights, disturbing video has emerged of Cambodia police shooting at protestors in Sihanoukville, in the country’s southwest.

Said to have been recorded on January 24, the alarming video,was posted to the Facebook page of ‘Chhut Wutty’ on Friday (Jan 25) where it has quickly racked up more than 831,000 views. Several other clips uploaded showing the lead-up to the violence have also received thousands of views.

Appearing to have been recorded from behind the Cambodia police firing line, the disturbing video begins with the sound of guns being fired, as the videographer runs across what appears to be freshly graded land forming part of a new real estate development. In the distance people can be seen running. Police with guns cross in front of the camera, as too does a Cambodia police officer.

As the videographer reaches the other side of a freshly levelled road, the camera captures one woman wearing a motorcycle helmet attempting to help a man on the ground. A person of similar appearance can be seen preparing petrol bombs in the third video on this page. Sporadic shooting can be heard as soldiers gather around people seeking refuge in a culvert.

Continuing to record as he walks along the road, the camera captures a police man holding what appears to be a golf club, before falling on a man lying motionless on the ground.

Additional video shows what appear to be plastic bottles partially filled with petrol lying on the ground, while a Cambodia police officer is seen stomping on a man he has just cable-tied. A man kicks over a motorbike in the background...
https://aecnewstoday.com/2019/disturbin ... lle-video/
Cambodia Expats Online: Bringing you breaking news from Cambodia before you read it anywhere else!

The man who was shot by police is being treated in hospital in Phnom Penh. His family say that he was shot while driving by on his motorbike, and was not connected to the protests. 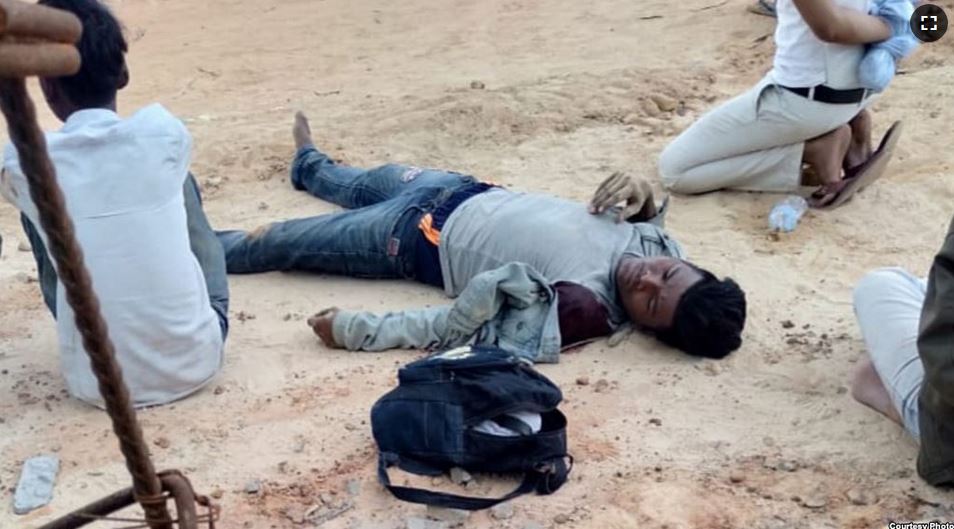 The land was awarded to nine families, but the surrounding area is claimed by politically connected tycoons, leading locals to question the true nature of the court decision.

Tensions are high in Preah Sihanouk, fueled in part by an influx of Chinese investment and imported Chinese laborers, leading to a spike in land prices.

Speaking to VOA Khmer from his hospital bed in Phnom Penh this week, Saroth’s mother said her son was a bystander to the clashes and was driving his motorbike through the area when he was hit by a bullet in his shoulder.

On Ian said Saroth had arrived in Preah Sihanouk to work construction. “He is awake. He can eat a bit, but he can’t move his legs,” she said.

“He was just passing by on his motorbike to buy lunch,” said Lim Pheng, 39, the wife of Saroth’s boss, who has been tending to the injured laborer at the hospital.

Saroth is from a poor family from Battambang province and previously migrated to Thailand for a fruit-picking job. All four of her children are construction workers. She rents a house for $5 per month and cares for her grandchildren while their parents are away working.

Ian said she will not file a complaint about the shooting, but asked authorities to help with medical bills.

The family has spent $1,000 for treatment so far, with funds provided by well-wishers. Remaining in the hospital is costing them $30 per day.

Saroth was left bleeding on the ground for some time before being taken to Preah Sihanouk Provincial Referral Hospital. The severity of the gunshot wound led doctors there to transfer him to Phnom Penh, where he was placed in an intensive care unit awaiting surgery, according to local rights group Licadho.

Four people were arrested and released after they agreed to end protests.
https://www.voacambodia.com/a/one-serio ... 63701.html
Cambodia Expats Online: Bringing you breaking news from Cambodia before you read it anywhere else!

It's become unacceptable to shoot at protesters. There will be an inquiry.

Wrists will be slapped. Hopefully, someone will at least pay the hospital fees and some compensation to the guy who got shot.

The National Military Police has established a fact-finding commission to investigate the use of firearms during a clash between police and residents over a 71-hectare land dispute in Preah Sihanouk province’s Korky village last week.

The clash broke out on January 24 in Prey Nob district’s Bit Trang commune as authorities were measuring disputed land after a court prosecutor was instructed to carry out a Supreme Court decision on behalf of plaintiffs Chhay Narin and Kim Vanna.

According to a Provincial Hall report to the Interior Ministry on January 24, the situation escalated when protestors began throwing stones and petrol bombs at security forces.

It said provincial and military police had no choice but to fire about 20 warning shots. The report noted police are currently looking for a group of instigators who were among the protestors.
https://www.khmertimeskh.com/50573950/p ... lle-clash/

January 31, 2019 / 7:17 PM
Cambodia orders rare investigation of shooting in land protest
Rina Chandran
BANGKOK (Thomson Reuters Foundation) - Cambodian authorities have ordered an investigation into violent clashes over a land dispute in which a protester was shot, after a video clip of the incident sparked outrage on social media.

A man was shot and a 10-year-old boy injured in the clash last week between nearly 300 villagers and 200 policemen in Preah Sihanouk province in the country’s south.

A video clip that surfaced a few days later showed a provincial military police officer beating a protester with an assault rifle, and another kicking the head of a man who lay on the ground with his hands tied.

This week, Sao Sokha, commander of the National Military Police, said a team had been set up to investigate the incident.

“If we find that the provincial military police officials used excessive force, then they would be punished according to the law,” he told reporters.

An activist in Phnom Penh said that while violent protests were common, police investigations such as this were rare, and might have been sparked by outrage over the video clip.
https://www.reuters.com/article/us-camb ... SKCN1PP1IW
Cambodia Expats Online: Bringing you breaking news from Cambodia before you read it anywhere else!

So the land was awarded to nine families, but then a different court decided to give the land to someone else.

Sounds just like the safety of a hard title.

So does that mean that courts can overrule hard titles and in effect hand the land over to someone else?
Top

newkidontheblock wrote: ↑
Fri Feb 01, 2019 9:44 am
So the land was awarded to nine families, but then a different court decided to give the land to someone else.

So does that mean that courts can overrule hard titles and in effect hand the land over to someone else?

They dont have to follow any law. If they just do whatever they can get money from.
## I thought I knew all the answers, but they changed all the questions. ##
Top

To make it short you're pretty safe with a hard title. Those families probably had soft title. If they got kicked while having hard title then nobody's safe in this country.
Don't forget the water buffalo
Top

Well one guy said he bought the land fr some guy in 2005 and was still waiting for a title... After a few months you'd think he would have realized he'd been duped.
Ex Bitteeinbit/LexusSchmexus
Top
Post Reply Previous topicNext topic
41 posts