Breaking news from Cambodia can be found here. CEO often finds Khmer news and translates it into English for our readers if it is interesting to expats, locals, Cambodians living abroad and anyone who wants to stay informed of the latest local and international news stories about Cambodia and our neighbors in South East Asia. There are many sources for Khmer news articles and they can all be found here in one place. Most of the media comes out of Phnom Penh, Siem Reap or Sihanoukville, but we cover national Cambodian news from all provinces.
Post Reply Previous topicNext topic
33 posts

PHNOM PENH — More than 1,000 garment workers have lost their jobs following days of protest calling for wages to be paid for December.

The workers were laid off by W&D Cambodia Co. leading to a strike on January 5. W&D Cambodia had refused to pay the former staff for the month of December, according to the workers.

Workers have reported that the factory has refused to reinstate male and senior staff members.

Ya Kimsrim, 36, a garment worker, told VOA Khmer on Monday: “We held this strike peacefully. This is a non-violent strike. We demand that they take back all the workers, not just choosing young female ones while old-aged and male workers are not chosen. Please don't do that. If they do that, it is as if they're taking in new workers, leaving behind old ones.”

She said that the factory asked the workers to sign agreements in exchange for being able to resume their jobs. But they are yet to be reinstated.

“They said they would let us come back to work. However, only 200 have so far... They choose only the young ones, not the old ones,” Kimsrim said.

“In the letter, they asked us to agree. If we want to go back to work, just sign and provide a thumbprint. So we did just that. We didn’t know that after we provided the thumbprint, the supervisor would discriminate. They take in [workers] selectively even after intervention by the ministry and deputy Stung Meanchey district officer,” said another worker, 45, who asked not to be named for security reasons.
https://www.voacambodia.com/a/some-one- ... 45441.html
Cambodia Expats Online: Bringing you breaking news from Cambodia before you read it anywhere else!

GMAC Issues Press Release on Dispute at W&D (Cambodia)
30/01/19 10:36
Phnom Penh (FN), Jan. 29 - The Garment Manufacturers Association in Cambodia (GMAC) issued a press release to clarify on the dispute at W & D (Cambodia) Co., Ltd., which so far articles disseminated both on websites and social media have been one-sided by some media outlets, and that the contents of those publications do not reflect the true reality and mislead the public.

GMAC would like to inform the public and media that the dispute at W & D (Cambodia) Co., Ltd. happened on 24 December, 2018 at 12:30 pm until the present, during which 1,729 workers went on strike to demand the company to pay the seniority indemnity as a lump sum before 2019 and count the seniority indemnity prior to 2019 the same as 2019, GMAC wrote in its press release dated Tuesday.

“Articles on the labour dispute at W & D (Cambodia) Co., Ltd. have been one-sided by some media outlets both on websites and social media, and the contents of those publications do not reflect the true reality and mislead the public,” the press release added. 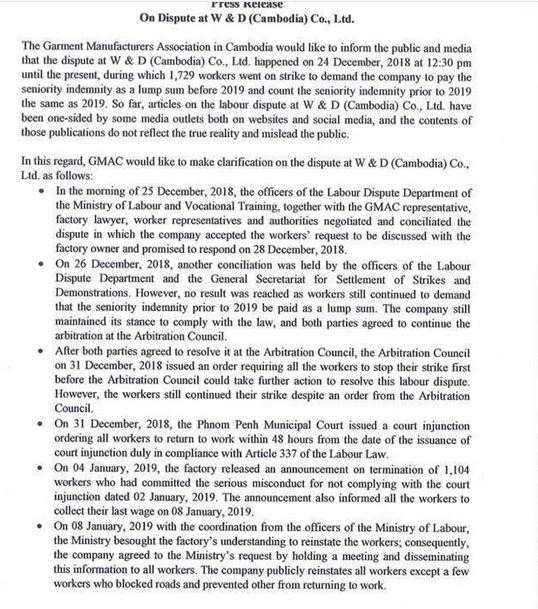 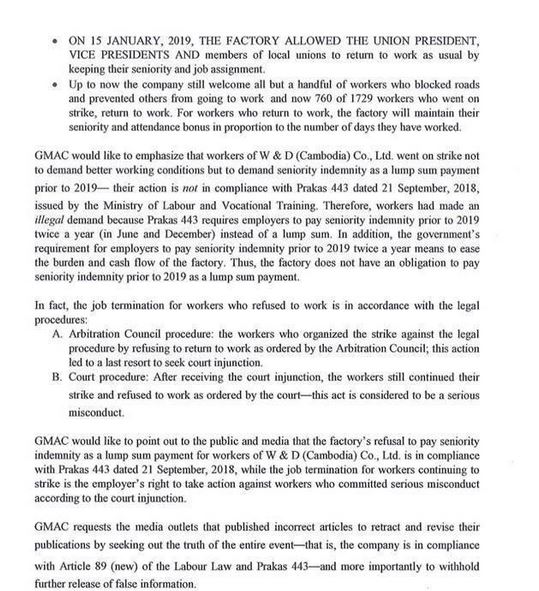 http://en.freshnewsasia.com/index.php/e ... 59-53.html
Cambodia Expats Online: Bringing you breaking news from Cambodia before you read it anywhere else!

Sorry but this "clarification" seems nonsensical. Have the workers been paid or not? Seems to me they want to get rid of all senior employees so they dont have to pay the bonuses. Am I missing something?
Top
Post Reply Previous topicNext topic
33 posts