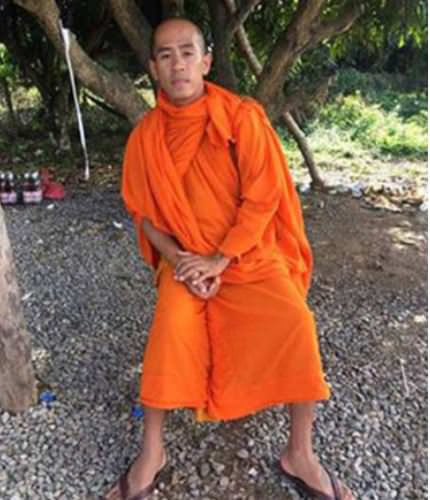 A Buddhist monk on Tuesday was defrocked and expelled by the Pailin provincial religion and cults department over an allegation that he sexually abused a three-year-old girl in Pailin city on Monday.

He noted that Mr Sereyrath was arrested on Tuesday, but was released because medical examination on the child did not show any sign of sexual penetration.

Cap Saroeun said that on Monday morning, Mr Sereyrath travelled to Pailin city to beg for money and food and stayed with a monk friend in the pagoda in Pailin commune.

He said that at about 9am on Tuesday a woman saw Mr Sereyrath taking a three-year-old girl, who lived nearby, to a bathroom in the pagoda.

Cap Saroeun said the woman saw them coming out after five minutes, after which Mr Sereyrath gave her $0.10.
He said that the woman suspected that he had sexually abused the child and alerted police.

Sam Savoeun, provincial religion and cults department chief, yesterday confirmed that during questioning by the provincial chief of Buddhist monks Mr Sereyrath denied the allegations, saying that the girl walked after him in order to beg for money from him and he gave her 500 riel out of pity.

“Although he denied that he committed sexual abuse or attempted to rape her, his actions affected the monkhood’s regulations and dishonoured the religion,” Mr Savoeun said. “We then decided to defrock him and expelled him from the pagoda.”
https://www.khmertimeskh.com/50559522/m ... sex-abuse/
Cambodia Expats Online: Bringing you breaking news from Cambodia before you read it anywhere else!