Thailand sentences ‘jet-setting monk’ to a century of prison
By Coconuts Bangkok Aug. 9, 2018 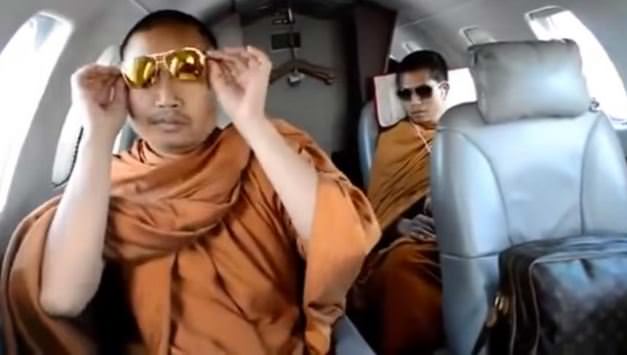 A Thai court today sentenced a former monk, infamous for his jet-setting lifestyle, to 114 years behind bars, just a bit more than a year after he was extradited from the US.

Wiraphon Sukhon, formerly known as Luang Pu Nen kham, made headlines in 2013 with leaked footage that showed him traveling on a private plane, while wearing brand-name glasses and toting a Louis Vuitton bag.

Wiraphon, now 39, was today convicted of money laundering, fraud and violating the Computer Crime Acts after scamming 29 people out of THB28.64 million (US$800,000), which he was ordered to repay to his victims.

From 2009 to 2013, Wiraphon reportedly manipulated his worshippers in the Northeast to donate towards his religious projects, one of which was allegedly to build the world’s largest jade Buddha in Ubon Ratchathani province.

In the end, he never fulfilled his promise, instead fleeing to the US with help from his worshippers there, according to police. He spent the money buying 10 cars, including a Porsche.

The US extradited him to Thailand last year after he was accused of raping a minor. The court seized his THB43 million (US$1.3 million) in assets when he arrived.

The ruling in the rape case is expected in October, a public prosecutor said.

The monk is accused of having sex with an under-age girl around a decade ago and fathering a child with her. He faces the prospect of an additional 20 years behind bars if convicted.

Additional reporting from AFP.
Cambodia Expats Online: Bringing you breaking news from Cambodia before you read it anywhere else!

Religion pays, different uniform same business model. With the moral benefits.
Never trust a man who when left alone with a tea cosey, doesn't try it on.
Top

what a crazy story