This was a report on the Expats and Locals Living in Phnom Penh group: 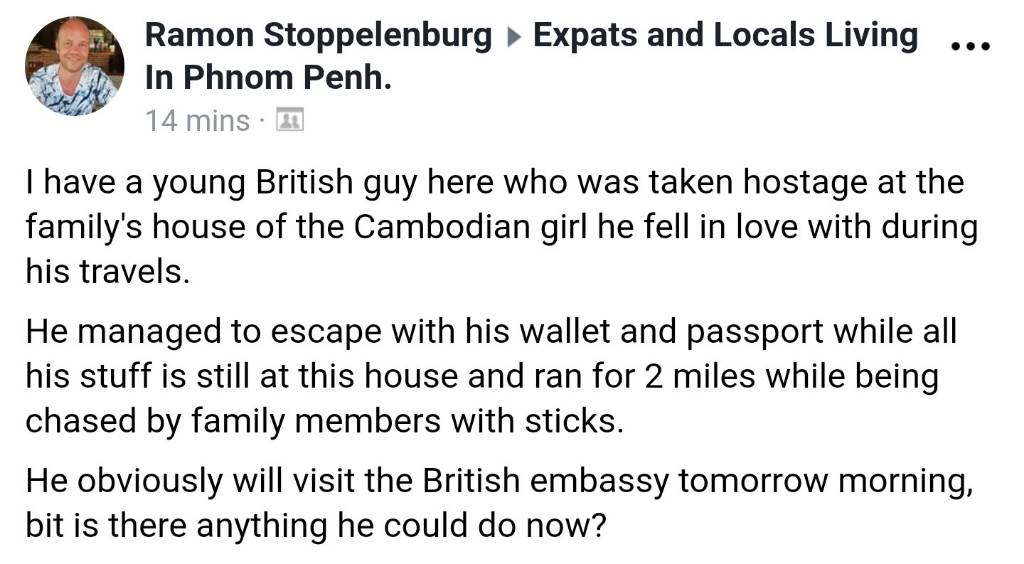 'I have a young British guy here who was taken hostage at the family's house of the Cambodian girl he fell in love with during his travels.

He managed to escape with his wallet and passport while all his stuff is still at this house and ran for 2 miles while being chased by family members with sticks.

He obviously will visit the British embassy tomorrow morning, bit is there anything he could do now?'

get an expat posse together! and go luggage hunting!

For what reason was he taken hostage? For ransom? Is it possible he's full of shit/scamming you or that this is the vivid imagination of a young man on meth?

the family members must be pretty poor if they don't have one moto between them, to chase him some of the 2 miles.

Did you see him running down the street towards your place being chased by people with sticks?

Did he tell them England would win the world cup, and they bet their life savings on it?

May I ask did he by chance deflower this girl and/or knock her up?

he probably wanted to use a condom, and they got angry.

The Embassy will do nothing. They will not intefere in a what is a Cambodian legal breach. He needs to go to the Police and follow in Country protocols. Do not set up any level of expectation of assistance from the Embassy - there won't be any.

I believe if a khmer family was chasing him down the street with sticks. He wouldn't have gotten away. Keep your belongings close and call the police now. No need to wait until tomorrow if there really is a situation.

He should call the embassy for advice. I belive there is officer stanby for assistance. If the embassy cannot be reached, he should report to local police.

Only real police assitance I was informed by the British consolate was on 158 st....they managed to undetstand anyway.

I’d have to guess that he met this girl, whose family assume she is still a virgin (whether she is or not), slept with her, she took him to meet her family, they found out that he had slept with her, and now they expect him to marry her and give a fair amount of money to the family.
When he baulked at this, they took exception.
There’s definitely a few details missing from the original post.
"Life is too important to take seriously."

Same old story! If I had a nickel for every time...

You're not a REAL expat in Da Bodge until this happens to you... and getting banned by Howie.
I am sooooo very sorry if you can't understand or appreciate my sarcastic facetiousness.
Top

I don't believe that a Cambodian family would chase anyone on foot for 2 miles. Surely the family have motorcycles or bicycles, in which case they would have caught him.
Top

He stayed at mine last night and I drove him to the airport this morning so I got a pretty good grasp of the situation.
He met this girl a few months ago while traveling here, they spent the night together then kept in contact after. He went to Australia to work but was still messaging the girl, she made him feel very comfortable when talking and eventually asked if he wanted to come and stay with her family. He came over and started staying with them, but he said it was instantly suspicious. Nobody in the family worked, the men say around and played poker all day with various people that came and went, the mum collected money from others that came and went, he said sometimes these interactions got very heated. Then everyone he wanted to leave the house the family would go with him, they would take him to restraints where everybody knew the family and was scared of them, they always made him pay. He said it seemed like everybody knew them and everybody was scared of them. They kept on telling him that the police would never touch them because they paid them off. He also said there were knives placed all around the house in convenient places, like the front gate. He also said there was two big guys who were almost always on the door and two big German shepherds that followed them about. One day one of the kids (who he says were beaten severely and daily) pushed his phone off the table and smashed it, however he had a spare phone. Then when he told the girl that he was going to go on his laptop she disappeared and then when her tried he couldn't get on any sites that involve global communication, such as facebook, gmail and outlook. Eventually when he managed to escape he grabbed his essentials, like his passport, wallet and phone. He made a run for the door and pushed through the doorman, then everybody started chasing him including the dogs. Eventually after running for a while it was just a moto or two that were chasing him, he said there could have been a car too but he might have just been paranoid. He tried to get into a pass app but the guys pulled up next to the pass app and said something in Khmer then the driver told him to get out, then he went into two hotels and the same thing happened, I imagine they were telling people that he was a thief or on drugs or both. He tried to talk to a few other expats/travellers and all for help, but they told him to go away, even though he was shaking and crying. If any of you are those people, grow some fucking balls, inaction can be a form of immorality too. But anyway, eventually he met my friend who took him to flicks, then I got their not long after. He was still shaking and crying and looked absolutely terrified. It was quite obvious that this was legitimate. I invited him to stay at mine when he felt comfortable enough to move again, then I have him a ride to the airport this morning, he should now be in Bangkok waiting for his connecting flight home, all is well.
He said that the girl called herself Sophie and sheer worked at riverside bistro, he said he thought that the house was on St 83 but I couldn't find that street on maps, I think it was probably St 81.
But they're you go, stay safe folks, always wear a condom and know where your exits are.
Too weird to live, too rare to die
Top

Sophie from Riverside Bistro living with a mafia family with men sitting around gambling and a fat doorman and 2 German shephers and 2 motorbikes and maybe a car that all chased him running on foot. When nobody buys the restaurant telesales becomes desperate.
Top

Coincidence that he escaped the day England went home?
Top

Photo of the girl or it didn't happen (want to see if she was worth dodging bouncers, various knives, and two German shepherds).
Top
Post Reply Previous topicNext topic
26 posts