HOW to spot a fake Rolex

HOW to spot a fake Rolex

This is purely for those who wish to know how to spot a fake Rolex,for those who are collectors some of this information you most likely know already!

1. Inspect the Insert Details
“First, the insert is clearly inauthentic based on typical fonts seen in an era-correct ‘Fat Font’ Submariner insert. The Lume dot (or “Pearl”) within the triangle at the 12 o’clock position has a metal surrounding, which is also not correct for this piece. The other thing that immediately jumps out to me is that the patina (or fading) on the insert looks manufactured or created. A replacement or non-authentic insert doesn't always mean that the watch is fake or inauthentic. But when I think of patina, if it looks overdone or manufactured, then it most likely is. True patina or fading is something that is hard to fake — it takes time.”

2. Go Under the Loupe
“Next, I look at the dial under a loupe [aka a jeweler’s magnifying glass] with at least 10x magnification. We use a very special loupe that also has UV LED light because it allows us to see the difference in texture and flaws. If it’s been refinished, you can see it much easier.” Here, Barr is primarily concerned with the lume, a luminescent solution that was brushed on vintage watch dials to make them glow in the dark. Vintage watches were treated with a now-banned radioactive isotope called tritium that lights up under UV. Here, the tritium “didn’t react correctly with the dial, so it was 110% fake,” says Barr.

“The patina or coloration of this lume is consistent and even kind of a dirty or sandy like coloration, which is not a dealbreaker. But the consistency of the lume on the watch we are looking at looks off, especially in the hand. This dial, when looked at directly under UV, did not react as it should have — by emitting a green glow. Also, under close inspection, the lume plots looked blotchy and kind of clumpy. Even the most Tropical and distressed dials have some form of uniformity and consistency.”

3. Fonts Are Difficult to Imitate
“From the beginning, Rolex was a stickler when it came to quality control and consistency, even though many of the manufacturing processes in the '50s, '60s, '70s and '80s were done by hand. Here, the font is off. It's not as crisp as it should be: the sixes in 660ft are too fat, and the text possesses other inconsistencies.”

4. Serial Numbers Don't Lie
“The serial number is another concern. The inauthentic example has a 4.0M serial number, which would date the case of the watch to 1975. Rolex stopped doing meters-first dials around 1969-1970. It’s unlikely to see a meters-first dial in a mid-‘70s Submariner, even as a ‘service’ or replacement dial. It’s more likely to see a feet-first dial in an earlier watch due to the dial being replaced at a later service interval due to damage or discoloration.”

“The correct serial number for a 1968 Ref. 5513 should be in the 1,752,000-1,900,000 range. The other slight thing to note here is that the stamping of the reference and the serial numbers is shallow and very faint — you can barely see it in the case it's so shallow compared to the genuine and correct .”

5. Watch the Crown
“The crown [meaning that small knob you use to adjust the time; not the Rolex crown] on this specific example is also incorrect for a couple of different reasons. In completely original condition, meters-first watches should have a twin-lock crown that has no dots or underline beneath the coronet [aka the Rolex crown]. This isn't a dealbreaker, as many vintage watches have received an ‘upgrade’ by Rolex to a Trip-Lock crown during service intervals, as the trip-locks provide increased water resistance”.


“But what is interesting here — and what makes this a fake — is the spacing of the dots underneath the coronet are too close together, and the Rolex Coronet is too wide at the bottom and too short and fat.” Compare the example immediately above (which is real) with the fake (second photo above), and the differences in the coronet embossing make themselves quite apparent.

6. Know Your Movement
“The movement is last thing that is commonly seen with this type of fake vintage Rolex. Here, the movement is Rolex, but the reference 5513 uses a Rolex cal 1520 movement and not a cal. 1560, which is pretty crazy if you think about it: the movement is genuine Rolex ... just not the right one for a ref. 5513 Submariner.”


“The guys who are making these fakes are clearly catching on that there is a desirability for fake vintage watches, and they are getting better and better at figuring out how to dupe a potential buyer who may not have the knowledge or tools to make an informed purchase.”
Everyone is equal. Everyone has a place. No one is written off, because there is worth and goodness in every life... That is the Republican ideal. And if we won't defend it, who will?
Top

Much easier: if the asking price is USD 50.00, it is probably fake.
Top

Would people genuinely feel comfortable wearing a Rolex (or other expensive watch) in Cambodia?
Top

cue: how to recognise a fake watch-shaker
Top

Re: HOW to spot a fake Rolex:

The outstretched hand, holding the proffered Rolex, is attached to a smiling Indian gentleman with a fabulously lush mustache.
Top

The outstretched hand, holding the proffered Rolex, is attached to a smiling Indian gentleman with at fabulously lush mustache.

cautious colin wrote: ↑
Tue May 29, 2018 11:58 am
Would people genuinely feel comfortable wearing a Rolex (or other expensive watch) in Cambodia?

I know plenty of people, both foreigners and locals who do. They are a very common status symbol for the wealthy.
Top

bolueeleh wrote: ↑
Tue May 29, 2018 12:22 pm
here in ASEAN its more like a scrunchy dude with tattered baseball cap and flip flops carrying a homemade cigar box like wooden case

I guess you haven't enjoyed an early evening meal on riverside lately.

Three of my last five dinners included a sudden encounter with a nattily dressed and quite dashing Indian fellow with a fist-full if timepieces.
Top

cautious colin wrote: ↑
Tue May 29, 2018 11:58 am
Would people genuinely feel comfortable wearing a Rolex (or other expensive watch) in Cambodia?

I know plenty of people, both foreigners and locals who do. They are a very common status symbol for the wealthy.

Even my cat has one! 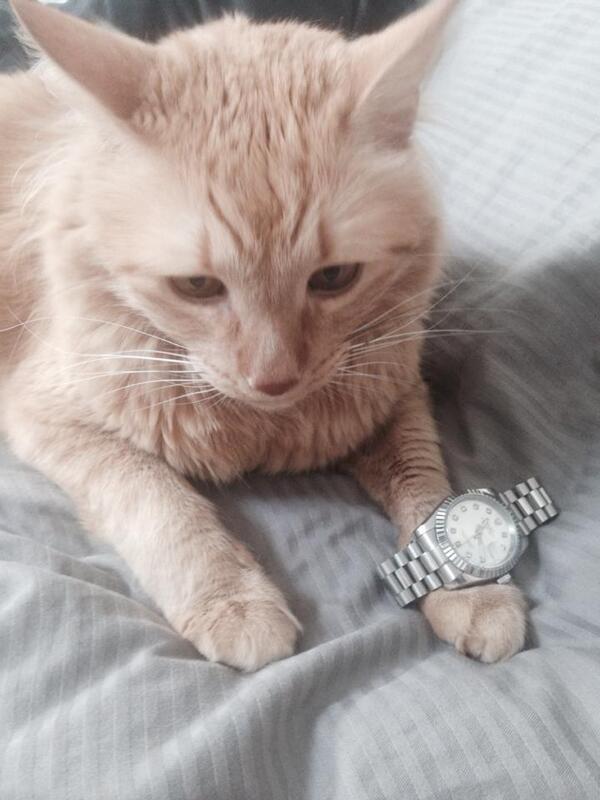 Yea , but not necessarily everytime if only 1 ( you maybe could get lucky but maybe those days are over too ) but for shure the example of one above. who says have many for 50