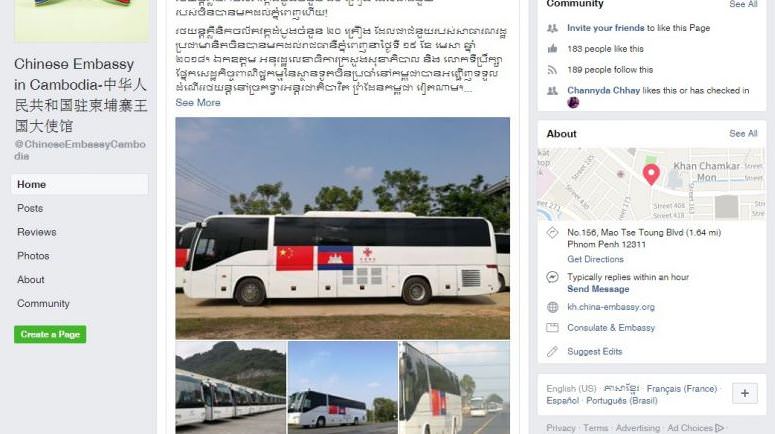 Sporting a fuzzy photo of the two nations’ flags as its profile picture, the first activity on the page was on March 28, when a cover photo was uploaded. Sunday marked the first time the page shared a status update, a post in Khmer announcing the operation of 20 mobile clinics in the Cambodian countryside funded by Chinese aid.

While the Facebook post was written in Khmer, the Chinese Embassy in Cambodia’s official website is offered only in Mandarin and English. Chinese embassies in other countries in the region, including in Myanmar, Thailand, and Malaysia, have Facebook pages with posts shared in English or in the local language.

Facebook is the dominant social media platform in Cambodia, with 4.8 million users reported last year. Tensions between China and Cambodia have risen in recent months, particularly in the coastal town of Sihanoukville, where many local business owners have complained of being pushed off their land and losing profits due to an influx of Chinese tourists and businesses in the city.

Facebook has been banned in mainland China since 2009, and the country has fostered local social media platforms to facilitate the government’s strict censorship laws.
https://www.phnompenhpost.com/business/ ... e-cambodia
Cambodia Expats Online: Bringing you breaking news from Cambodia before you read it anywhere else!

The irony is that Facebook is banned in China
Water quenches the thirst, alcohol releases the truth.
Top
Post Reply Previous topicNext topic
2 posts • Page 1 of 1