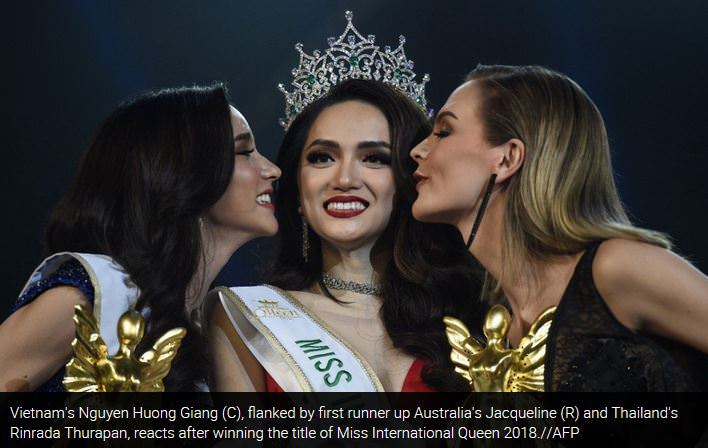 The red-dressed winner fended off 26 competitors, from countries spanning Mongolia to Mexico, to clinch the coveted crown in the seaside town of Pattaya, where the popular contest has been running since 2004.

While the competition is fierce, contestants say the pageant also offers an opportunity for camaraderie among trans women who hail from different backgrounds but share similar stories of discrimination back home.

Ahead of the coronation late Friday, the diverse group of competitors packed into a bustling dressing room to lacquer on lipstick and primp their hair as an army of stylists buzzed around them.

Vietnam, where this year's pageant winner hails from, has seen a growing LGBT scene in recent years while its communist government is drafting a landmark law that could allow some trans people to legally change their gender.

Joe Wong, who works with the advocacy group Asia Pacific Transgender Network (APTN), applauded contests like "Miss International Queen" as a "powerful medium to showcase the challenges, talents and hopes of trans people".

"I've learnt from others that contests like these create sisterhood and bonds," he told AFP, adding that the pageants would however benefit from a more inclusive definition of beauty.//AFP
Cambodia Expats Online: Bringing you breaking news from Cambodia before you read it anywhere else!