Yeah, that place out 'there'. Anything not really Cambodia related should go here.
Post Reply Previous topicNext topic
7 posts • Page 1 of 1

Japanese electric toilets are complex, so an easy international sign language has been developed to explain how they work to foreigners. 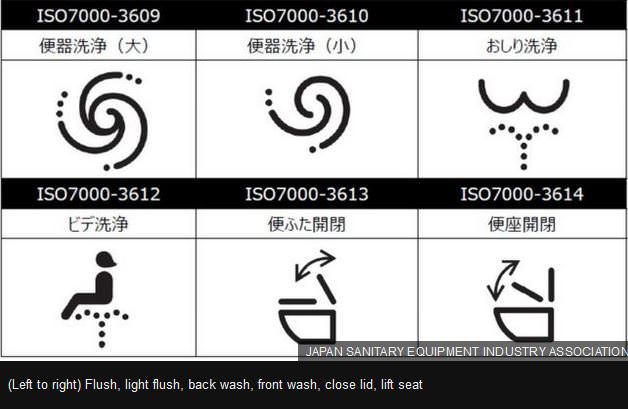 Six pictograms, including one illustrating a stylised bottom, have been accepted as the global standard for the use of electric toilets.

Japan's Kyodo News Service says that the six illustrations have been accepted by ISO, the International Organization for Standardization, to show users which buttons to press when operating high-tech Japanese toilets and bidets.

The Ministry of Economy, Trade and Industry says it's aimed at making life less daunting for tourists visiting the country, especially given the rush of visitors expected for the 2020 Summer Olympics in Tokyo.

The Japan Sanitary Equipment Industry Association devised the symbols last year after manufacturers agreed to use the same images on all of their products, and they've now declared that "anyone can use an electric toilet with confidence".

They also hope that the standard symbols will help sales of the high-tech toilets, complete with their hot-water flushes and self-closing lids, around the world.
http://www.bbc.com/news/blogs-news-from ... e-43224316
Cambodia Expats Online: Bringing you breaking news from Cambodia before you read it anywhere else!

WTF is the first one... typhoon mode??? The second one, I don't have fuckin' clue either.

I tried to use one of the stupid things once and had water shooting across the room.

First would be full flush, and second would be half flush.

But I'm just guessing. I will defer to BKKTRAPPER's greater knowledge of all things Japanese.
... give 'em a quick, short, sharp shock ...

Lol. Full flush, light flush, back wash,front wash,lift seat, close lid.
(It's written underneath.)
What I hate most are the toilets that self-flush unexpectedly when you are sitting on them.

First trial run made me jump as water was freezing and I had sat too far back. Almost shot my nuts off.
Top

fancy japanese toilet - 1000$, bum gun - 3$, look of bewilderment from your guests - priceless
Money is not the problem, the problem is no money
Top

But I'm just guessing. I will defer to BKKTRAPPER's greater knowledge of all things Japanese.

nearly all toilets are electronic in japan.

all those buttons are impossible to figure out.
Top
Post Reply Previous topicNext topic
7 posts • Page 1 of 1