Breaking news from Cambodia can be found here. CEO often finds Khmer news and translates it into English for our readers if it is interesting to expats, locals, Cambodians living abroad and anyone who wants to stay informed of the latest local and international news stories about Cambodia and our neighbors in South East Asia. There are many sources for Khmer news articles and they can all be found here in one place. Most of the media comes out of Phnom Penh, Siem Reap or Sihanoukville, but we cover national Cambodian news from all provinces.
Post Reply Previous topicNext topic
27 posts

A British tourist suffered serious injuries to her legs on Tuesday when she was attacked by a wild buffalo while walking through a forest to get to a beach on an island off Cambodia’s coast.

Police said the British woman was attacked on Tuesday while on her way to visit a beach on Rong Sanloem Island in Preah Sihanouk’s Koh Rong Sanloem commune.

Nop Panha, the Preah Sihanouk provincial deputy police chief, said a military force was on standby on the island.

“We cooperated with the military force stationed on Koh Rong to search for the buffalo, which was hiding in the forest. The victim was a British woman. She was seriously injured and was sent to the Preah Sihanouk town hospital,” he said.

According to her passport details posted on a local media website, the victim was Fiona Childs, 47, a British citizen.

Pol Phosda, the chief of Sihanoukville police, said the buffalo was found in the evening and the owner agreed to cover the medical expenses of the victim.

“The military force found and caught the buffalo. It’s hard to punish the owner of the buffalo because it was unintentional and out of his control. Now he has undertaken the responsibility of paying for the medical expenses of the victim and he is willing to let the military kill the buffalo if need be,” he said.

prahocalypse now wrote: ↑Tue Feb 20, 2018 8:41 pm
“The military force found and caught the buffalo. It’s hard to punish the owner of the buffalo because it was unintentional and out of his control. Now he has undertaken the responsibility of paying for the medical expenses of the victim and he is willing to let the military kill the buffalo if need be,” he said.

That should go down well with a few cases of ABC. 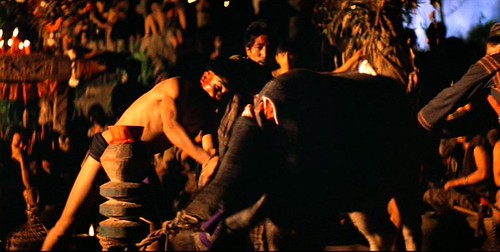 Cambo Dear wrote: ↑Tue Feb 20, 2018 8:23 pm That surprises me as I had always been led to believe that, despite their size, water buffaloes are very placid - at least that's what the missus has always said. I wonder what made it go off at her?

Signs of mental illness already noticed by fellow expats on Koh Rong. It seems the attacker was a lone wolf. I mean lone buffalo. Taken from CEO's Facebook page:

"It's been more than 2 weeks hanging between saracen bay and the few jungle paths to the other beaches, there's pictures of it being on saracen bay, tourists find it funny, locals were scared (lonely old male).
About 2 weeks that the cops and military know about it... just waiting for a good reason to kill it (already charged some staff 10 days ago).
Could have been avoided, but better wait and see ... kow"
"Life is too important to take seriously."

From previous comments, the buffalo wasn't actually on Koh Rong then ?, unless it swam between the islands ?

Water buffalo can be unpredictable. And when they go loco, they are dangerous.
This thread was about an unprovoked attack on a 10 year old girl:
topic10641.html
Top

Agreed, I have a lot of respect for cows, buffaloes, and anything else that weighs a few hundred kilos and has to pointy things sticking out of its head.

Was she trying to ride it naked?
Top

hanno wrote: ↑Wed Feb 21, 2018 8:45 am Agreed, I have a lot of respect for cows, buffaloes, and anything else that weighs a few hundred kilos and has to pointy things sticking out of its head.

Its massive size is controlled by a brain, if not the size of a walnut, possesses a similar IQ.

As my old Cajun bait seller used to say, "I opes you luck.
Top

I think this is her:

Fiona Childs left the UK in 2004 and has made Asia her home ever since; she has lived in the Maldives, Cambodia, Bali and Singapore. Through her work as a community artist, primary school teacher and teacher trainer she has been a keen advocate for environmental education. Taking up scuba diving led to a passion for marine conservation, which includes the building of new coral reef structures. As a project manager for Shark Savers Singapore, she helped to raise awareness through presentations, public events and art projects, including the design and construction of a 9-metre whale shark.

This is one of her articles on sharks: https://www.gaiadiscovery.com/marine-li ... -soon.html
Top
Post Reply Previous topicNext topic
27 posts