Breaking news from Cambodia can be found here. CEO often finds Khmer news and translates it into English for our readers if it is interesting to expats, locals, Cambodians living abroad and anyone who wants to stay informed of the latest local and international news stories about Cambodia and our neighbors in South East Asia. There are many sources for Khmer news articles and they can all be found here in one place. Most of the media comes out of Phnom Penh, Siem Reap or Sihanoukville, but we cover national Cambodian news from all provinces.
Post Reply Previous topicNext topic
407 posts

PHNOM PENH (Reuters) - A Cambodian court has dropped charges against all but one of a group of 10 foreigners who were charged last month with producing pornography at a party in the tourist town of Siem Reap, the court said on Monday
Top

Some funny Youtubers discuss this story:

Cambodia court drops pornography charges against nine foreigners for ‘sexy dancing’ at pool party
A British national who organised the party will face trial
UPDATED : Monday, 19 February, 2018, 5:37pm
A Cambodian court has dropped pornography charges against nine of the 10 foreigners arrested last month at a pool party in the tourist town of Siem Reap, an official said Monday.

“The court has dropped charges against the nine foreigners released on bail. Only one British national will face trial,” court spokesman Yin Srang said, declining to elaborate.

Their lawyer Ouch Sopheaktra said the Briton was held because he was accused of renting the villa and organising the pool party.
AFP
Cambodia Expats Online: Bringing you breaking news from Cambodia before you read it anywhere else!

so, the only one that is being charged is the organizer, good
should also have gotten the MC as he pushed them to do the dirty.....

wonder how much $$ they parted with to get the charges "dropped", ( not the same as out on bail)
In a nation run by swine, all pigs are upward-mobile and the rest of us are fucked until we can put our acts together: not necessarily to win, but mainly to keep from losing completely. HST
Top

Tom Jeffries, one of five Britons arrested for "pornographic dancing" in Cambodia, tells Sky News how he vomited from panic when police raided their party and handcuffed the group.

He describes the uncertainty of being locked up in a dank, crowded jail cell and says he's worried about his friend still detained and facing the prospect of a trial.
My friend and I had just arrived at the party, having missed the movie we wanted to watch, and were drinking a couple of beers by the pool.

It was painfully similar to every other party in Siem Reap.

Then the rain started and we all cowered underneath a small porch. I had no idea that anything going on there could be considered offensive.

The police came in. They separated the bulk of the tourists and left the 10 of us separate.

They started throwing accusations around and tried to work out who owned the villa – originally blaming me for reasons I still don't understand.

Soon, a few of us were in handcuffs and I started having a panic attack and felt the need to throw up.

I was let out of my cuffs and they put me on a chair in front of the other people. I was provided a bucket and started to be sick.

That was the start of a feeling that wouldn't leave me for two weeks.

The next few days were a blur of police officers, translators and forms in a language I had no hope of understanding.

Before I knew it I was stood outside a prison, still with no idea why I was there. The only thing we had been told is that we were under investigation and it could take some time.

So there started my time in a Cambodian prison.

A small cell with 23 other people, a hole in the corner to use for any and all types of sanitation and worst of all no idea how long I would be there for.

Allowed out to a courtyard briefly twice a day, I tried to stay strong, helped by my friends, but inevitably had some dark days.

This carried on for days, with various glimmers of hope being dashed on what felt like a daily basis.

Then we got told to put on "freestyle" clothing - something that only happened once before when we were unwillingly put in front of a Cambodian news network - and five of us were pulled from the cell.

We got released - into what we weren't told.

I still have little to no knowledge about what happened to get me released, but I do know that it in no way stopped my fears.

Yes we were out. But did we still face trial? Would I be able to return home? What would my future hold after this wrongful arrest and detention?

I am sat, two weeks later, safe at home. But my friend is still there. Stuck. Scared. And now alone.

I found that a quick Google search of my name brings up less-than-savoury news articles, and that few news outlets have mentioned that all charges against me have been dropped.

I did nothing wrong, but this will affect the rest of my life.

Mr Jeffries was not deported from Cambodia and was not charged.

now here's how they do dancing in Phuket


A New Zealand man jailed in Cambodia for “pornographic dancing” has revealed he drank pig’s blood while imprisoned and claims his passport was withheld until he paid $7000 in cash.

Paul Brasch, 32, spent almost two weeks locked inside a tiny cell with dozens of other prisoners where he had to pay for his meals or faced eating snakes kept alive on-site by his jailers, The Sun reports.

Mr Brasch was one of 10 people, including five Brits, jailed in Siem Riep after authorities raided a pool party on January 26 and accused partygoers of offending their culture with “pornographic dancing”.

Mr Brasch told The Sun Online he was kept in a tiny overcrowded cell with about 30 other inmates.

The prisoners used water bottles for T-shirts and had only a hole in the floor in the corner for a toilet. It was so cramped they slept almost on top of one another.

Everyday his jailers would taunt the group by joking they were about to be released and he was given just four hours’ outside time every day.

“One day this guy came out with three pythons and just threw them into the yard,” he said.

“They were all chasing people and everyone was just jumping away from them and were like: ‘What the hell?’

“One guy grabbed one’s head, and another guy grabbed the tail, and started like, whacking it on the ground to loosen up its insides.

“And then they started force feeding fish into its mouth.”

Another prisoner then explained to Mr Brasch the snakes were fed to inmates along with the pig’s blood if they had no money to pay for food.

“Even the Cambodians said: ‘Look, you don’t want to eat this’,” he said.

After trying the pig’s blood and immediately vomiting in his mouth, he decided to pay $2.50 a day for a meal of rice and beef, and an additional $6.40 a month for electricity.

Later the group would be forced to apologise for the crime — which they have always denied — on Cambodian television. They were warned prison guards would make their “lives hard” if they did not.

Mr Brasch also described a corrupt justice system full of bribery and kickbacks where inmates would have to pay for even the smallest privileges.

He claimed to have bribed cops to allow him to keep a mobile phone in his police cell immediately following his arrest, and was asked to pay money to three different lawyers offering to help him. One of these lawyers simply took his money and vanished.

Hundreds of dollars were also given to corrupt prison guards — who drank and partied while guarding the inmates — to ensure Mr Brasch and his fellow co-accused were placed in one of the larger jail cells.

“Everything was dealt with in cash — just cash to this person, that person,” he said.

This hellish ordeal continued until February 8, when seven members of the group, including Paul, were released on bail. He said the charges against him were later withdrawn.

After being released he was introduced to a Western man who showed Paul his passport and told him he could get it back if he paid $7000.


“He said you basically need to pay us by Monday or you’re going back to prison. He showed it to me. He kept it in his pocket, it was a bit frustrating,” Mr Brasch said.

He managed to scrape together the cash from his parents and a friend. The man later claimed this money was for lawyers’ fees.

Mr Brasch now hopes to continue living abroad — though is wary of staying in any countries close to Cambodia after the “mentally draining” ordeal.

He believes the charges were ridiculous, adding that photos police released of the so-called pornographic dancing were taken at a completely different event.

The Cambodian embassy in Britain did not respond to The Sun’s request for a comment.

In regards to the British member of the group who remains in jail in Cambodia, a spokesman for the British Foreign Office said: “Our staff continue to assist a British man jailed in Cambodia, and are supporting his family. We are in contact with the Cambodian authorities regarding his case.”

This article originally appeared on The Sun and was reproduced with permission.
Top

Everyday his jailers would taunt the group by joking they were about to be released...

What I find most shocking about this story is the fact that two Sun reporters don't know the difference between 'everyday' and 'every day'.

and had only a hole in the floor in the corner for a toilet. 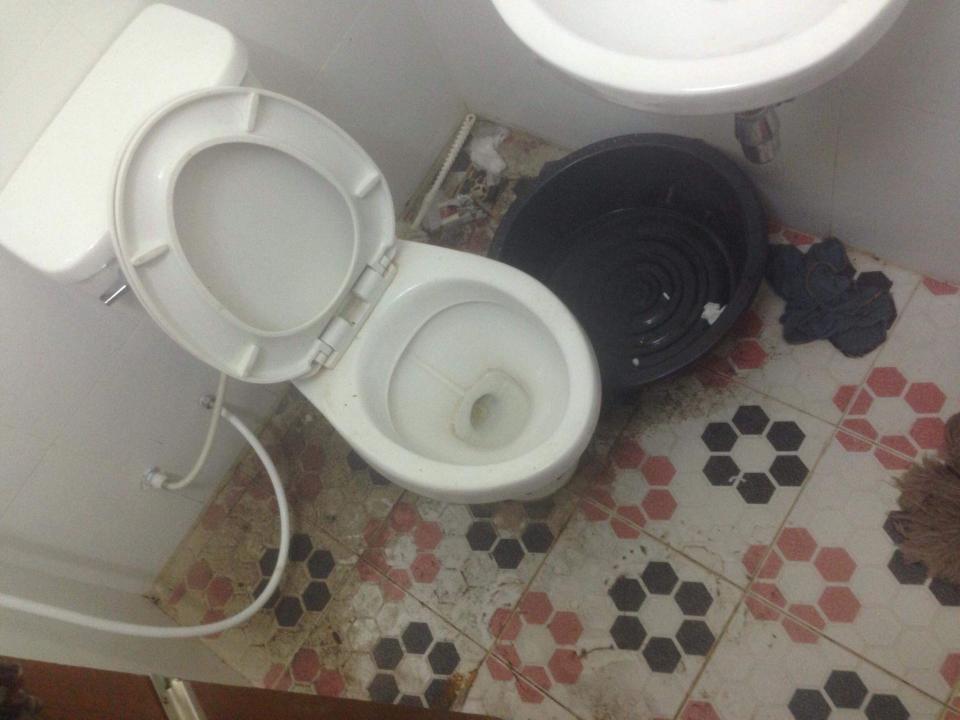 Pictured is the toilet the group shared in their cell

It was so cramped they slept almost on top of one another.

Lucky for them, they weren't charged with pornographic sleeping.
Top

The "water bottles for t-shirts" bit makes no fucking sense whatsoever. ?????
"Life is too important to take seriously."