Three related articles today. Will post the other two in their own threads.

AFTER a year of toothless warnings against below-cost mobile deals – which it previously called suspicious and unfair – Cambodia’s telecommunications regulator has capitulated. Instead, it is beseeching operators to steer clear of confusing marketing and maintain the quality of their services.The Telecommunication Regulator of Cambodia (TRC) will no longer attempt to intervene in what was earlier dubbed an “epic price war” between mobile network operators, it said, explaining that users were benefitting from lower prices. Im Vutha, TRC spokesman, said the situation was under control – even if the same deals persisted – and providing benefits to the public. “If there is a sign that one operator is dominating the market and could potentially lead the market exclusively, we will intervene,” Vutha said, adding that currently all operators were able to run their businesses profitably.

“So far, the lower cost of internet services being provided by telecom operators has been a benefit for other sectors, like payment services, financial services, e-commerce and online shopping,” he said. Early this year, competition between the sector’s bigger players – notably Smart Axiata and CamGSM’s Cellcard – saw the launch of promotional packages allowing subscribers to exchange $1 for more than $100 worth of on-network data, calls and messaging services. The TRC said at the time that the “unfair pricing” was preventing new entrants from being able to cover their costs.

Vutha said the regulator’s priority had turned to increasing public awareness about the possible consequences of a price war. As operators compete on price, Vutha observed, service quality can become poorer. TRC officials had been receiving complaints from the public about poor service, and confusing promotions that have caused subscribers to lose money on their accounts, he said. Chhin Sreynet, a 27-year-old snack vendor in Phnom Penh, said she enjoyed the benefits of the promotional deals, and spent no more than US$5 per month for all her calls and data. “It’s much cheaper than several years ago,” she said. “Now, I don’t need to ask for WiFi passwords when hanging out at shops or restaurants, because the internet package I have is enough.” Teng Sokha, a 55-year-old sugarcane juice vendor, however, said she does not use the internet and had lost money on her account after refilling it because it was connected to a promotion that he had not intended to subscribe to. “Sometimes I refill my account for $5, but I only see $3 left,” he said.

Ian Watson, chief executive officer Cellcard operator CamGSM, said he welcomed the TRC alert, agreeing that it was important to take a holistic view of the market and assess plans and promos on whether they were being communicated transparently. “I can assure you that at Cellcard we do not deduct any balance without the customer subscribing to a service,” he said, adding that if there is any question about subscriptions, users can check with the company’s contact centre to clarify.
Top

TRC are one of the most spineless ministries in this country. 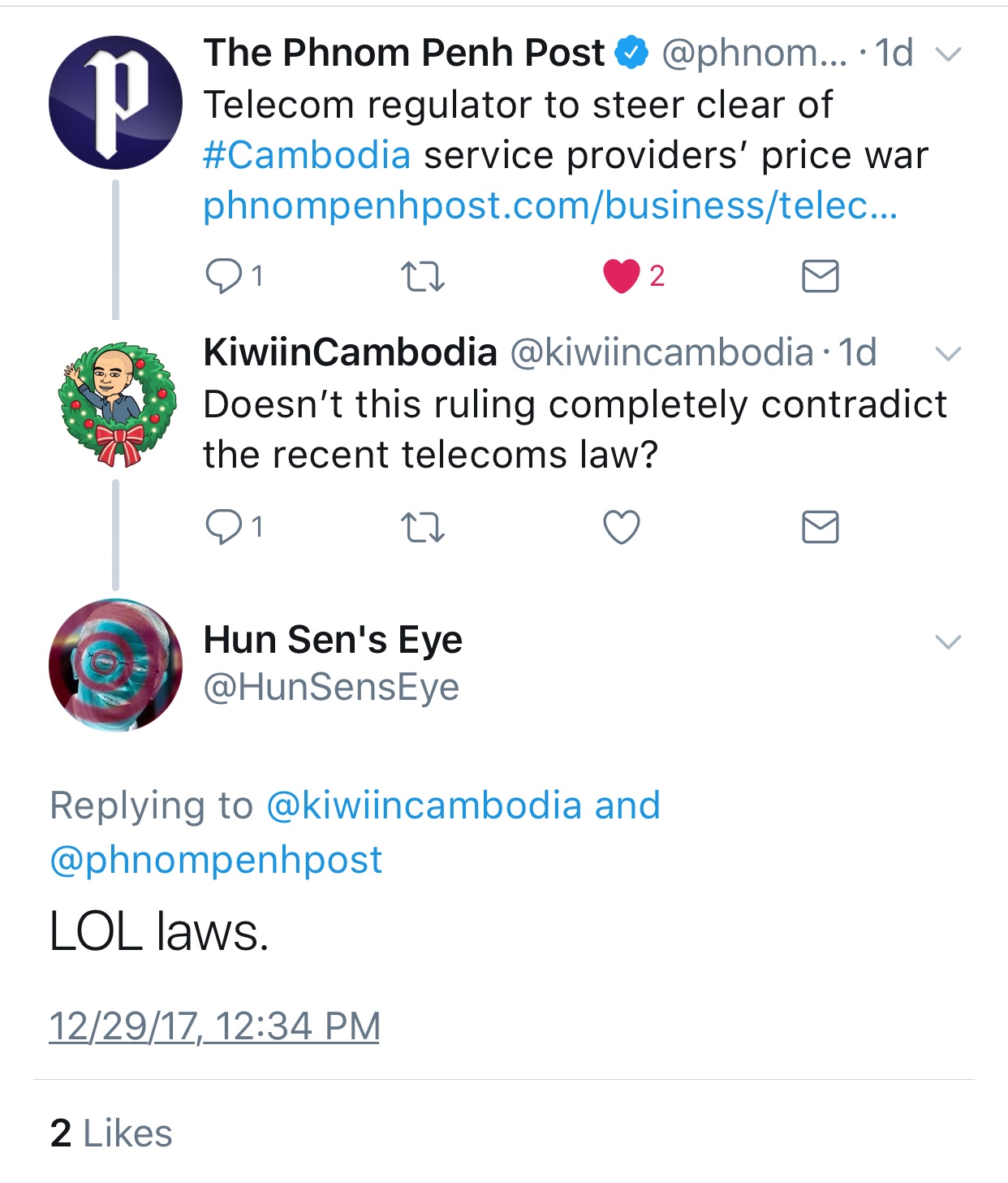 kiwiincambodia wrote: ↑
Sat Dec 30, 2017 3:02 pm
TRC are one of the most spineless ministries in this country.

Not spineless I don't think. More likely connected. Pushing for a monopoly no doubt. You only need two mobile operators to appear to be legitimate.
Top

$2 a week for 10GB data on Smart is pretty damn good. When I'm not away from home $1 for 1GB is more than enough, I barely put a dent in it.

I wish they wouldn't use such meaningless terms as $1=$333 or $1=$500 though. But that's always been the way mobile providers work, obfuscate everything so your plan sounds better, even if it's not.
No matter how much it rains, the dirt never washes away.
Top

kiwiincambodia wrote: ↑
Sat Dec 30, 2017 3:02 pm
TRC are one of the most spineless ministries in this country.

You'd know better than me, but look at the owners of the companies they have to deal with - Cellcard, Smart, Metfone.

Hahaha, after they ignored a directive, I'm sure an appeal with bring results
Top

Yeah, but when you change your $1 for 1 million dollars, don't you have only 7 days to use it all?

Yes it's too bad if you only used half, you can't ask for a $500k refund.
No matter how much it rains, the dirt never washes away.
Top

It doesn't make their plans sound better. It only makes it more difficult for the customers to shop around.
Top

How does a price war make it difficult for customers to shop around?