Have questions or resources regarding Khmer Culture? This forum is all about the Kingdom of Cambodia's culture. Khmer language, Cambodian weddings, French influence, Cambodian architecture, Cambodian politics, Khmer customs, etc? This is the place. Living in Cambodia can cause you to experience a whole new level of culture shock, so feel free to talk about all things related to the Khmer people, and their traditions. And if you want something in Khmer script translated into English, you will probably find what you need.
Post Reply Previous topicNext topic
15 posts

You will be able to see the jewellery that was recently restored to Cambodia as part of a new exhibition that opened today.

Ancient Angkorian jewellery to go on show
4 January 2018
The government will launch a special exhibition of old Khmer jewellery and ornaments, especially a set of ancient Angkorian gold jewellery that has been returned to Cambodia, to let the public see how beautiful these historic items are.

The special exhibition, called “Ancient Khmer Jewelry and Ornaments: Gold and Silver Masterpieces of the Collections of the National Museum of Cambodia”, will be exhibited for one month from January 4 to February 3. 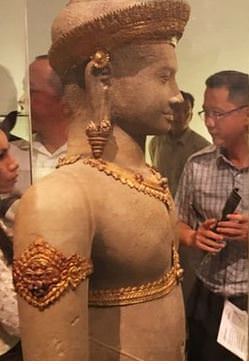 Men Sam An, a Deputy Prime Minister, said at the opening ceremony that this exhibition aimed to exhibit the masterpieces in gold and silver which were produced in ancient times.
“These artifacts underscore Cambodia’s glorious, long-lasting civilisation which was once a past empire in Asia,” she said.

Some of the ancient Angkorian gold jewellery such as necklaces, earrings, crowns, belts and bracelets arrived back in Cambodia on December 2, 2017...
http://www.khmertimeskh.com/50100000/an ... y-go-show/
Cambodia Expats Online: Bringing you breaking news from Cambodia before you read it anywhere else!

Anyone know the entrance fees for the National Museum of Cambodia?
... give 'em a quick, short, sharp shock ...

Angkorian antiquities on show after return from United Kingdom
8 January
The National Museum is currently running a monthlong exhibition of Angkorian jewellery to celebrate the return last month of several gold pieces from the United Kingdom, believed to have been looted from Angkor Wat.

The pieces featured prominently in a book written by two Southeast Asian antiquities experts who are accused by New York district prosecutors of conspiring with a prominent Manhattan art dealer to traffic antiquities.

The dealer, Nancy Wiener, is due to appear in court in New York on February 20. The exhibition runs through February 4.
http://www.phnompenhpost.com/national/a ... ed-kingdom

More on the case of the US antiquity dealers and experts conspiring to sell looted Cambodian relics:
post154561.html?hilit=Nancy%20Wiener#p154561
Cambodia Expats Online: Bringing you breaking news from Cambodia before you read it anywhere else!

Users browsing this forum: No registered users and 47 guests