yes, and they are left alone.
Top 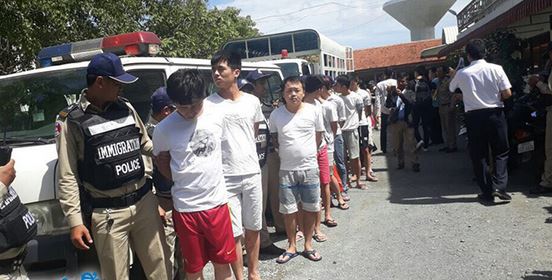 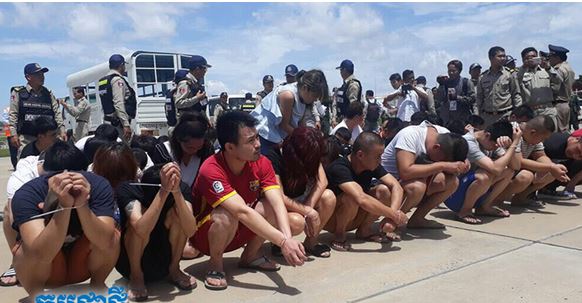 http://kampucheathmey.com/2016/archives/669429
Cambodia Expats Online: Bringing you breaking news from Cambodia before you read it anywhere else!

all fucking deserve it, legally or illegally these fuckers just need to reduce in numbers, the world cant take anymore of their shit

I used to wonder why a friend of mine, who was a Jungian therapist used to say; "beware of the heathen Chinese". After dealing with them, now I know!
Top

The pawns have been deported, but the ringleaders are still at large.

The ring, which extorted people living in China, was operating in Phnom Penh, Kandal and Kampot provinces before the crackdown, which was requested by Chinese authorities. “Many of them had lived in Cambodia for three months, but some had just arrived here a month ago,” Hai Sela said. “All were sent back to Hunan province in mainland China today.”

However, the stings, which came after months of police investigations, have not managed to capture all ring members. “Seven members of the team are still hiding in Cambodia. Three used to operate in Kampot and four in Phnom Penh,” Hai Sela said...
http://www.phnompenhpost.com/national/a ... s-deported
Cambodia Expats Online: Bringing you breaking news from Cambodia before you read it anywhere else!

Scammers use sex to extort victims
7 July 2017
Uk Heisela, director of the Investigation and Procedure Department at the Interior Ministry’s Immigration General Department, said the 74 Chinese nationals were arrested on July 1 in Kampot province and Phnom Penh.

Mr Heisela said this latest scam was different from previous ones because the suspects used pictures of a sexual nature to extort money from people in China.
He said they used women to chat online to male victims. The women showed their naked bodies to the victims, while a third party then threatened to release the conversations and photos to extort money from those targeted.

In the past, fraudsters have used fake police and court documents to extort victims, threatening to kill their families.
“The victims lost between 1,000 and 30,000 yuan ($150 and $4,500) each. Some commit suicide because they are ashamed and have lost everything.”

“The suspects were based in Cambodia but they extorted victims in China. All 74 Chinese nationals come from China’s Hunan province,” Mr Heisela said. Of the 74 suspects, 58 had passports but the rest had entered the country illegally.

http://www.khmertimeskh.com/news/40097/ ... t-victims/
Cambodia Expats Online: Bringing you breaking news from Cambodia before you read it anywhere else!

Yesterday we had no less than 10 immigration officers here in OSoam, chasing Chinese... Don't know if they nabbed any.