Re: Celebrating Anti-Drugs Day in Cambodia

Seen from the USA:

Cambodia Anti Drug Day
By: Heng Sinith, Associated Press
June 26, 2017
Cambodian authorities on Monday torched the drug as part of a campaign to wipe out synthetic drugs recently uncovered in the country. 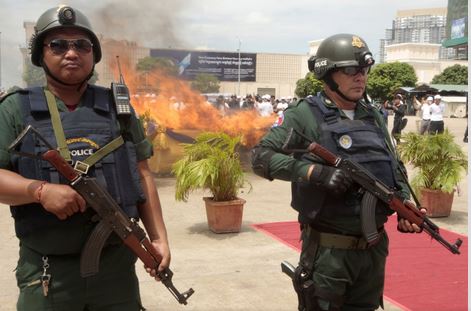 Cambodian police officers stand guard the drug destruction ceremony to mark an International Day against Drug Abuse and Illicit Trafficking , in Phnom Penh, Cambodia, Monday, June 26, 2017. Cambodian authorities on Monday torched the drug as part of a campaign to wipe out synthetic drugs recently uncovered in the country.
http://gazette.com/cambodia-anti-drug-d ... eed/471939
Cambodia Expats Online: Bringing you breaking news from Cambodia before you read it anywhere else!

Re: Celebrating Anti-Drugs Day in Cambodia

Article from SEAGlobe on the Anti-Drug Day burnings in the region:

Drugs go up in smoke, but Southeast Asia’s narcotics problem remains
By: Colin Meyn - POSTED ON: June 26, 2017
Three countries in the region burned more than $1 billion worth of drugs, but addressing the root of the problem has proven far more vexing

A trio of of Southeast Asian countries that are facing disturbing trends in drug use and distribution showcases their efforts to combat the problem yesterday, burning millions of dollars worth of seized narcotics to mark International Day Against Drug Abuse and Illicit Trafficking.

Thailand, Myanmar and Cambodia incinerated a combined $1 billion in drugs on Monday, according to an AFP report.

An estimated $385 million worth of drugs went up in smoke in Myanmar in what police said was a record amount due to rising seizures. Thailand burden some $589 worth of narcotics, including large amounts of methamphetamine, in both pill and crystal form, while Cambodia set fire to about $4 million worth of drugs.

“The burned drugs, including heroin, crystal methamphetamine, methamphetamine pills, ketamine and ecstasy, were seized from criminals in late 2016 and early 2017,” Meas Vyrith, secretary-general of Cambodia’s National Authority for Combating Drugs, told reporters after the ceremony, according to Xinhua. “This reflects our commitment to fighting against the illicit drugs.”

Sirinya Sitthichai, secretary-general of the Thailand’s Office of Narcotics Control Board, also told reporters that the seized drugs were a sign of success. “Currently, we are able to take down a lot of networks, including … transnational networks bringing drugs into Thailand,” he said, according to Reuters.

Countries including Cambodia have also launched high-profile initiatives to combat rising drug use and trafficking, through it remains unclear if these efforts are reducing drug abuse and sales or simply leading to a rise in arrests and seizures...
http://sea-globe.com/drugs-go-smoke-sou ... m-remains/
Top
Post Reply Previous topicNext topic
12 posts