Do you have a Cambodian trip report you want to share? Post it here, and feel free to link to your blog if it's a travel blog for Cambodia, South East Asia, or anywhere really. You can ask and answer questions about travel advice in Cambodia or just share your pictures and videos with us. Most people who live in or visit Cambodia have also checked out nearby countries like Vietnam, Thailand, Laos, Myanmar, Malaysia, Indonesia and the Philippines, and you can get to most of these countries by traveling overland, so put any travel plans, reviews or questions here. Discussions about dirt bike trails in here as well.
Post Reply Previous topicNext topic
11 posts

Officials at the State Secretariat of Civil Aviation (SSCA) told the Post in February that the Philippine Embassy in Phnom Penh had requested permission for Philippine Airlines (PAL) to operate a direct flight between Manila and either Phnom Penh or Siem Reap.

SSCA spokesman Sinn Chanserey Vutha said yesterday that a deal had not been reached due to Vietnam refusing to grant PAL fifth-freedom rights, which allow airlines to pick up passengers during layovers in a country while travelling from their home country to another foreign country.

“Philippine Airlines has not yet started operating flights to Cambodia because, I heard, they were seeking the fifth freedom of the air from Vietnam, but it was rejected,” he said. “They are still considering a direct flight to Cambodia, but have suspended the plan due to the limited opportunity for profit.”

Philippine low-cost carrier (LCC) Cebu Pacific has operated up to four flights between Manila and Siem Reap since 2012. There is no direct flight between the two countries’ capitals.
http://www.phnompenhpost.com/business/d ... ck-layover
Cambodia Expats Online: Bringing you breaking news from Cambodia before you read it anywhere else!

The problems have been resolved and PAL start direct flights betwen Manila and Phnom Penh on 1 April 2019.

Philippine Airlines launches more flights to Cambodia, Vietnam
The Philippine flag carrier will launch flights from Manila to Phnom Penh in Cambodia and Hanoi in Vietnam this summer
January 08, 2019 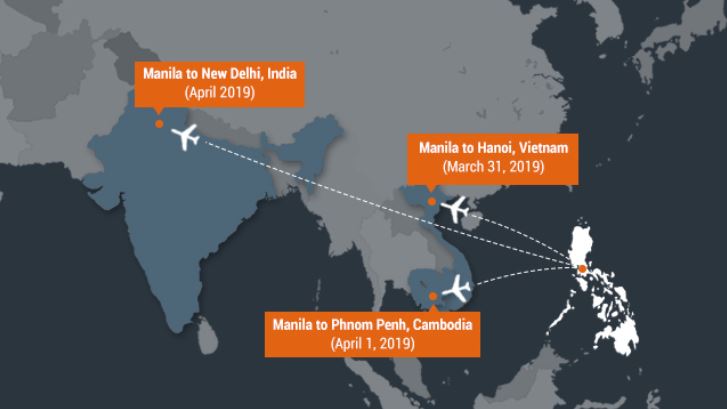 In a media briefing Tuesday, January 8, PAL President Jaime Bautista announced that the airline will be expanding its flight services to Phnom Penh in Cambodia and Hanoi in Vietnam.

"Philippine Airlines' strategic vision is to make the Philippines a true gateway to Asia…. We will leverage Manila's excellent geographical location as an ideal stopover point for people flying to Southeast and South Asia from the east and west coasts of North America," Bautista said.

New routes: Flights to Hanoi will be operational 4 times weekly, once every Monday, Wednesday, Friday, and Sunday. The first flight on March 31 will depart at 10:25 pm, while the return flight will arrive in Manila 5:30 am the following day.

Meanwhile, PAL will have 5 flights to Phnom Penh weekly – Monday, Tuesday, Thursday, Friday, and Saturday. Starting April 1, flights will depart from Manila at 10:10 pm and arrive at Phnom Penh at 11:45 pm.
https://www.rappler.com/business/220522 ... ia-vietnam
Cambodia Expats Online: Bringing you breaking news from Cambodia before you read it anywhere else!

Now if only they can stop customs officials from planting bullets in passenger luggage in order to extort money.
Top

Mr Bautista or, better, his PR person should start thinking before opening their mouths. it is deeply insulting to Vietnamese to claim that their history or culture is based in French imperialist domination.
The Cham were much older than the Khmer and the old Cham temples and the other remains documenting the beginnings of Hinduism in the region are impressive. The Khmer temples n the South have nothing to do with France. Hill tribes have their own history. 19th century Hue is not French. And the temple of literature was there when the French were still unfamiliar with the use of toilets as where most other Europeans.

Thank the gods of the Philippine Islands that Bautista did not say anything about Vietnamese food.

As for Cambodia, I m not sure that much will change for most expats here. The ticket prices of PAL are significantly higher than Cebu Pacific or Air Asia. Often more than double. Thus, the Siem Reap and HCMC flights to Manila will remain a good alternative as long as money is a concern and time not so much. PAL customers also have to put up with Manila Terminal 2 plus the taxi mafia outside. Air Asia uses the old Terminal 4 which makes pre-world war 2 memories come alive. CebuP uses T 3 which the newest and has the best local transport infrastructure.
PAL is also less than helpful with its checked luggage policy. After the first 20 kgs prices go up by the kg. CebuP has several packages. On the other hand, they dont have an excess baggage price by the kg. They hit you with a hefty bill starting from the first 1 kg.

Edit: I did a random online search for prices from Hanoi to Manila. Prices from Hanoi differed by 115 USD (no luggage included on CebuP) and flight times were in both cases for people who like sleeping on planes.
The PNH to MNL prices for almost triple on PAL. Some business guys or people with connecting long distance on PAL out of Manila might pick that flight. I m happy with my 60 USD airfares althought they do involve time on buses.
Top

Is the date significant?
Bodge: This ain't Kansas, and the neighbours ate Toto!
Top

Shitty flying times but this will save a lot of time with layovers etc. Will benefit a couple of my friends and no doubt others who like to combine their Cambo and PI trips.
Top

hoping cebupacific will also have in phnom penh airport
Top

Difficulties in turning out a profit was the main reason for Cebu Pacific’s departure from the Kingdom, according to Philippine media reports last week. Cebu Pacific ended its Siem Reap flights yesterday.

Cebu Pacific spokesperson Charo Logarta-Lagamon was quoted as saying by Philippine Star that “route viability became a concern” for its Siem Reap service.

The reports confirmed rumors that have been circulating as far as back last year that the Gokongwei-owned airline was contemplating such a move.

The difficulties faced by Cebu Pacific were also a topic of discussion among Filipinos who attended the 3rd Cambodia Travel Mart.

Then last week, Dirk Salcedo, an aviation blogger based out of the Philippines, reported that closure of the route was imminent, citing its online booking platform and data from FlightRadar24.com that show no Cebu Pacific flights beyond Dec 7.

The news saddened many Filipinos in Cambodia. The Kingdom is host to more than 6,000 Filipino nationals.

The thousands of Filipinos working and residing in Cambodia also factored in Cebu Pacific’s decision to establish a direct flight to Siem Reap, becoming the first such carrier from the Philippines to do so.

Since then, the airline has been flying three times a week from Manila to Siem Reap and vice versa using an Airbus A-320 aircraft.

A few other Philippine carriers like Royal Air Philippines operate charter flights servicing the Cambodia route.
https://www.khmertimeskh.com/50668252/p ... siem-reap/
Cambodia Expats Online: Bringing you breaking news from Cambodia before you read it anywhere else!

The cancellation of the service was obvious for the past months. Since July CP flights for December had been priced at 450 USD one way, base fare. The flights were usually 3/4 full or more.
The real reason for the cancellation is CP shift to the China market with an ever increasing number of services. It will be interesting to see if the SGN route will remain. For PP dwellers the CP's SGN service is a viable alternative, at least outbound. It would be nice if Vietjet would start MNL flights. Lower fares, much better service, and less hassle.
Top
Post Reply Previous topicNext topic
11 posts