Do you have a Cambodian trip report you want to share? Post it here, and feel free to link to your blog if it's a travel blog for Cambodia, South East Asia, or anywhere really. You can ask and answer questions about travel advice in Cambodia or just share your pictures and videos with us. Most people who live in or visit Cambodia have also checked out nearby countries like Vietnam, Thailand, Laos, Myanmar, Malaysia, Indonesia and the Philippines, and you can get to most of these countries by traveling overland, so put any travel plans, reviews or questions here. Discussions about dirt bike trails in here as well.
Post Reply Previous topicNext topic
455 posts

ATTENTION: Latest reports from social media say that if you arrive in Vietnam from South Korea you will be automatically locked up in quarantine for 14 days. You may want to reconsider your travel plans.


** ANYONE TRAVELLING FROM KOREA TO VIETNAM **

Flights arriving in Vietnam from Korea are being forced into mandatory 14 day quarantine. The passengers didn't know this until they arrived, total surprise. Because quarantine facilities are full, they're sleeping in the airport, and only given a small sandwich to eat.

Pretty messed up situation, and shameful that these flights haven't been cancelled!! Make sure you are keeping up to date and researching travel restrictions, because you might not know. 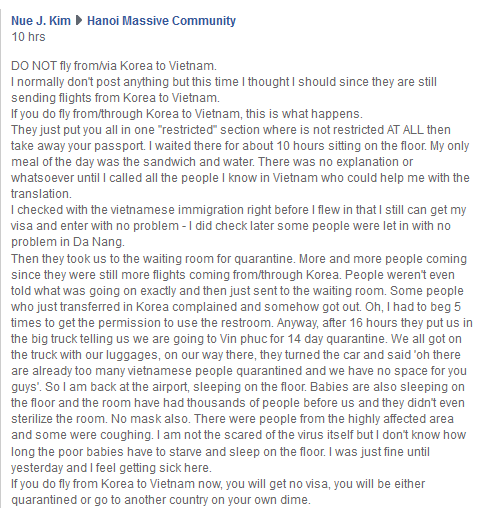 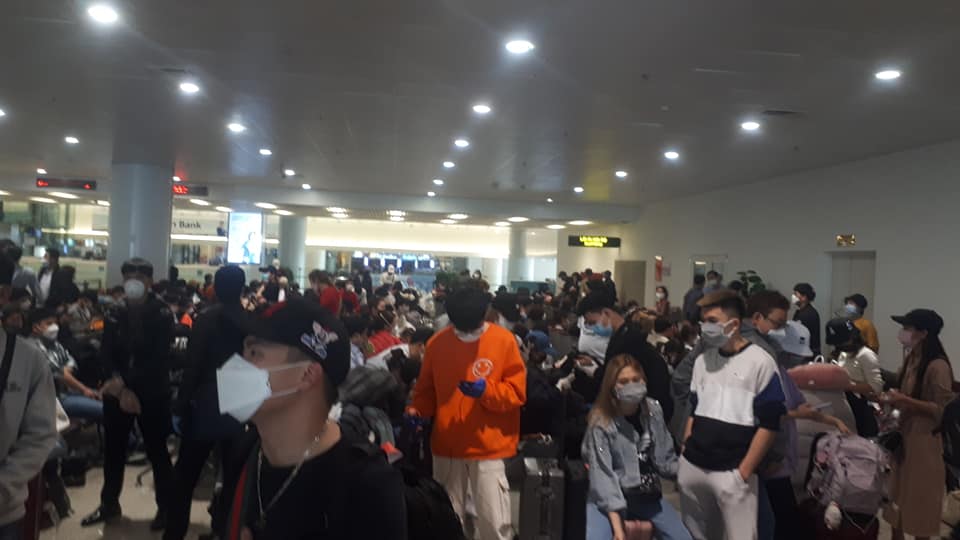 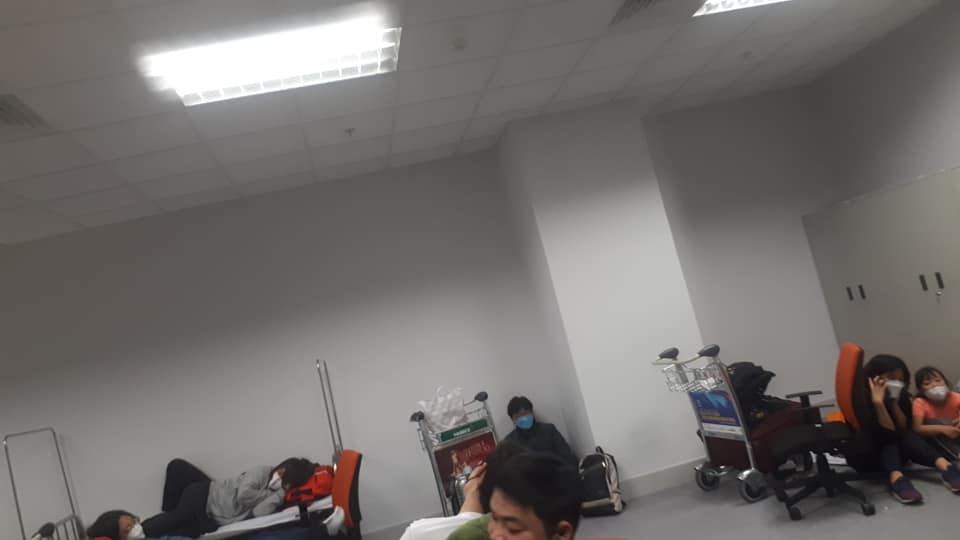 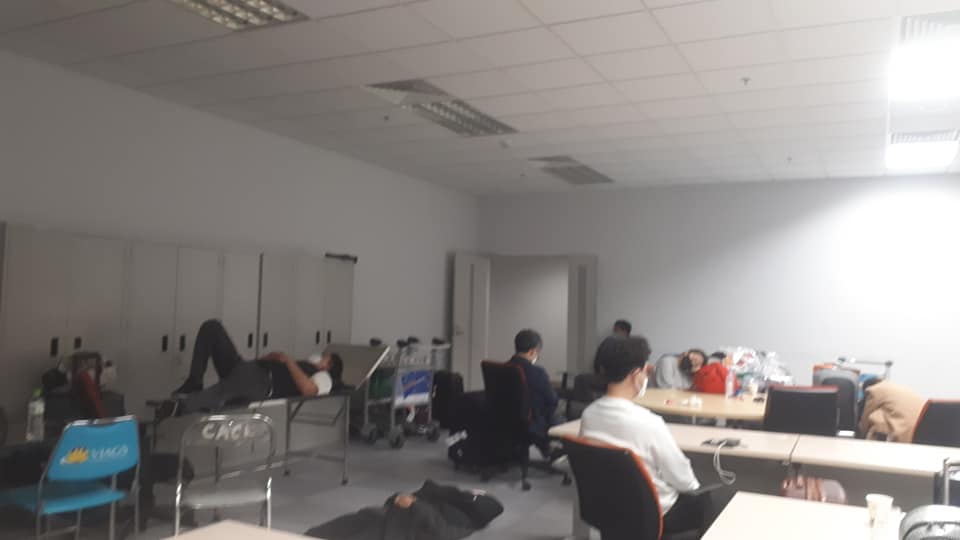 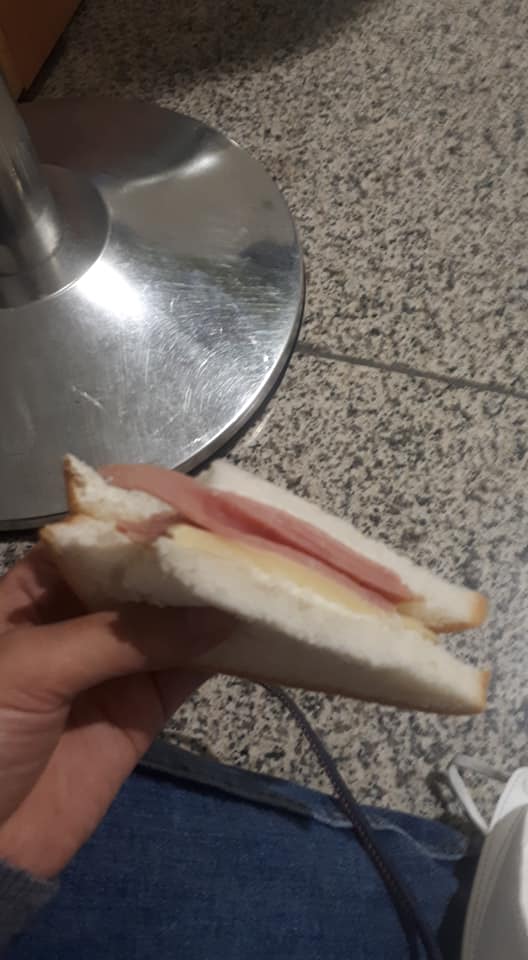 Follow the money.
JP Morgan Chase said it is “restricting all international travel to essential travel only,” due to the continued spread of the virus
https://www.reuters.com/article/us-jp-m ... SKCN20M0EX
along with a growing list of other Fortune 500's.

Flights are being slashed to South Korean destinations:

According to a report in the Laotian Times, the airline said recent flights were “empty from Seoul to Vientiane while many South Koreans have stopped travelling overseas.”

On the plus side, Lao Airlines will add a new service from Vientiane to Danang in central Vietnam from 29 March using the 70-seat ATR72.

Vietnam’s Bamboo Airways has cancelled flights to Seoul from Cam Ranh and Danang in central Vietnam effective from 26 February to 28 March.

The airline has also cut services to Daegu, South Korea, where the coronavirus is rapidly spreading.

Asiana Airlines reduces flights from Seoul to Thailand and Vietnam and suspends flights to Daegu that has the highest reported cases of Covid-19 in South Korea.

Vietnam Airlines cuts services from Hanoi to Seoul, but other services out of Ho Chi Minh city remain intact.

Korean Air suspends all flights to Daegu from Jeju and Seoul. The national carrier has cut services to Taipei, Taiwan.
https://www.ttrweekly.com/site/2020/02/ ... ts-falter/
Cambodia Expats Online: Bringing you breaking news from Cambodia before you read it anywhere else!

Is there any way to combine all the Carona threads?
Once you've read the dictionary, every other book is just a remix.
Top

Having a travel thread for coronavirus is handy as it saves people time from trawling through a 100+ page thread looking for specific information.
Keep your money in your socks and fuck, and get massaged, with your socks on

As the coronavirus outbreak continues to spread, the Foreign and Commonwealth Office is publishing regular updates for those planning to travel abroad.
As of February 29 at 9am, a total of 10,483 people have been tested for the illness in the UK, of which 10,460 were confirmed negative and 23 positive.

This was posted elsewhere: Mandatory health checks at the border to enter Vietnam from Cambodia and Laos.
the-road/mandatory-health-checks-enter- ... 36257.html
Cambodia Expats Online: Bringing you breaking news from Cambodia before you read it anywhere else!

Thailand authorities have decided that visitors arriving from France and Germany are high risk for COVID-19. However, Cambodia, Myanmar, Malaysia, Indonesia and Laos are not on the radar, due to the low numbers of infections officially reported. 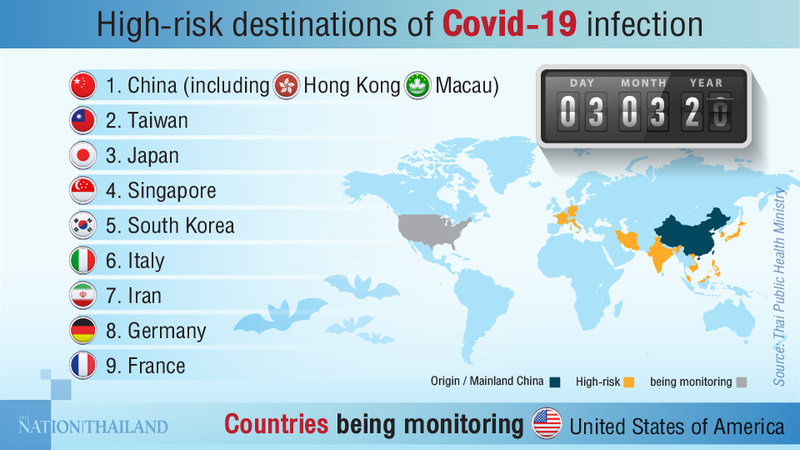 Thailand’s Public Health Ministry, via a ministerial announcement, has designated nine countries and two territories as high risk areas for COVID-19, and visitors to Thailand from these areas will be subject to 14-day home quarantine and will have to adhere to health related follow-up measures.

The nine countries, defined by Thailand as “high risk”, are Japan, South Korea, Germany, China, Taiwan, France, Singapore, Italy and Iran, and the two territories are Macau and Hong Kong.

Visitors and Thai citizens returning from the high risk areas will be subject to 14-days home quarantine, even if they are cleared of the disease, unless they have permission from health officials.

Those who do not have a permanent residence or lodging in Thailand are required to show officials, upon arrival, evidence of where officials can locate them during the 14-day period.

Those who have flu-like symptoms upon their arrival, such as a body temperature exceeding 37.5oC, a runny nose, sore throat or breathing difficulties, will be sent to state hospitals for further testing, treatment or quarantine, depending on the seriousness of the illness.

For those who cannot produce evidence of a formal lodging, such as a hotel or hostel, during their visit in Thailand, immigration officials are authorized to send them back home or to allow them entry subject to 14-days of self-quarantine.

Foreign visitors or Thai returnees from the high risk areas are required to file a daily report on their health with designated health officials during the quarantine period and, if they become unwell or suspect they may be sick, they must inform health officials within three hours so that they can undergo further testing, receive treatment or be isolated.

All the medical expenses incurred will be borne by the individuals themselves.
Cambodia Expats Online: Bringing you breaking news from Cambodia before you read it anywhere else!

Why are they allowed to travel if coming from suspected county's and some may have already transited though another airport.
If I unknowingly end up sharing a flight with these people can I claim compensation from the airlines or airport for related costs if I need to isolate myself and medical costs as it's the airlines that have put me at risk .
I'm standing up, so I must be straight
What's a poor man do when the blues keep following him around.
Top

What exactly is isolating oneself , staying in hotel getting takeaways?
I'm standing up, so I must be straight
What's a poor man do when the blues keep following him around.
Top
Post Reply Previous topicNext topic
455 posts