Do you have a Cambodian trip report you want to share? Post it here, and feel free to link to your blog if it's a travel blog for Cambodia, South East Asia, or anywhere really. You can ask and answer questions about travel advice in Cambodia or just share your pictures and videos with us. Most people who live in or visit Cambodia have also checked out nearby countries like Vietnam, Thailand, Laos, Myanmar, Malaysia, Indonesia and the Philippines, and you can get to most of these countries by traveling overland, so put any travel plans, reviews or questions here. Discussions about dirt bike trails in here as well.
Post Reply Previous topicNext topic
22 posts

When I heard that the newly opened Mikkeller bar in Bangkok had the famous Beer Geek Vanilla Shake on bottle for sale (rated 100/100 on ratebeer and 95/100 on beeradvocate - It's an Imperial Stout brewed with coffee and vanilla. ABV:13%), I decided I had to get my ass over there ASAP and get my hands on a bottle.. and while I was there, try as many of the other Mikkeller beers they had on their 30 (rotating) taps.

I managed to get a really cheap round-trip ticket to Bangkok with Airasia, but had only 14 hours in Bangkok and as the curfew was from 22.00 to 05.00, I had a maximum of 5 to 6 hours total inside the bar itself.

The bar is way out of the tourist area and you'll never stumble on to the place just because you were in the area.. It's close enough to Sukhumvit, but it's in what looks to be a posh residential area off Sukhumvit on Ekkamai Soi 10, Yaek 2.

It's a really nice looking place located in a very quiet area. Even the motorcycle taxi had difficulty finding the place. 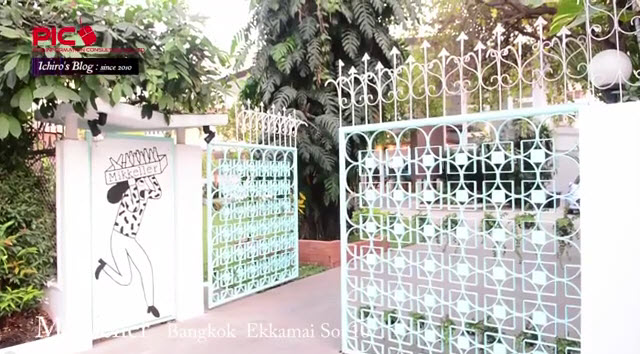 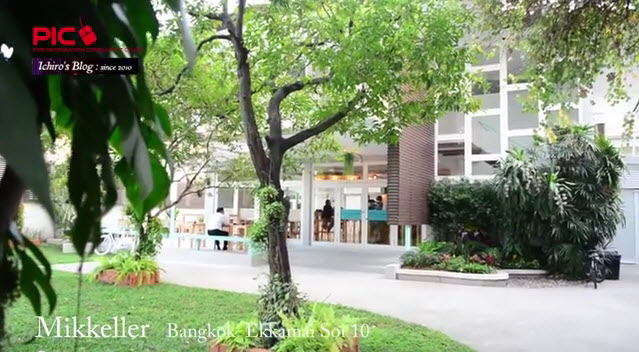 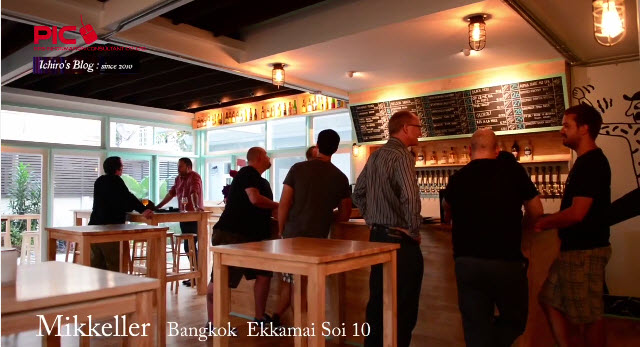 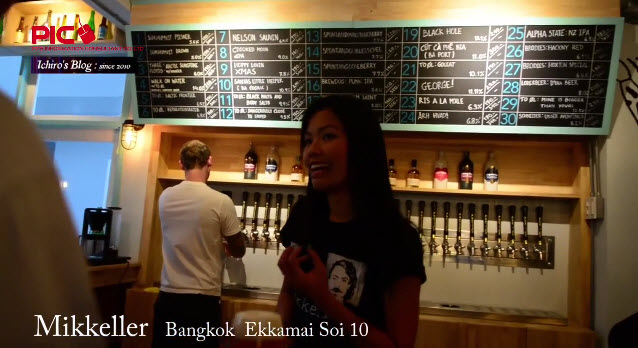 Bar with 30 taps. Prices from about 150 to 440 baht (when I was there) for small / big glass depending on which beer you choose. (pic from youtube) 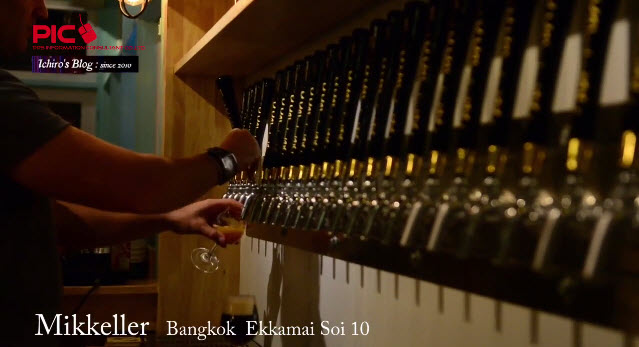 Rotating taps. From what I understand, most of the beers are constantly replaced when empty. They have only a couple of regulars. (pic from youtube) 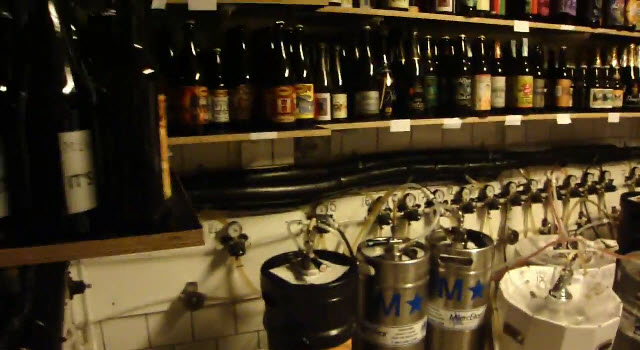 They keep all their beers refridgerated at all times like they do in the Mikkeller bar in Copenhagen where this picture was taken. Most of the beers they sell on tap in Bangkok is brewed in Belgium. The bottled beers are brewed in several different countries. (Mikkeller is a "gypsy brewer". He has no brewery, and brews all his beers in different breweries all over the world.)

I was a little disappointed that none of the beers are brewed in the region, but maybe that will change over time.

There's a huge variety of beers on tap ranging from pilsners to lambics to fruit beers to stouts to IPA's, etc. Pretty much any type of beer you could want. I was also disappointed that they don't know/ wont tell you what hops have been used in the different beers, but I can live with that. Just have to try them all I guess

This is what they had on tap when I was there in late May : 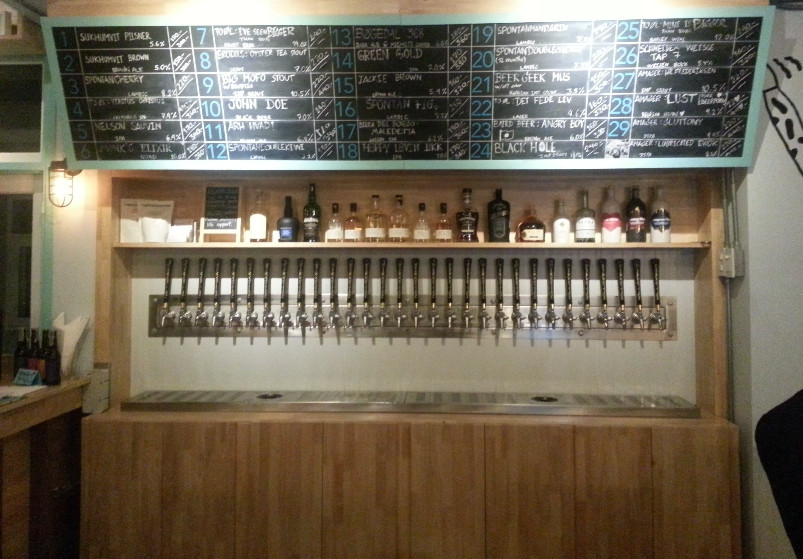 I started off with Nr.1 : Sukhumvit Pilsner 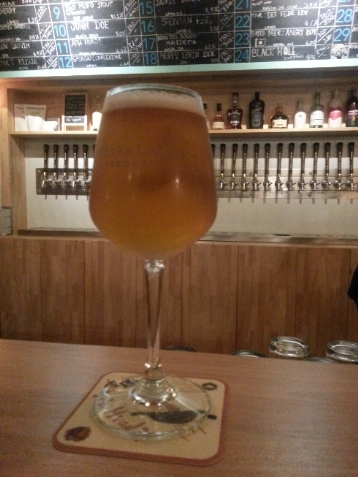 It was more an IPL than a pilsner, but I really liked it. And at 5.6%, you could drink this all day. 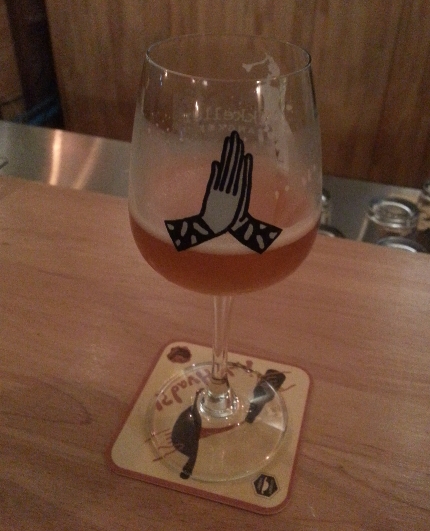 After that I ordered some snacks.. "to take the edge off" as they so nicely put it on the menu 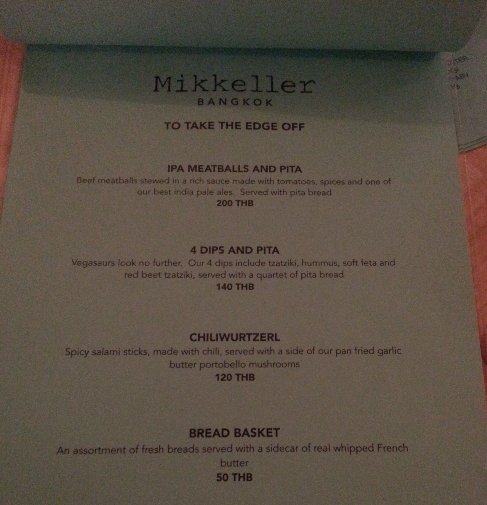 I had been drinking since entering the airport in Phnom Penh so I needed something to eat. I ended up getting everything on this page of the menu, and the IPA meatballs was my favourite. Great tasting meatballs in a flavourful sauce. Served with pita bread. It really hit the spot.. 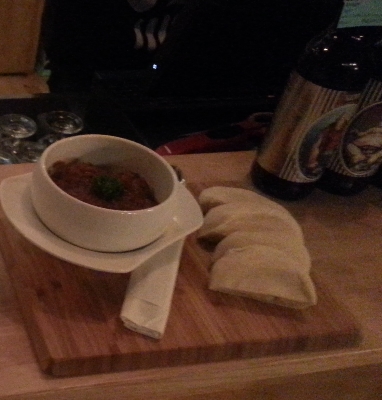 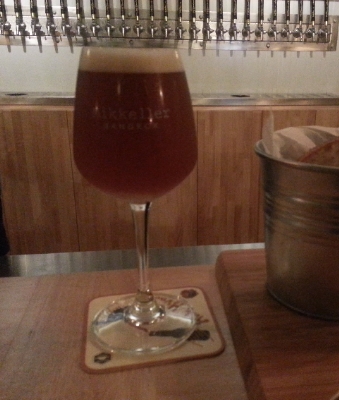 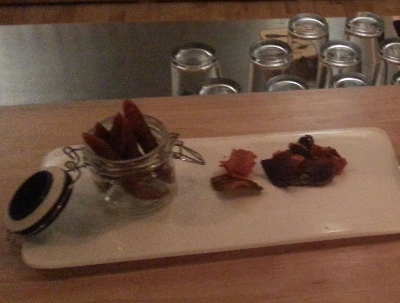 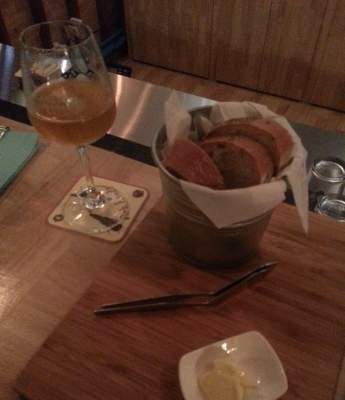 Breadbasket and the Sukhumvit pilsner

And the reason I came : 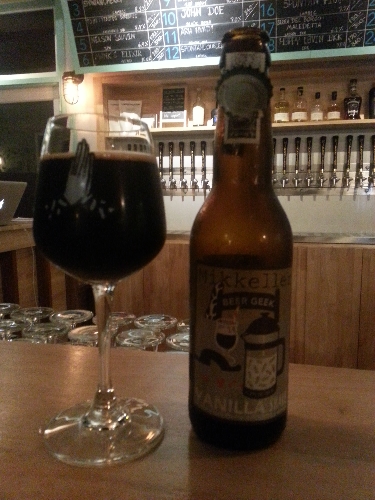 Mikkeller's Beer Geek Vanilla Shake. This cost about 600 baht, but was worth every satang. A great stout.. at 13% I'm surprised that I couldn't even taste the alcohol. As easy to drink as any other stout. Not as much vanilla flavour as I'd thought though..

They're only selling 3 of these a day now, so I'm happy I got one while I had the chance.

They started closing around 22.00.. 22.30 which suited me fine as I was going back to PP very early the next morning. 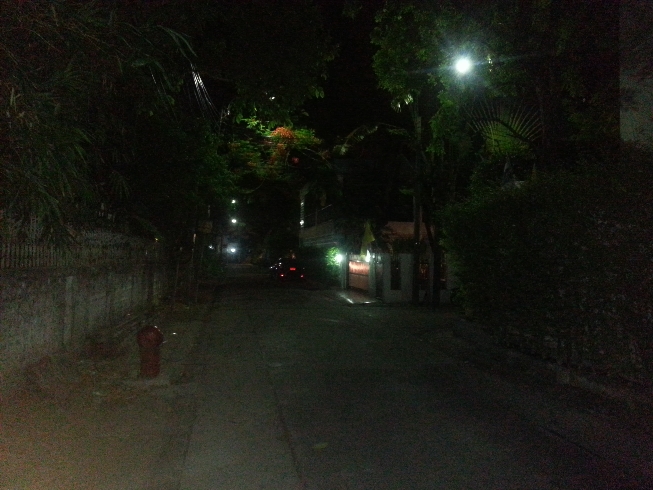 You'll have to walk 3-5 minutes up to Ekkamai soi 10 to get a cab as the area around the bar is very quiet, with little to no traffic.

This is most likely THE best craft beer bar in Asia with the biggest selection of top class beers/ales/stouts, etc.. Mikkeller is known worldwide for his great beers and I personally haven't had one bad beer from him yet. His beers are consistently getting great reviews all over the world.

If you're into craft beer and you aren't afraid to pay for quality.. This is THE place to go in Asia IMO.

http://mikkellerbangkok.com/
Alcohol is necessary so that a man can have a good opinion of himself, undisturbed by the facts
Top

Which soi is ekkamai? Is that near Thong Lor? I always stay up that end nowadays.

Satiated Parrot wrote:Which soi is ekkamai? Is that near Thong Lor? I always stay up that end nowadays.

It's the street just before Ekkamai BTS station. Which is the station after Thong Lor.. 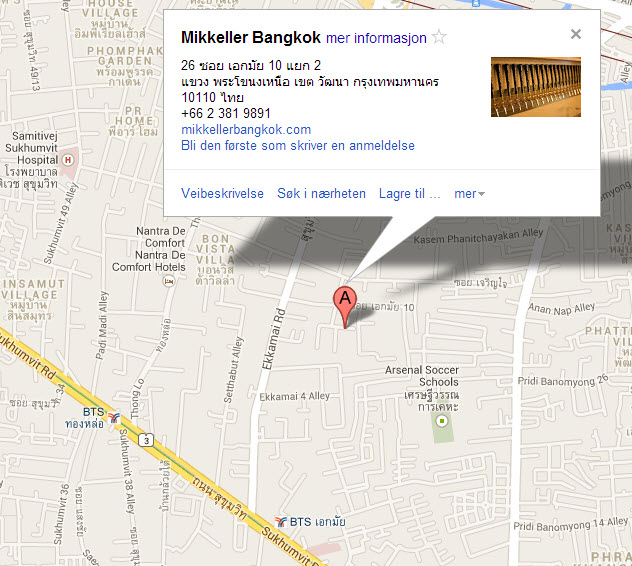 I will be checking this place out on my next visit to Bangkok.
Top

How long will those beers at the taps stay fresh? I've been to bars with a hundred different taps, but my guess is that many of those taps don't get used much or at all, meaning that beer is quite old.
Top

Gotta respect a man who jumps on a plane to get beer!
The idea that seeing the world is going from place to place to look at obvious things is an illusion natural to dull minds.
Top

Soi Dog wrote:How long will those beers at the taps stay fresh? I've been to bars with a hundred different taps, but my guess is that many of those taps don't get used much or at all, meaning that beer is quite old.

Mikkeller uses 25 or 30 liter kegs AFAIK, so the chance that any of the beers will get old is microscopical.. I'd worry more about the treatment these kegs get during shipping from Belgium. If they are sitting around in extreme heat for weeks on end, they will eventually go bad. Worst case scenario is that the ales will loose their hoppyness and could also become oxidized.. giving them a really bitter, off taste. (..a bad kind of bitter btw, not the good kind of bitter you get from an IPA!

) But for all I know they are shipping the kegs in refridgerated containers. That would be the optimal way to do it (but considerably more expensive I'd assume).

An IPA will stay fresh for at least a couple of months.. Stouts much, much longer. I doubt any of the kegs will last longer than a month though as they're so small.

Anyway.. I had 10+ different beers and all were very fresh tasting with no signs of staleness.

Kung-fu Hillbilly wrote:Gotta respect a man who jumps on a plane to get beer!

Nice review, will definately look this place up on my next visit.
The cedar roasted asparagus has good chew. I don't know how to enjoy it, so I'll Instagram it instead.
Top

FreeSocrates! wrote:Nice review, will definately look this place up on my next visit.

Looks like a bit of a farang sausage fest in there.
Top
Post Reply Previous topicNext topic
22 posts

Users browsing this forum: No registered users and 130 guests