Easy trips from Cambodia to...

Do you have a Cambodian trip report you want to share? Post it here, and feel free to link to your blog if it's a travel blog for Cambodia, South East Asia, or anywhere really. You can ask and answer questions about travel advice in Cambodia or just share your pictures and videos with us. Most people who live in or visit Cambodia have also checked out nearby countries like Vietnam, Thailand, Laos, Myanmar, Malaysia, Indonesia and the Philippines, and you can get to most of these countries by traveling overland, so put any travel plans, reviews or questions here. Discussions about dirt bike trails in here as well.
Post Reply Previous topicNext topic
44 posts

Singapore. Under $200. round trip on Tiger Air, great/cheap subway, shop till you drop, 11 Popeye's chicken outlets, the only Mexican food store I know of in SEA, Universal Studio, real T-bone steaks, every store you can ever think of. Four-floors-of-whores over on Orchard Road (Orchard Towers), McDs everywhere, spotlessly clean city (what a change after Phnom Penh.)

Lodging can be a little expensive, but with planning not to bad. I stay at the Singapore Mariners Club on Cantiment Road for $80.us (complete apartment) since I still have my Mariners documents. (two blocks from Outram Park MRT.) Try to get a place close to an MRT station.

Probibly the best looking girls/women I have ever seen. Its kind of embarrassing getting caught staring at good looking ladys while you ride the subway and they all seem to be dressed in designer clothes. Neck whiplash while walking down the streets also.

The mall on Orchard road (Lucky Plaza) where all the Filipino maid hang out at on Sunday has a good/cheap food court in the basement.

Number one airport in the world. MRT runs from the airport to all over town (cheap). One of those plastic folding maps is real helpful (Monument Books in PP has them.)
Top

Unless ur staying in the Geylang ( full of short time hotels) ur going to pay at least $100/night
except for food courts food much more expensive thnan back home. ( well of course, its a 1st world country)

Transport is cheap but thats its.
a once trip is great an the ladies/kids love Sentosa but u better check your credit limit on your credit card
In a nation run by swine, all pigs are upward-mobile and the rest of us are fucked until we can put our acts together: not necessarily to win, but mainly to keep from losing completely. HST
Top

There are many other areas to stay at the economy end beside geylang. Even though I get a special deal near Chinatown I did the research and for the same price could get a basic room elsewhere. Yes, Singapore is expensive, but so is London, Paris, New York, etc. For a "special" trip, its wonderful. You can actually buy things there, the streets are safe even at night and there are shopping malls everywhere. I believe they have one of the best Zoos in the world and like I said the airport was voted number one in the worl
Top

What are average prices for hotels in Singapore then? 50$/night? How much in that Geyland area? Say, what's the cheapest hostel around? And what's an average "cheap" small hotel room in a decent location cost?
Ex Bitteeinbit/LexusSchmexus
Top

Bitte_Kein_Lexus wrote:What are average prices for hotels in Singapore then? 50$/night? How much in that Geyland area? Say, what's the cheapest hostel around? And what's an average "cheap" small hotel room in a decent location cost?

$50 would not be an average price, quite a bit higher. My recent trip I paid $49 including tax for a decent place in Geylang:

I previously stayed in a $40 hotel which was horrible.
Using Tapatalk
Top

Thanks! That looks pretty nice and I doubt it gets much cheaper in Singapore. I have a feeling I'd hate it, but keep thinking I should at least go for a few nights to check it out...
Ex Bitteeinbit/LexusSchmexus
Top

Check out bookings.com
we spent $125 us for the Ibis hotel on Bencollen street,
I used to go every few months when my daughter was younger an stay at the Sentosa Shangra la resort ( back then it was $150/night)
now its like $300!!!

I really enjoy Singapore and my Cambodian gf loved it as well ( so CLEAN she said)
In a nation run by swine, all pigs are upward-mobile and the rest of us are fucked until we can put our acts together: not necessarily to win, but mainly to keep from losing completely. HST
Top

if I were actually in Siem Reap right now, I would consider something like hipmunk. A nice trip that utilizes the "boutique" routes that Vietnam Airlines operates in Indochina and at a fairly reasonable price too.
Top

Absolutely.. I just did a quick check to make sure.. Looks like there's a good chance the hydrofoils boats may never return. The ban is still on. 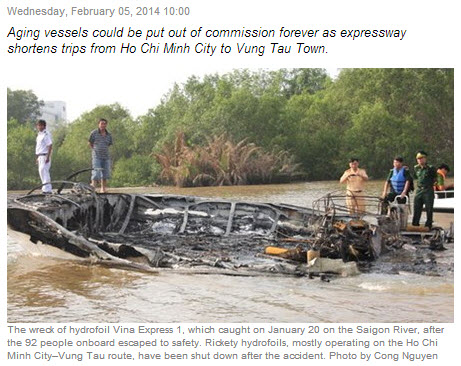 Old hydrofoils may be scrapped

The move was made after safety inspections between February 27 and March 22 revealed a total of 258 faults on eight of the 10 vessels. This included technical faults in the cockpits, cabins and engines.

Minister Dinh La Thang said the faults posed a high risk of accidents, including fires, due to shortcomings in the vessels' engine and power systems.

He said the problems could only be temporarily fixed as most of the vessels had been operating for more than 20 years and had been repaired many times.

In January this year, a hydrofoil burst into flames while carrying 85 passengers from HCM City to Ba Ria-Vung Tau province. No casualties occurred but the vessel's cabin and engine room were destroyed.

HCM City authorities later suspended operation of all hydrofoils in the city until checks were made.

Thang proposed the Government issue a decree banning the use of high-speed tourist vessels after 20 years' use.

In an earlier move to ensure passenger safety, the transport ministry has also suspended the operation of all hydrofoils operating on one motor. â€” VNS