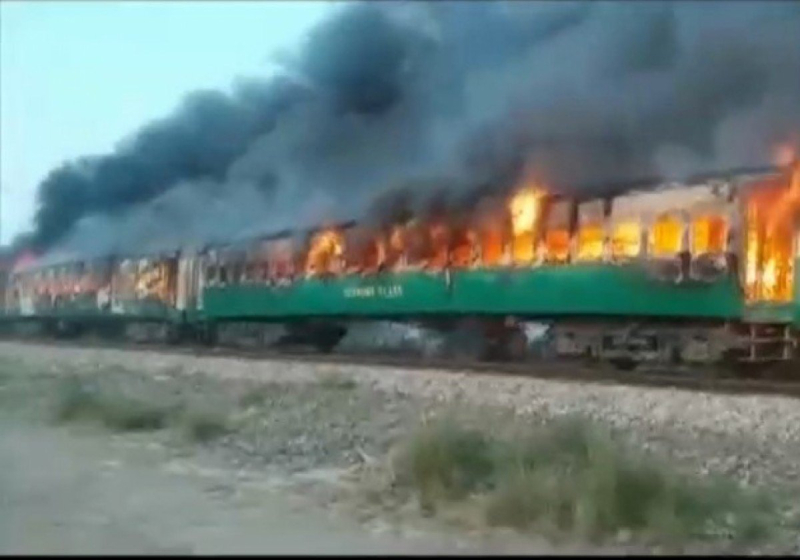 At least 71 people were killed and dozens wounded after cooking gas cylinders exploded on a train packed with religious pilgrims in central Pakistan on Thursday, a provincial minister said.

Television footage showed flames pouring out of three carriages as people could be heard crying in the incident, in a rural area of central Punjab province.

Some of the passengers - many of whom were religious pilgrims travelling to a congregation in the eastern city of Lahore - had been cooking breakfast when two of their gas cylinders exploded, said Ali Nawaz, a senior Pakistan Railways official.

Many Pakistanis carry food on long train journeys, but gas cylinders are banned, and Nawaz said an inquiry had been ordered.

Dozens of people were crowded onto the tracks staring at the burning carriages, which had been disconnected from the rest of the train, television images showed.

Firefighters later rushed to the scene near Rahim Yar Khan district, extinguishing the blaze. Rescue workers and the army could also be seen, as bodies were carried away covered in white sheets.

Provincial health minister Yasmin Rashid initially said more than 65 people were killed and over 40 injured, but this estimate was later raised by Kaleem Ullah, an official with the district emergency services, who said that 71 people had died with another 43 were injured - 11 of whom are still in a critical condition.
Full article: https://www.asiaone.com/asia/train-fire ... g-accident
Cambodia Expats Online: Bringing you breaking news from Cambodia before you read it anywhere else!