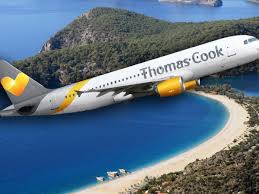 The British government is prioritising passengers stranded by the collapse of Thomas Cook as it prepares for the largest repatriation since the second world war.

The UK's Civil Aviation Authority (CAA) said today the tour operator has "ceased trading with immediate effect", with all bookings and flights cancelled.
The CAA is now tasked with bringing 150,000 British travellers home in what is the largest peacetime operation of its kind. About 600,000 people are affected by the cancellations.

"We are doing all we can to get passengers home who can no longer travel on Thomas Cook services," a post from the office's Twitter account read.
"Due to limited aircraft availability, we are prioritising passengers in areas with limited alternative options."

British Prime Minister Boris Johnson said the government was right not to bail out the tour company, arguing travel firms should do more to ensure they don't collapse.
The 178-year-old tour operator ceased trading Monday after failing to secure 200 million pounds ($360 million) in rescue funding.

full https://www.9news.com.au/world/thomas-c ... d5d9fb83d9
The idea that seeing the world is going from place to place to look at obvious things is an illusion natural to dull minds.
Top
Post Reply Previous topicNext topic
1 post • Page 1 of 1