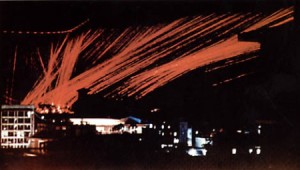 John Malch â€¢
Fly low, blasting everything in front of you to pieces was one version. The other was send light helos, like the Loach, teamed up with two gunships. Together known as "Pink Teams" they would fly low trying to draw enemy fire. When the V.C. opened up, the gunships would strike quickly with rockets and machine guns. The tactic known as Recon by Fire is just one of the operations I experienced firsthand in â€™gun shipsâ€™ lighting-up the night near Dong Ba Tien (Cam Ranh AFB) and Phu Hiep (Tuy Hoa AFB).

The Fixed wing gunship and helicopters were the most devastating weapons used in the Vietnam War, the Viet Cong's worst nightmare - the gunship. "To the grunts, they were a god-send - to the enemy they were beasts from hell - â€œSpooky ~ aka â€™Puffâ€™, Spectre, Shadow, Stinger and Black Spotâ€.
Fixed-wing Gunships & Heliopters
C-131 Samaritan was probably the first aircraft used as a flying gunship
AC-47D, gunships used call sign "Spooky" but were commonly referred to as "Puff".
Lockheed C-130A was to become the best known gunship platform, the â€œSpectreâ€.
AC-119G "Shadow" and AC-119K "Stinger"
AC-123K gunship-type aircraft, â€œProject Black Spotâ€œ.

UH-1A/B/C "Huey" Gunships aka "Hogs" was the most well known.
Impressive inventory and awesome firepower

Yeah, it kinda me reminded of Saigon, circa 1968-69. At 10 p.m., the bars closed, the movie houses darken and curfew was on. Nothing good on American TV either. But way to early for sleeping alone in bed. What's a guy gonna to do. Those of us who lived in downtown apartments had the best seats up on the rooftop patios to watch the war. Believe me, it too was awesome: Each night around curfew countless heavy guns would fire rounds into the suspected Viet Cong infected areas surrounding Saigon. Every now and then B-52's would lay a carpet of real big bombs north of the city near Chu Chi which would shake our high rise like measured earthquakes. The most spectacular part of the evening was seeing parachute flares by the hundreds being drop from ancient DC-3 airplanes. These ancient planes also had rapid-fire mini-guns which spit tracer rounds out like flowing lava around the perimeter. From our vantage point, we'd be sitting in our Papasan chairs, hoisting a Ba-Mi-Ba and intermittently take a drag from our Salem. OMG! Totally awesome!

My vantage point in 1968 was atop of the President Hotel on Tran Hung Dao, Saigon. In early 1969 I lived briefly at the Bekins' villa adjacent 259 Truong Quoc Dung Dao (USAID Towers) where I would venture on occasion's to the rooftop. One time I got stuck with a friend after curfew at the Caraville Hotel and we spent the entire night on the roof. I paid the help beaucoup piastre to keep their mouth shut and the booze flowing-in. Yes, good memories and very bad hangovers.

When Puff Ruled The Night: The Birth Of Gunships

Using side-firing weapons on aircraft can be traced back to 1927, when a concept was demonstrated by fixing a .30 caliber machine gun to the side of a biplane and flying a simple
maneuver known as a pylon turn. Named after the air racing term, it involved positioning an aircraft in a gentle bank and orbiting it around a fixed point as the gun fired continuously. Yet, when Army brass watched the demonstration, which showed promise, they dismissed it as strange and useless, ordering the idea shelved as they moved on to more familiar things. Another effort was made to garner interest in 1939, just as war clouds loomed, but it too fell by the wayside. Ultimately, it would take an American commander in Queensland, Australia to force the Air Corps to realize the potential of the idea.

Re: Puff the Magic Dragon

But they still lost the war...