Yeah, that place out 'there'. Anything not really Cambodia related should go here.
Post Reply Previous topicNext topic
2789 posts

SHANGHAI (AFP) - The food market where China's deadly virus surfaced was a smorgasbord of exotic wildlife ranging from wolf pups to species linked to previous pandemics such as civets, according to vendor information and a Chinese media report.

The Huanan Seafood Market in the central city of Wuhan came under greater scrutiny on Wednesday (Jan 22) as Chinese officials said that the virus which has so far killed nine people and infected hundreds may have originated in a wild animal sold at the food emporium.

Past deadly epidemics have been blamed on wild animals - severe acute respiratory syndrome (Sars) was linked to Chinese consumption of civet meat - setting the Chinese authorities up for potential embarrassment if lax supervision of wildlife trafficking is found at fault in the latest outbreak.

A price list circulating on China's Internet for a business at the Wuhan market lists a menagerie of animals or animal-based products, including live foxes, crocodiles, wolf puppies, giant salamanders, snakes, rats, peacocks, porcupines, camel meat and other game - 112 items in all.

"Freshly slaughtered, frozen and delivered to your door," said the price list for the vendor, "Wild Game Animal Husbandry for the Masses".

Dr Gao Fu, director of the Chinese centre for disease control and prevention, said in Beijing on Wednesday that authorities believe the virus likely came from "wild animals at the seafood market" though the exact source remains undetermined.

China bans the trafficking of a number of wild species or requires special licences, but regulations are loose for some species if they are commercially farmed.

AFP was unable to directly confirm the authenticity of the price list. Phone calls to the vendor went unanswered, and attempts to connect to its social media accounts were rejected.

The Beijing News published a photo on Tuesday showing the same vendor's now-shuttered store front, as authorities in white hazmat suits milled about.

The paper also quoted other merchants as saying that trade in wildlife took place up until the market was shuttered for disinfection shortly after the outbreak.

A number of the early sufferers of the virus, now known as the 2019 Novel Coronavirus (2019-nCoV), were employees of the market.

Many exotic species are still widely consumed in China or other Asian countries, where they are considered a delicacy - like the civet or some rats or bats - or for purported health benefits that are unproven by science.

Dr Walzer said 70 per cent of all new infectious diseases come from wildlife, with habitat encroachment increasing the chances of pathogens spreading.

"Wildlife markets offer a unique opportunity for viruses to spill over from wildlife hosts," he said.

"It is essential to invest resources not only into discovering new viruses, but more importantly, in determining the epidemiological drivers of... (the) spillover, amplification, and spread of infectious diseases."

Bats are thought to have spawned Sars, which in 2002 to 2003 killed hundreds of people in Asia, mostly China.

Sars was also found in civets in wildlife markets in China, with many scientists believing the bat virus infected the cat-like creatures and then humans who ate them.

Following Sars, China cracked down on consumption of civets and some other species, but conservationists say the trade continues.
https://www.straitstimes.com/asia/east- ... -wolf-pups
Cambodia Expats Online: Bringing you breaking news from Cambodia before you read it anywhere else!

If this coronavirus showed up in Sihanoukville, what’s the likelihood that the Cambodian Public Health authorities could detect and contain the outbreak (and thus protect all the expats living in the Kingdom of Wonder)?
Top

newkidontheblock wrote: ↑Thu Jan 23, 2020 7:24 am If this coronavirus showed up in Sihanoukville, what’s the likelihood that the Cambodian Public Health authorities could detect and contain the outbreak (and thus protect all the expats living in the Kingdom of Wonder)?

China spends 6x more per capita on health care than Cambodia. China also has many mechanisms to control peoples movement and behaviour that Cambodia does not. SFA could be done to protect the ex-pats and Cambodia's first obligation would be to protecting its citizens.
Top

getting bad, at least, unlike the SARS virus, the Chinese are stepping up and shutting down all travel out of Wuhan and even internal travel.


Wuhan, a city of more than 10 million in the central Chinese province of Hubei, is effectively in lock down following a decisive attempt to isolate the source of the Novel Coronavirus.
Wuhan has ‘temporarily’ closed its airport, rail station and main roads out of the city. All city public transport services are all suspended too, as authorities scramble to contain the virus.

Chinese officials say they are adopting “Class A prevention and control measures”, usually rolled out for major outbreaks for serious medical situations, including cholera outbreaks. Chinese health officials now have sweeping powers to lock down affected areas and quarantine patients. China previously used such measures in 2009 to tackle an outbreak of H1N1.

BUT with flights direct to Europe, Japan & Thailand is it to late?
Yesterday 7 dead, this morning up to 17. Sars killed 774 over 8 months in 37 countries.
Thailand expects up to a million Chinese this weekend for new years


Chinese boy, 10, lands in Phuket suspected of carrying Wuhan flu
PHUKET: A 10-year-old boy from China suspected of being infected with the Wuhan coronavirus is in isolation at Vachira Phuket Hospital after he landed in Phuket on a direct flight from Wuhan with his parents last night (Jan 21).
Phuket Public Health Office (PPHO) Chief Thanit Sermkaew said that the boy had an elevated body temperature and exhibited “likely symptoms” of being infected with some form of influenza or pneumonia.

In the last week, the number of confirmed infections has more than tripled and cases have been found in 13 provinces, as well as the municipalities of Beijing, Shanghai, Chongqing and Tianjin. The deaths have all taken place in Hubei province. The commission said more than 2,000 close contacts have been identified and more than 1,000 were under current medical watch.

https://www.theguardian.com/world/2020/ ... death-toll
Cambodia Expats Online: Bringing you breaking news from Cambodia before you read it anywhere else!

A total lockdown of Wuhan since 10am this morning? Yeah, right:

Thinking about it, I might have been jumping to conclusions. Maybe this is a flight without passengers to get the aircraft out of Wuhan.
Top

The latest is that it's greatly under reported/ undiagnosed and very interestingly the reservoir could be snakes. That makes it even more novel than it was because of its rarity. Mammals are the usual host before the jump to humans.
And he sang as he watched and waited till his billy boiled
Top 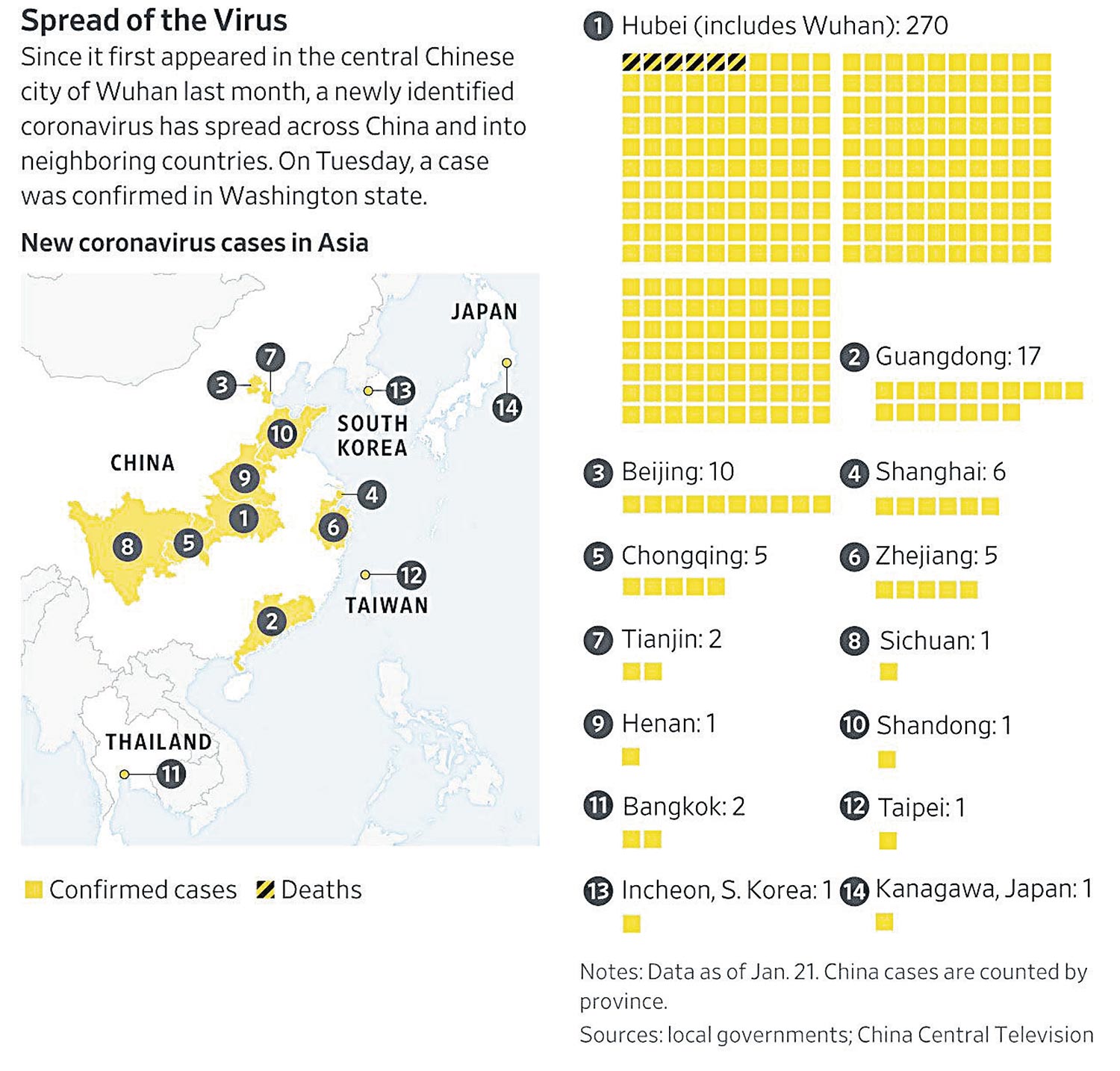 Coronavirus: panic and anger in Wuhan as China orders city into lockdown
Supermarket shelves are empty and face masks have sold out as residents of city at the centre of the deadly virus hoard supplies and retreat inside
Lily Kuo in Beijing
Thu 23 Jan 2020 05.45 GMT

A sense of panic has spread in the central Chinese city of Wuhan as the city of 11 million was put on lockdown in an attempt to quarantine a deadly virus believed to have originated there.

On Thursday, authorities banned all transport links from the sprawling city, suspending buses, the subway system, ferries and shutting the airport and train stations to outgoing passengers.

Nearby Huanggang also suspended its public bus and railway system from the end of Thursday.

In Wuhan, supermarket shelves were empty and local markets sold out of produce as residents hoarded supplies and isolated themselves at home. Petrol stations were overwhelmed as drivers stocked up on fuel, exacerbated by rumours that reserves had run out. Local residents said pharmacies had sold out of face masks.

Few pedestrians were on the street and families cancelled plans to get together for the Chinese New Year holiday. Special police forces were seen patrolling railway stations. Residents and all government workers are now required to wear face masks while in public spaces.
https://www.theguardian.com/world/2020/ ... o-lockdown
Cambodia Expats Online: Bringing you breaking news from Cambodia before you read it anywhere else!

newkidontheblock wrote: ↑Thu Jan 23, 2020 7:24 am If this coronavirus showed up in Sihanoukville, what’s the likelihood that the Cambodian Public Health authorities could detect and contain the outbreak (and thus protect all the expats living in the Kingdom of Wonder)?