Yeah, that place out 'there'. Anything not really Cambodia related should go here.
Post Reply Previous topicNext topic
2988 posts

Almost half of the deaths have been recorded since late March when the latest wave broke out in the nation of 1.3 billion people.

The capital, Delhi, meanwhile stopped vaccine shots for people aged under 45 because it has run out of jabs.
https://www.theguardian.com/world/2021/ ... an-variant

There testing numbers took a dip in recent weeks, from 2m to 1.4m a day. That is still a positive rate of nearly 20% at it's peak and 2 million tests isn't a lot with a 1400 million population.

Is it possible that India will achieve herd immunity long before and vaccine program can catch up?

Overburdened labs, infection among staff, and backlogs are said to be reasons for low testing rates

This might be a grim bright cloud in all the badness over there.

The junta plays the classic us vs. them. Keeps the military firmly intertwined into the ‘us’ side. Once the virus starts hitting the junta and all the military relationships that keep it in power, they might change their tune.

Unless the ‘us’ have all been vaccinated by western vaccines already, that is.
Top

A coronavirus outbreak on Mount Everest has infected at least 100 climbers and support staff, a mountaineering guide said, giving the first comprehensive estimate amid official Nepalese denials that the disease has spread to the world’s highest peak.

Lukas Furtenbach of Austria, who last week halted his Everest expedition due to virus fears, said on Saturday one of his foreign guides and six Nepali Sherpa guides had tested positive.

“I think with all the confirmed cases we know now confirmed from (rescue) pilots, from insurance, from doctors, from expedition leaders, I have the positive tests so we can prove this,” Furtenbach said from Nepal’s capital, Kathmandu.

“We have at least 100 people minimum positive for Covid in base camp, and then the numbers might be something like 150 or 200.”

He said it was obvious there were many cases at the Everest base camp because he could visibly see people were sick, and could hear people coughing in their tents.
https://www.theguardian.com/world/2021/ ... says-guide
Cambodia Expats Online: Bringing you breaking news from Cambodia before you read it anywhere else!

Thailand’s cumulative caseload has more than quadrupled since 1 April, rising to almost 130,000, after infections spread in its cramped prisons, densely populated areas of the capital and construction sites.

In neighbouring Malaysia, field ICUs are being established to cope with the increase in patients with severe illness, while one hospital converted a shipping container to a makeshift morgue because its facility was overrun. The country reported almost 7,000 cases on Sunday.

Vietnam and Singapore – both widely praised for their success in containing the coronavirus – are also racing to contain clusters, and have introduced lockdown measures.

Cases are far lower than the peaks seen in other areas of the world, but health experts say the outbreaks are a warning sign that vaccines must be distributed more evenly.

“It is entirely possible that because of the inequity that we are starting to see in accessing vaccines that the epicentre [of the pandemic] will shift,” said Teo Yik Ying, a professor at the Saw Swee Hock School of Public Health, National University of Singapore.

He did not believe the recent outbreak in Singapore was due to a lack of compliance with health measures, but said it was instead driven by the more aggressive nature of the new strain B.1.617, which was first detected in India. “Our defences that we put in place that have worked very well for the past one year now seem to be being breached by the coronavirus,” he said.

“It is the speed that is frightening. We’ve seen how we have got four generations of spread – meaning from the index case to the primary transmission, and then to secondary transmission and so on – within a period of 10 days. Compared to what we were faced with last year, it is quite a different situation,” he said.

Vietnam, which has imposed lockdowns in some districts in a race to contain new clusters, has fully vaccinated less than 1% of its population. Its recent outbreak has led to more than 2,000 new cases since late April – almost 40% of the 5,119 cumulative infections detected in the country since the pandemic began.
https://www.theguardian.com/world/2021/ ... f-vaccines
Cambodia Expats Online: Bringing you breaking news from Cambodia before you read it anywhere else!

It's fair to say that it's clear officialdom has no clue whatsoever of the situation anymore of what is what anymore of the covid19 situation. Since the boss handed the responsibility down to the underlings it's been a wish wash account in all aspects, there's no interest for what is going down on ground levels, fact and figures don't tally up, information is not clear to the public, the foreign visitors are not even a consideration, only a mention if they add to braking the rules. It is considerable to say that without HE at the helm the situation will get only more confusing.
Always "hope" but never "expect".
Top

PublishTime：2021-05-24
On May 24, the Central Epidemic Command Center (CECC) announced 339 new confirmed cases of coronavirus disease 2019 (COVID-19) in Taiwan. Of the 339 new cases, 334 are indigenous and the other five are imported.
Among the five imported cases, three arrived from India; one arrived from the Philippines, and one arrived from Nepal. Furthermore, the CECC retroactively added 256 cases to the total number of COVID-19 cases calculated over the past week. A total of 595 cases were recorded. The CECC also announced six deaths today.
https://www.cdc.gov.tw/En/Bulletin/Deta ... typeid=158

* To compare, Taiwan reported a total of 291 new cases of Covid-19 on 23 May 2021.
Cambodia Expats Online: Bringing you breaking news from Cambodia before you read it anywhere else!

The Economist Magazine have a podcast which offers some good information without fuss or flamboyance.

This one is well worth listening to. It talks about Cambodia and our neighbours, plus Australia etc and how they are going to re-integrate into the world regarding travel.

A “ZERO-COVID” strategy has kept cases to a minimum in a handful of Asia-Pacific countries. How can they use vaccines to end their isolation?

Here is the link for someone interested global corona situation. https://www.worldometers.info/coronavirus/
Top

mossie wrote: ↑Wed May 26, 2021 6:06 pm Here is the link for someone interested global corona situation. https://www.worldometers.info/coronavirus/

about 2% deaths worldwide
When I need advice about life, I just check in here.
Top

It's looking to me that Vietnam is not going to get the doors open until 2022 if the timing is fully dependent on vaccinating the populace of almost 100 million.

They're currently working through a very small load of AZ. But the Viets have barely scratched the surface of inoculations, with just 1 million shots. And they're just negotiating with Moderna and have a deal for 39 million doses with COVAX whose cupboard is almost bare. The forthcoming restock with Chinese shots is not going to sit well with the Vietnamese. 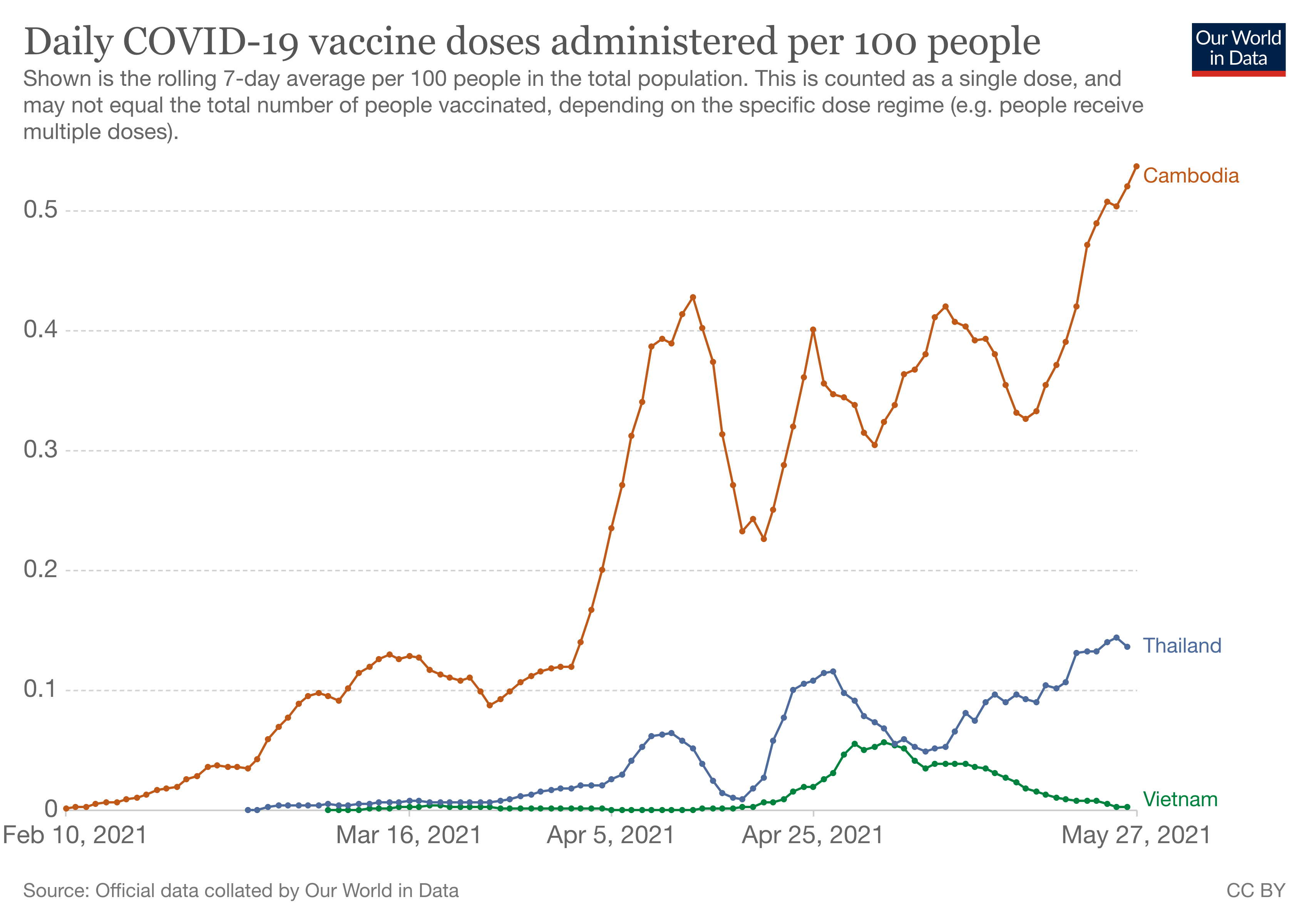 Lots of begging by the health minister in this Viet Nam News story. But the queue, which includes the Thais who are also dealing with Zuellig, is very very long:

Minister Long and the pharmaceutical company talked about the “capacity and the conditions to provide Moderna COVID-19 vaccines to Việt Nam.”

Health minister Long asked Zuellig Pharma to supply vaccines “at the earliest time and with the most appropriate price” to deal with the COVID-19 pandemic, as the country is currently suffering from a major fourth wave of infections that has seen thousands of new cases.

The Zuellig Pharma representatives said they would discuss Việt Nam’s proposals with Moderna.

The same day, health minister Long also held talks with several foreign officials and partners – including representatives from the Japanese and South Korean embassy in Hà Nội, as well as delegates from Indian, Europe, UK, Japanese commerce associations and South Korean companies including Samsung, SK, and LG regarding supplies of COVID-19 vaccines to Việt Nam as well as vaccinations for workers in industrial zones and manufactories.