Yeah, that place out 'there'. Anything not really Cambodia related should go here.
Post Reply Previous topicNext topic
2872 posts

It's been frustrating to watch India organise a series of super spreader events. The Prime Minister hosted large rallies ahead of elections and a religious festival was moved forward from next year because the dates were considered auspicious.
Scarier than malaria.
Top

ali baba wrote: ↑Fri Apr 23, 2021 10:17 pm It's been frustrating to watch India organise a series of super spreader events. The Prime Minister hosted large rallies ahead of elections and a religious festival was moved forward from next year because the dates were considered auspicious.

The Kumbh Mela, being held now in Hardwar , 120 million in one area. 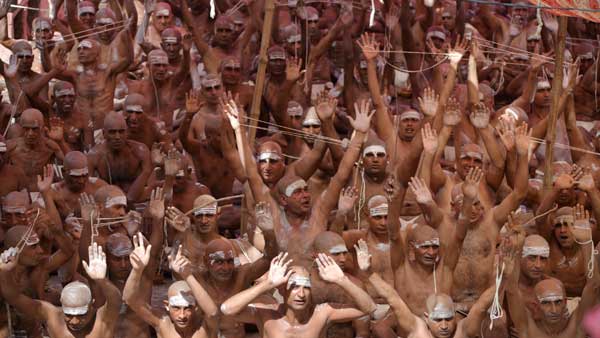 LONDON -- Elephants, horses and an expected crowd of more than 120 million people began to descend on Prayagraj, India, Tuesday, marking the beginning of Kumbh Mela, the world’s largest religious gathering.

The 49-day holy festival takes place in the northern city of Prayagraj at the confluence of the two rivers considered sacred to Hindus: the Ganges and the Yamuna, in the state of Uttar Pradesh. Devotees believe that a dip in the rivers can absolve them of their sins.

The Indian government has said that it expects millions of people from across India and abroad to visit the area, easily making it the largest gathering of people for a religious event anywhere in the world. By comparison, approximately 2.4 million people gathered in Mecca for the Hajj last year, according to the BBC.

god help those in India, there going to need it
In a nation run by swine, all pigs are upward-mobile and the rest of us are fucked until we can put our acts together: not necessarily to win, but mainly to keep from losing completely. HST
Top

This thing is just getting going. Higher highs and higher lows. If it were a stock chart it would be screaming BUY.

India... This is what out of control looks like. Is it the idiotic behaviour of the religious and the politicians or is it their new double mutated variant, or a bit of both? Their charts look like Bitcoin.

There has been a community outbreak in Australia, the first since April 2020.
Interesting story (it spread from the quarantine hotel) and relevant for all other countries.
Watch from 17:00.

Director General of the National Center for Laboratory and Epidemiology under the Lao Ministry of Health, Phonepadith Xangsayarath, told a press conference here on Sunday that among the new cases, 64 were detected in the capital, five in Saravan, four in Luang Namtha, two in Savannakhet, and one in Bokeo province.

All Lao citizens and foreign residents should comply with COVID-19 prevention and control measures, said Phonepadith.

The Lao government and local authorities have imposed travel restrictions and banned people from leaving their homes unless necessary.

The Lao Ministry of Health has opened more testing centers to identify new cases of the virus in a bid to contain its spread.

Dr Pierre Kory speaks about Ivermectin as a treatment for all stages of Covid - prevention, early stage, late stage and long Covid. Interesting comments also on the potential for Ivermectin in treating other serious viruses, such as dengue fever.


He also talks about the role of corticosteroids in the pulmonary stage of Covid.

as always, the poor are hit the hardest

Cambodia had avoided the worst health effects of the pandemic until recent months. Now, with Phnom Penh under an ever-stricter lockdown as cases spiral, it's the capital's thousands of informal, hand-to-mouth workers who are suffering as they are locked inside

It’s hard to say what full effects the social shutdown will bring, as Cambodia weighs an economic blow against the massive human cost of a national outbreak. Though some civil society groups have been scraping testimony and pleas for help from hungry people on Facebook pages and Telegram channels, much is still unclear about service provision, or lack thereof, in the red zones and beyond.

What’s obvious is that the measures come at a time when many are already vulnerable, a year into a pandemic that has plunged the Cambodian economy into the red after a two decade-long run of strong growth.

The items were not like what the Prime Minister said, so we refused to take it. There was no $75 [300,000 riel], no canned fish. Just rice, noodle, fish sauce and soy sauce

https://southeastasiaglobe.com/phnom-pe ... 44700f68e1
In a nation run by swine, all pigs are upward-mobile and the rest of us are fucked until we can put our acts together: not necessarily to win, but mainly to keep from losing completely. HST
Top

In Cambodia, extended Phnom Penh coronavirus lockdown leaves garment workers, market vendors hungry
Cambodia has closed markets in its capital and extended a two-week lockdown, designating some areas red zones and prohibiting people from going out
This has created a food emergency for many textile and other workers, with a labour analyst calling the government’s response ‘out of control’


The Cambodian government’s two-week lockdown to contain a surge of Covid-19 cases in the capital, Phnom Penh, has cut off food supplies for thousands of garment workers, market vendors and others who survive on a day-to-day income.
Prime Minister HE announced the restrictions on April 14, which allowed only people in essential jobs such as delivery, restaurants and food and medical supply factories to work, with families permitted to visit markets three times a week. Days later, the government declared four communes and three villages “red zones”, banning residents from leaving their homes except for medical reasons.

On Saturday, Phnom Penh City ordered all public markets closed for two weeks, further straining residents’ access to food.
Coronavirus: Cambodian PM HE warns ‘we are on the brink of death’
15 Apr 2021

Garment worker Un Sopheap, 35, has been in quarantine since April 9, after neighbours in her block of small rental rooms tested positive for Covid-19. She said she received part of her salary and a small stipend – about US$135 – while quarantining but now cannot go out to buy fresh food after the block was designated a red zone.

This meant she went four days in a row eating only rice with soy sauce, sometimes with egg.
“When I only eat that type of food …. I don’t have enough energy and I can’t leave my room to get fresh air from outside, plus it’s a very small room,” she told This Week in Asia. “It makes me frustrated.”

Police officers armed with firearms and wooden batons constantly patrol the block, Sopheap said, adding: “We’re scared of them.”
Some officers have been caught confiscating vegetables from vendors who set up ad hoc markets in red zones, while farmers living outside the city complain their produce is rotting as vendors are unable to sell it.
The government initially handed out rice, instant noodles, canned fish and sauces but quickly changed to selling the products after the premier claimed the government would “face difficulty” to respond to all families’ needs, notably including a bottled water brand owned by the Prime Minister HE’s daughter.

Meanwhile, the number of people begging for food is rising: more than 48,000 people joined a Telegram chat set up by the city to apply for emergency food aid. One user wrote on Friday evening: “I requested five days ago and I haven’t got [anything].”
Kong Savorng, chief of the Choam Chao I commune in one of the red zones, did not answer telephone questions put to him but could be heard telling another person that they had run out of canned fish, soy sauce and fish sauce to distribute to residents, leaving only donated rice and bottled water.
World Food Programme Cambodia director Claire Conan said their understanding of the full extent of hunger in the red zones “remains limited” because of their lack of access and fast-changing government policies. She said the agency had been monitoring how Covid-19 disrupted supply chains and caused more to go hungry before the lockdown, noting that special dietary needs for the elderly, pregnant women and new mothers “will need to be addressed should the measures extend in time”.


The government on Saturday ordered tens of thousands of people living in Phnom Penh’s red zones to be tested for Covid-19, without outlining how they should do so.
Khun Tharo, coordinator for labour advocacy group Central, called the government’s response “out of control”, noting that dense garment factories and their dormitory housing blocks were long thought to be high-risk for Covid-19 transmission.
He added that quarantining red zone residents in small living spaces would not help their health either. “It’s really too late [now] and the government has been slow in its response to the situation.”


Cambodia’s biggest Covid-19 outbreak started in late February, when two Chinese nationals escaped quarantine. Before then, it had reported relatively few cases, but by Sunday its total had reached 9,975, with 616 new daily infections. There were also three deaths, taking the total to 74.

The recent surge has racked the garment industry, forcing all textile factories in the greater Phnom Penh area to close.
Din Han Enterprise – a producer for Adidas and one of the hotspots in the outbreak with more than 500 infections – is located in an industrial estate full of factories and the virus quickly spread to its neighbours.
Local union president Bun Vann spent part of last week calling coworkers at New Orient Factory – a manufacturer for The North Face – to go for testing after more than 20 colleagues were infected.
“In the factory we don’t have the standard of social distancing, as we didn’t have any space inside the factory,” he said, adding that Din Han and New Orient had the same owners, and workers often lived together, making transmission easy.
Cambodians outraged by artist who added ‘smiles’ to Khmer Rouge victims’ photos
12 Apr 2021

Cambodian Labour Confederation president Ath Thorn warned that workers’ next biweekly pay period was approaching and most would not even be able to receive money transfers without leaving their homes.
The Labor Ministry and Garment Manufacturers Association of Cambodia urged factories to offer workers some financial support, although Thorn said they were not obliged to make such payments. But the state could be offering more to those in immediate need, he saidd.
“I think the government is not a rich government, we all agree,” he said. “But at least [it should] respond to the poor and those who are made poor under the lockdown.”
Top

Not a rich government? No we don't all agree even if it probably is illegal not to agree
Top